You are Here: Home » Bread Recipes : All » Cinnamon Raisin Bread

Delicious yeast bread, with a swirl of cinnamon and raisins. Great toasting bread!

Even though we’re dodging the worst of today’s snow storm here in the usual “snow belt”, it’s still officially a snow day (school buses cancelled) and that means it’s time to bake some bread.
There is just something so comforting about toasted cinnamon raisin bread on a cold winter morning. The flavours and the smell of warm cinnamon, the snow falling out the window and a warm cup of coffee are about as close to perfection as I can think of at the moment.

This is my favourite cinnamon raisin bread recipe. It has a lovely texture and flavour and is unbelievably good toasted. I have recently discovered Saigon Cinnamon and used it in this bread. The cinnamon flavour is so distinct and pleasant, especially if you are a cinnamon lover. It is a bit stronger than regular cinnamon but with such pure flavour. I highly recommend it for this bread, where cinnamon is the star.

You can make this bread with either active dry or instant yeast. The instructions will work well for either. If you like, you can replace up to 2 cups of the flour with whole wheat. This recipe will yield two loaves and this bread freezes well.
Print Pin Rate Add to your personal Recipe BoxGo to your Recipe Box
Prep Time20 mins
Cook Time30 mins
Rising Time1 hr 30 mins
Total Time50 mins
Servings (adjustable): 2 loaves

More Cinnamon Breads from the Seasons and Suppers Archives 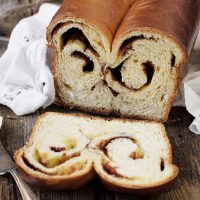 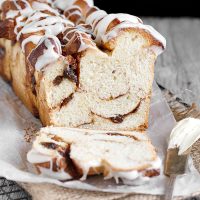 “One of the best Food Blogs in Canada.”
– National Post

Are you looking for simple, seasonal, everyday recipes? Do you love classic, homey, comforting food, but with a modern, real food update? Good! Me, too! :)

I’m Jennifer, from my kitchen in Muskoka, Ontario Canada. You can also find me here …