You are Here: Home » Jams and Jellies » Clementine Vanilla Marmalade

I love clementines - so sweet, easy to peel and seedless! What's not to love? I always look forward to this time of year when they are plentiful. When I have an abundance, I love to make up a small batch of this clementine marmalade.

I also love this recipe for marmalade, which adapts to any citrus fruit and to as much (or as little) fruit as you'd like to use. It is also easily made without any added pectin, so you never need to worry about having it on hand. My marmalade, including some vanilla bean paste

This marmalade can be made in a couple of hours (or less!) and you don't need to worry about sealing and water baths if you don't want to. Simply jar it up and keep it in the refrigerator. This marmalade is so easy to make, it's simple to just make more when you need it. 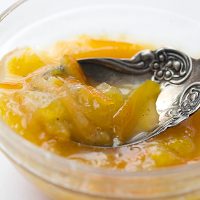 You can use any sort of citrus fruit you like (or a mixture). A kitchen scale is recommended, to get the ratio of fruit to sugar correct which will ensure a nice, gelled consistency to your marmalade. This marmalade will keep in the refrigerator for several months. The recipe below will make about 2 cups of marmalade. As the basic formula for this marmalade is equal weights of fruit and sugar, you can basically start with any amount of citrus you like and adjust accordingly. Clementine orange small batch marmalade, with added vanilla bean paste (optional)
Print Recipe Pin Recipe + Collection Go to Collections Share by Email
Prep Time 20 mins
Cook Time 15 mins
Total Time 35 mins
Course Preserves
Servings 2 cups

Leave a review, ask a question or add a comment Cancel reply