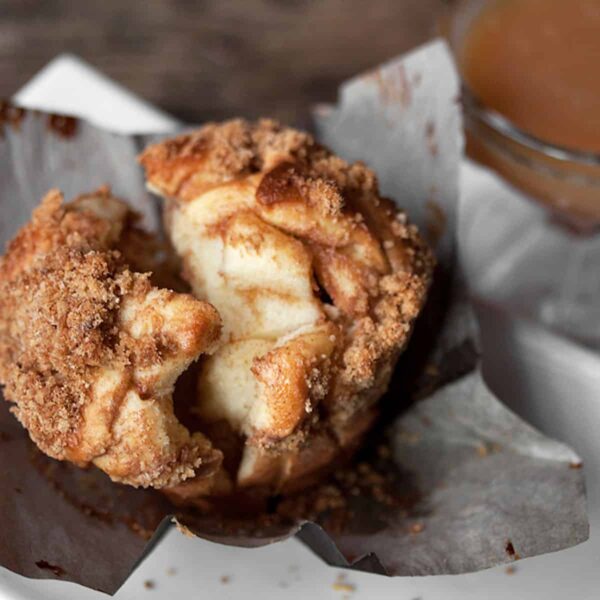 This recipe is made over two days. The streusel and caramel sauce can both be made ahead, if you prefer. You’ll need either some pre-made parchment Tulip muffin cups, or make your own with some parchment paper. Recipe adapted from Dahlia Bakery Cookbook: Sweetness in Seattle by Tom Douglas and Shelley Lance.
Jump to Recipe
5 stars from 1 rating 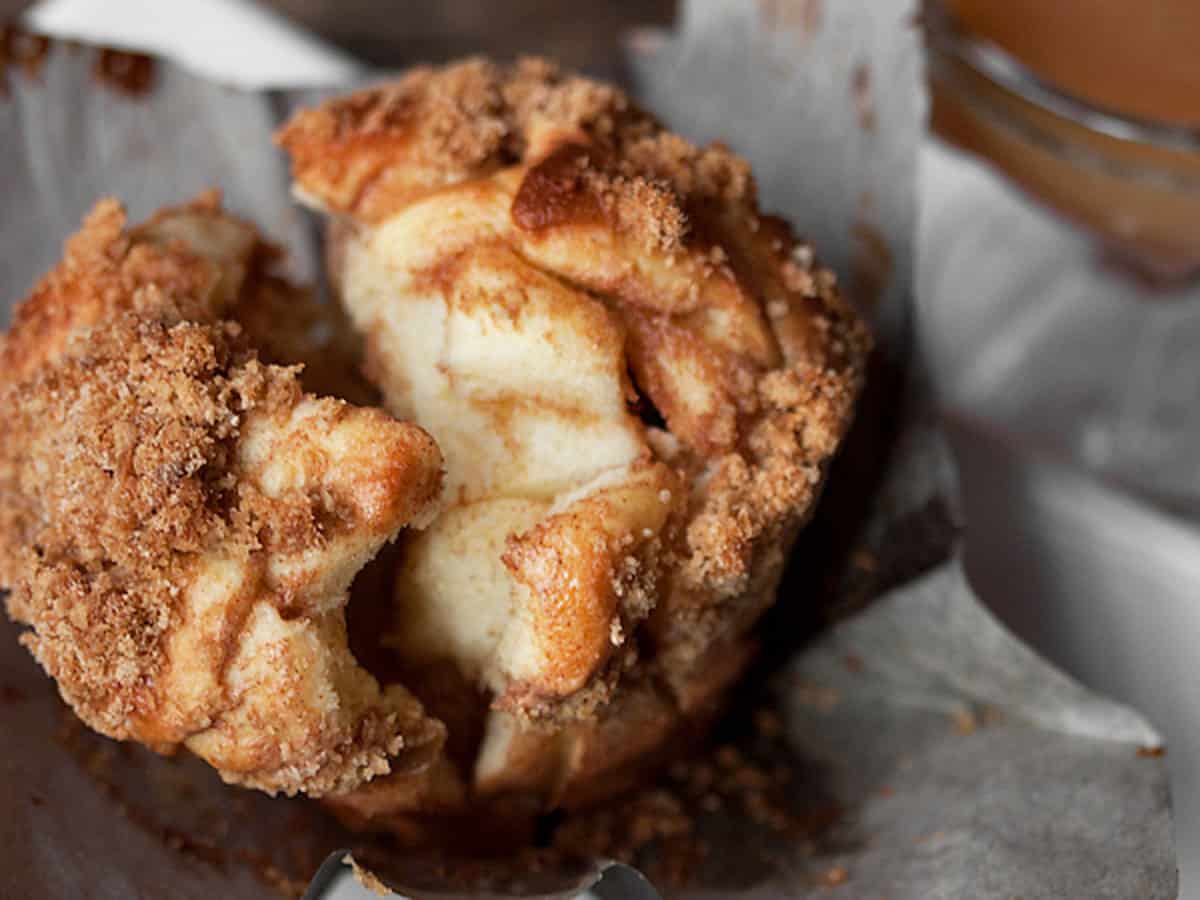 Back in September, I had the chance to visit the beautiful city of Seattle. I loved Seattle! I want to go back soon. While I was there (among other things) I drank a lot of great coffee and ate a lot of delicious food. One of those memorable meals was at Dahlia Lounge, one of several Tom Douglas restaurants in and around Seattle.

I’d heard that no meal at Dahlia Lounge would be complete without a sampling of their great desserts, most of which come from Tom Douglas’ Dahlia Bakery. We enjoyed both the famous Coconut Cream Pie and the Donuts, which come to the table fresh and warm in a paper bag and the server shakes them in the sugar. They are then served with vanilla mascarpone and jam for dipping. To.Die.For. Both desserts more than lived up to their reputation.

Flash forward a few months and I discover that Tom Douglas has published a new cookbook – The Dahlia Bakery Cookbook: Sweetness In Seattle – including recipes for all the bakery favourites like that pie and those donuts. I was so anxious to get my hands on it, I couldn’t even wait to put it on my Christmas wish list. I ordered it right away. And since it arrived, I’ve been pouring through it trying to decide what I would bake from it first. 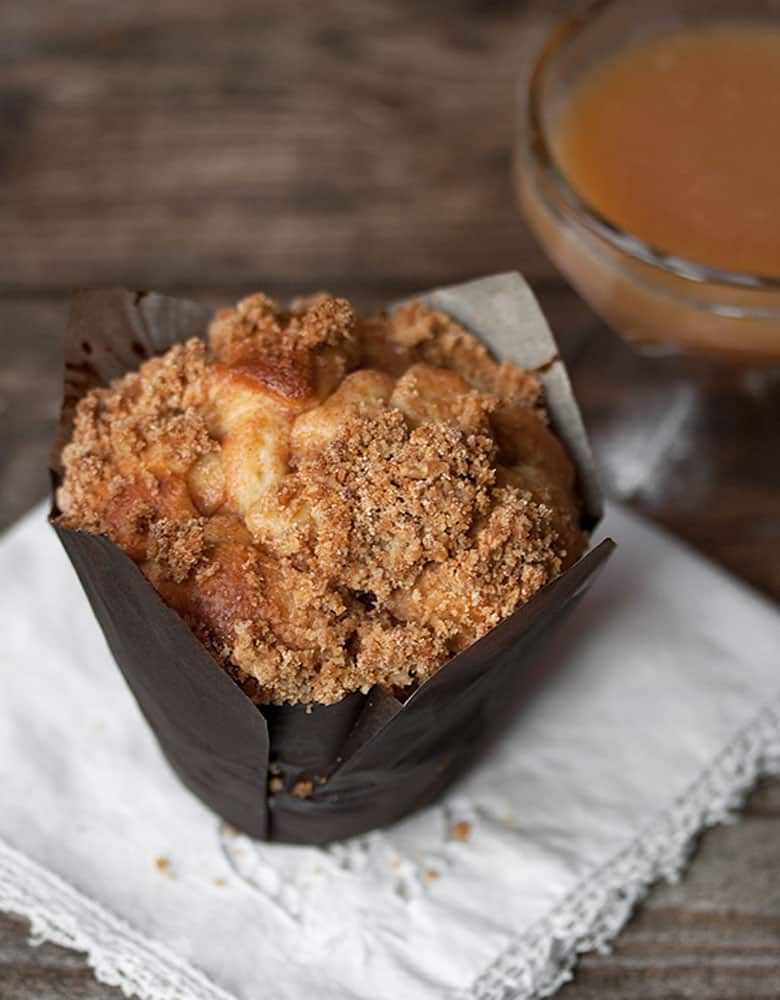 The Donuts seemed liked an obvious choice, but I was intrigued by the Monkey Bread. Made from the same brioche dough as the donuts, the dough is chopped and topped with a great streusel and baked into individual servings. And as if that wasn’t enough, they’re served with a warm caramel sauce for dipping. How could I not try that?

To say these were great would be an understatement. So indulge me for a moment while I gush about this Monkey Bread. First, the brioche was beautiful. The sour cream/sugar/cinnamon mixture that the dough bits get tossed in made for a wonderful moist bun with the sweet cinnamon weaving its way through. Finally, the cinnamon vanilla streusel that tops it all delivers both crunch and a salty note, which is perfect with the sweet caramel dip.

All that gushing said, this is a two-day baking adventure (mostly passive), that while lengthy, is not difficult. It’s the kind of recipe that you will work through a bit tentatively the first time around, but once you go through the process once, the second time will be a piece of cake monkey bread.

Much of the process for making these can be done ahead. (I believe they would also freeze well, if you wanted to make them well ahead). These are perfect for a special brunch, for a sweet gift or maybe as a Christmas morning treat. I’d say they are perfect for anytime, but they are far too dangerous to have around on a regular basis ;) 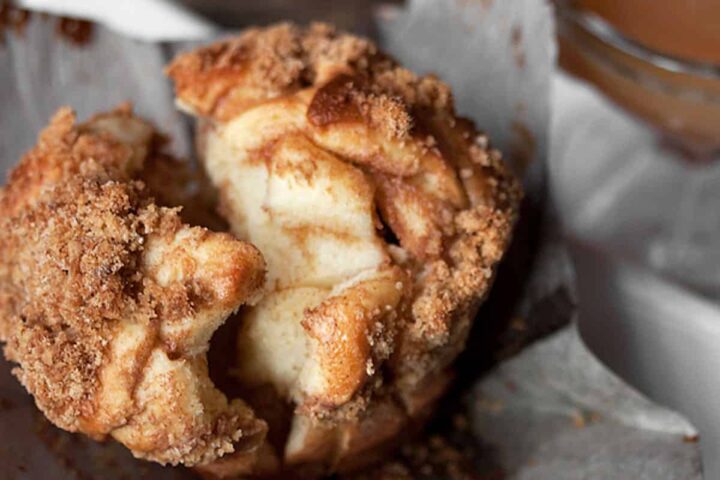 This recipe is made over two days. The streusel and caramel sauce can both be made ahead, if you prefer. You’ll need either some pre-made parchment Tulip muffin cups, or make your own with some parchment paper. Recipe adapted from Dahlia Bakery Cookbook: Sweetness in Seattle by Tom Douglas and Shelley Lance.
5 stars from 1 rating
Print Recipe Pin This Leave a Review
Prep Time: 30 mins
Cook Time: 25 mins
Resting/Rising: 11 hrs
Total Time: 55 mins
Yield: 6 servings