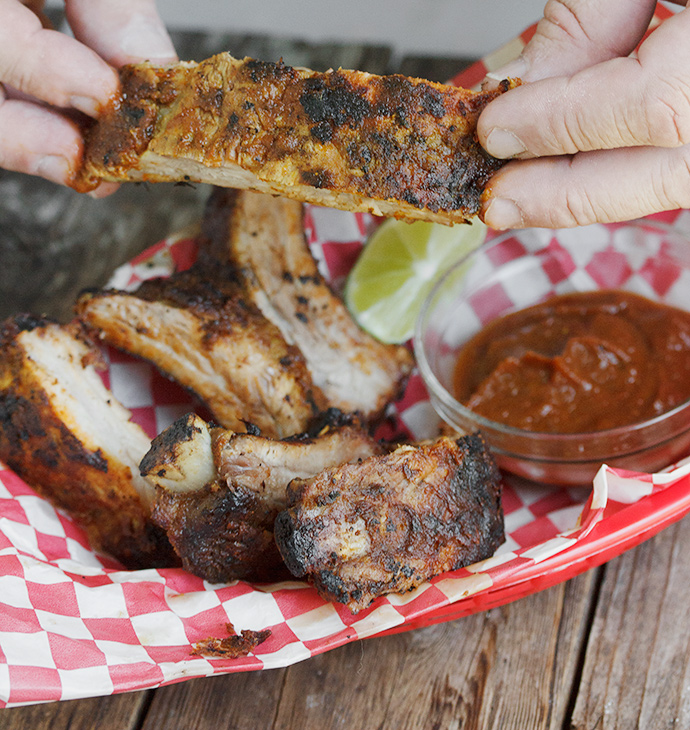 This week, I'm sharing 5 BBQ recipes (one new one every day), that I created as part of the Ontario Gas BBQ Recipe Challenge. And lucky you, there are 4 other Ontario food bloggers who are sharing their great BBQ recipes, too. You won't go wrong checking out all the other bloggers recipes, too, for some great summer BBQ inspiration!

After all the recipes are revealed by each of the bloggers, one recipe from each participant will be chosen by OGB. You'll have a chance to vote for your favourite recipe and you can win one of the weekly $100 OGB gift cards just for voting. You can find more information and links to the other bloggers participating on the Ontario Gas BBQ website.

The Challenge: To create an Indian-inspired BBQ pork rib recipe.
The Tool: The Rib Rack.
My Recipe: Tikka Masala Me BBQ Pork Ribs

I don't know about you, but I don't think I've ever eaten Indian-spiced ribs, so my inspiration list for this one was pathetically short. So for this recipe, I decided to bring the flavours of one of my favourite Indian-spiced dishes - Tikka Masala - to BBQ pork ribs. Yes, I know that Tikka Masala is more a British dish than an Indian one, but work with me here :)

Keeping faithful to tikka masala, the ribs are marinated in yogurt and spices, then cooked off a bit in the oven, before they are finished on the grill. The ribs are basted with a spicy tomato Masala sauce and extra is served with the ribs for dipping.

After marinating, I cooked these ribs off in a low oven, tightly wrapped in tinfoil for about 90 minutes. This process allows the fat to cook off and loosens the meat from the bones. The ribs are then transferred to The Rib Rack to finish cooking on the grill. Once the ribs are cooked, they spend a few minutes on the grill to be basted with the Masala sauce and to brown up. With thanks to my husband for doing the hand-modelling for this one. He was paid in ribs ;)

Tikka Masala Me BBQ Pork Ribs
Recipe Type: Main Courses
Author: Jennifer
Prep time: 30 mins
Cook time: 2 hours 30 mins
Total time: 3 hours
Serves: 4
Inspired by the popular Indian-spiced dish Tikka Masala, this recipe brings all those great flavours and tastes to BBQ pork ribs! Note that you can marinate and oven-cook ahead and then refrigerate ribs until ready to grill. The Tikka Masala sauce can also be made ahead and refrigerated.
Ingredients
Instructions
3.5.3208

I received complimentary BBQ tools and compensation for my participation in this challenge.