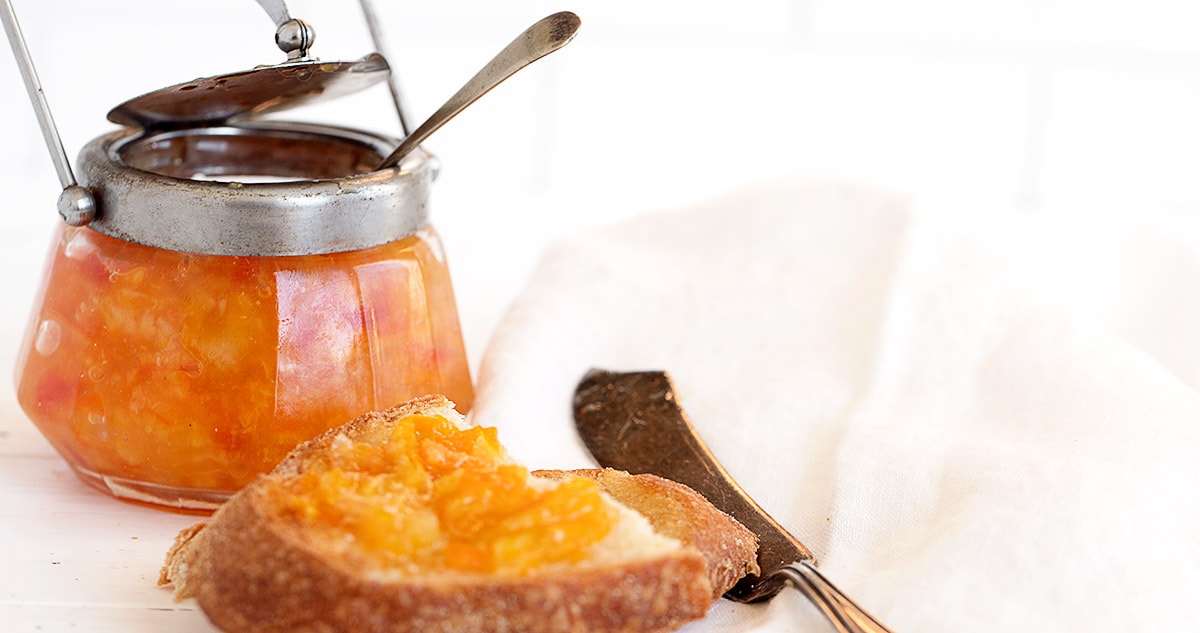 Enjoy homemade orange marmalade anytime with this quick and easy recipe. Small-batch, no pectin needed, no canning and ready in 1 hour!

It's citrus season and if you find yourself with a big bowl of wonderful oranges, maybe left-over from the holidays, there is no better use for them than to turn them into some marmalade!

There is something incredibly satisfying about making a lovely jar of marmalade. I think it's even better when you can do it all with just 3 ingredients (oranges, lemon and sugar) and in less than an hour! 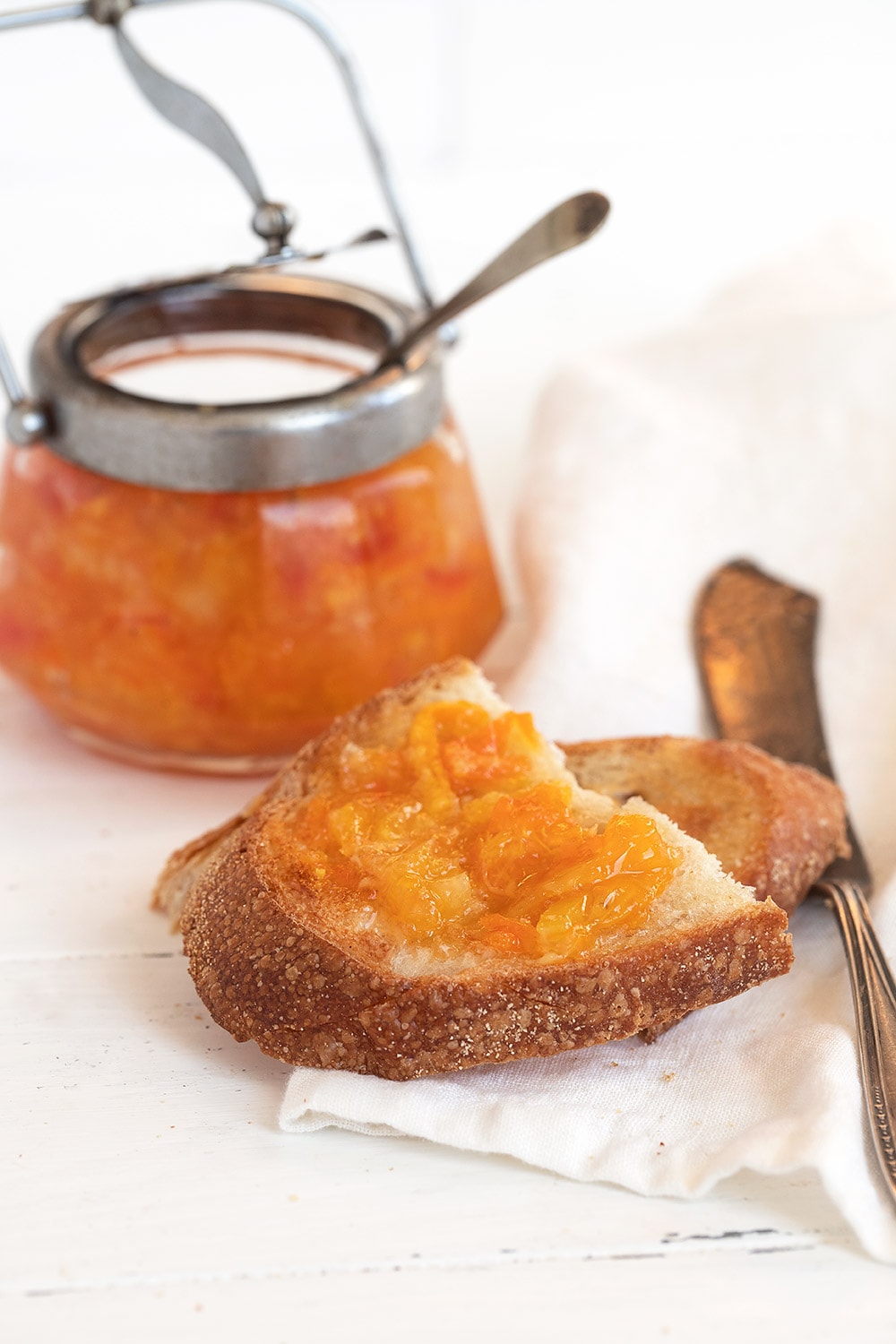 Oranges - While you can technically make orange marmalade from any orange, I recommend mandarin oranges. They are thin-skinned, with little bitter pith (the white stuff) and wonderfully flavourful. As they are also a little sweeter, your marmalade will be a little on the sweeter side, which is great if you don't like a really sour marmalade. Since there are a wide variety of mandarin orange, if you don't have a scale, as a general guide, you will need about 2 Satsumas or Halos. You will need 3 clementines (or maybe 4 if they are especially small). Again, aim for 300g of orange to start your marmalade.

If using navel oranges, you will need to be very careful to remove just the outermost orange peel for slicing, then remove and discard the pith layer, before chopping the fruit, to avoid a bitter marmalade. A vegetable peeler or really sharp paring knife works well for this. You will probably need just one navel orange if they are a good size.

If you like a more bitter marmalade and you can find some Seville Oranges, they are fine, too. Just increase the amount of added sugar to equal the weight of your oranges, so your marmalade isn't too bitter.

Sugar - Regular white granulated sugar is all you need here. Don't be tempted to reduce the amount of sugar here, or your marmalade may not set. A certain amount of sugar is needed for this process and just remember, it's a condiment, so you won't be eating the whole jar in one sitting :) In this case, I am using a 3:2 ratio or orange to sugar, so starting with 300g of oranges means 200g of sugar (or 1 cup).

If you'd prefer to use honey, instead of white sugar, you can try replacing the 1 cup of white sugar with 3/4 cup of honey (I haven't tested this).

Lemon - I generally add in the flesh and peel of 1/2 a lemon, for a little extra natural pectin and a slight bit of tangy flavour. If you find yourself lemon-less or you prefer to use just oranges, you can omit the lemon completely and still have a nice marmalade.

Optional Add-ins - If you'd like to add a little something to your marmalade, you can stir in whatever you like right at the end of cooking. I've use some chopped red glacé cherries here, as I had some left-over after holiday baking. Red Maraschino cherries are nice, too. Chopped cranberries would work, as well. For something a little different, you can stir in a teaspoon of vanilla bean paste, for a nice twist.

This is a visual summary of the steps to make this marmalade. Always refer to the complete instructions in the Recipe Card below. 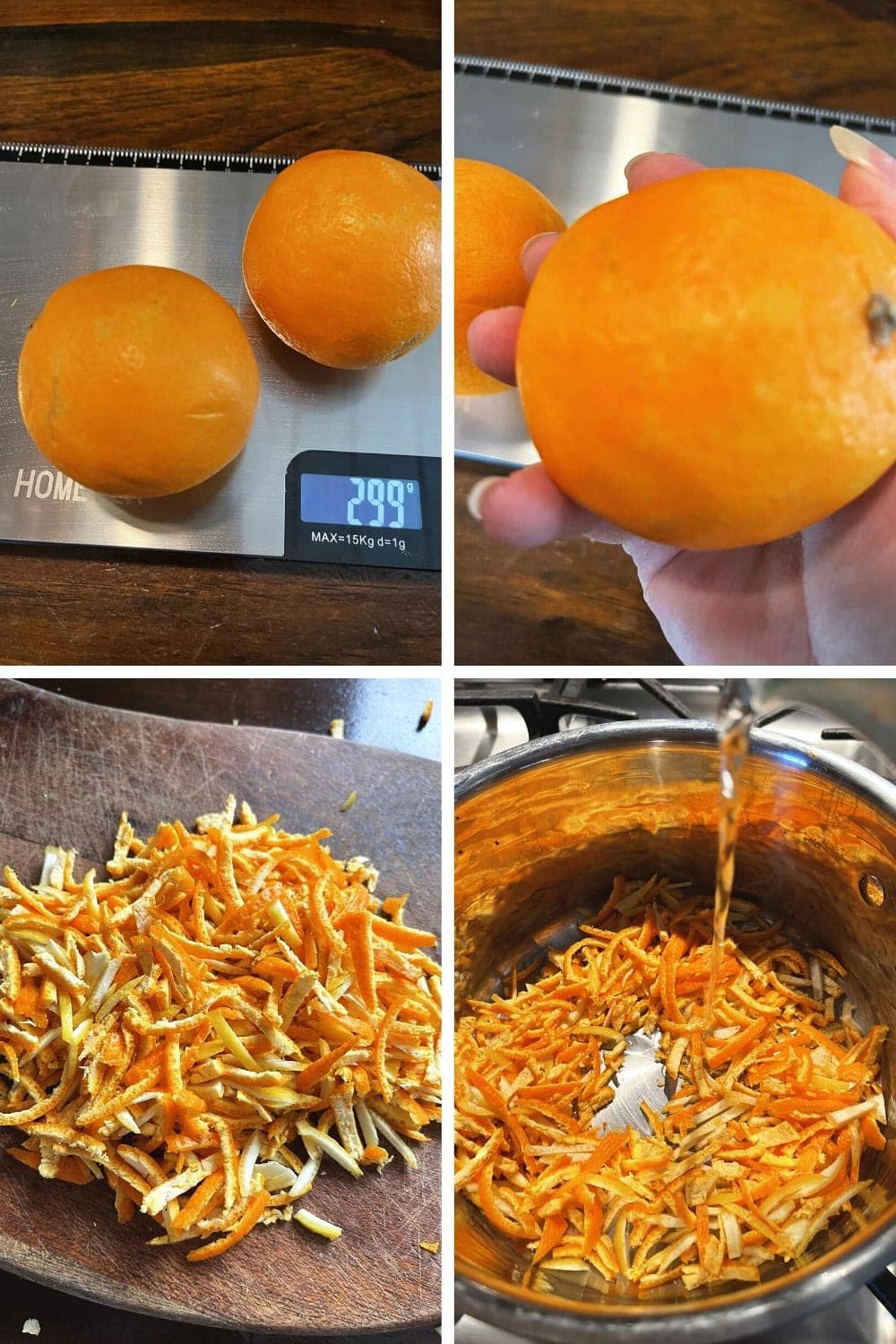 Hopefully you have a scale in your kitchen, as it takes out the guesswork. These are Halo mandarin oranges and 2 average ones will total the 300g you need. If you need to guess, I've put one in my (small) hands, so you can see the approximate size.

Take your time cutting the peel into even-sized slices, as it makes all the different in the finished marmalade. You can cut them thin or thicker, depending on how chunky you like your marmalade.

Once you have sliced up the peel, you will simmer, covered, for 20 minutes to soften the peel. 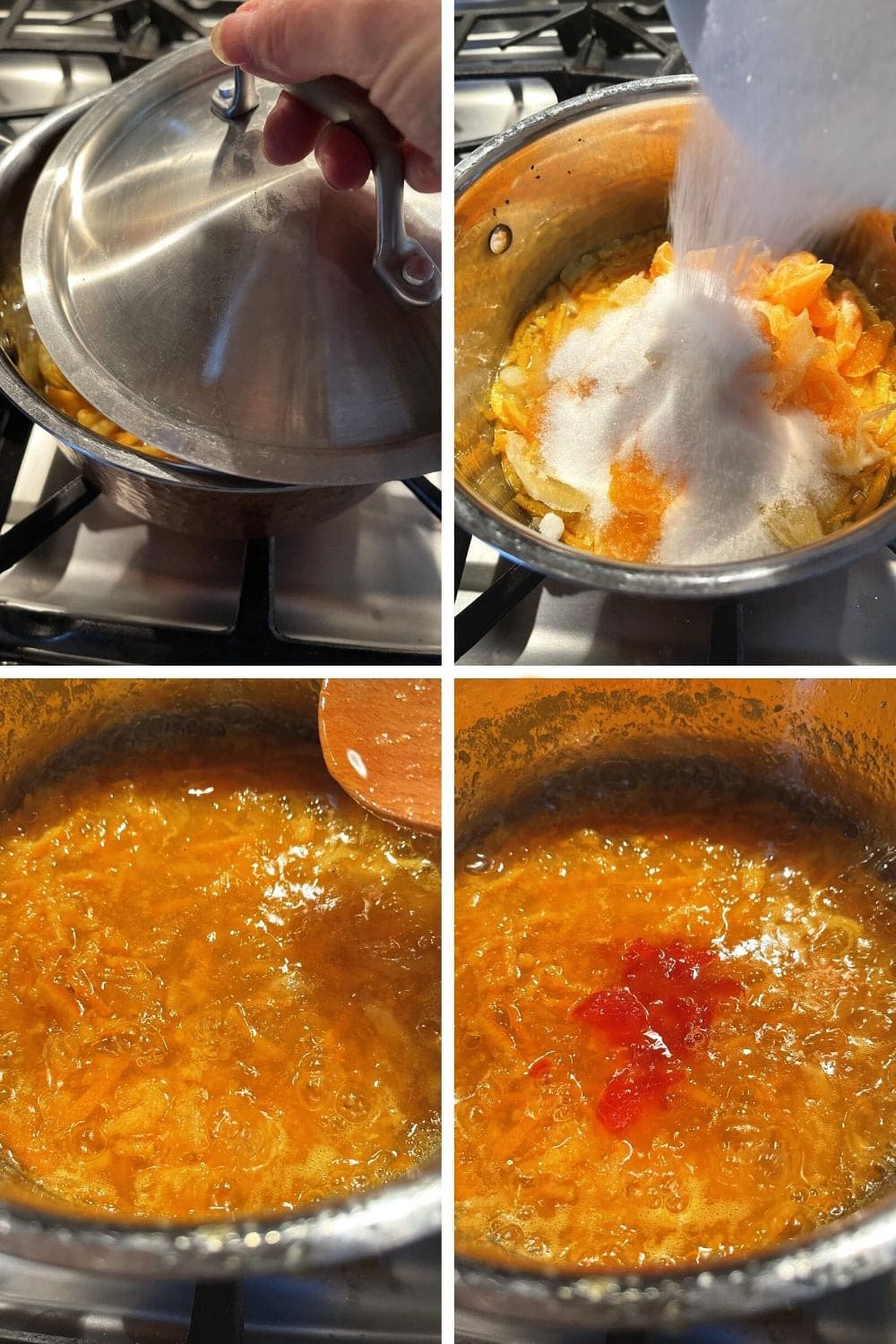 Once the peel has simmered, add the sugar and the chopped oranges and lemon. Stir and bring to a boil. Allow to boil for about 10-12 minutes, or until it tests ready (see the Recipe Card for details). If you like, stir in some cherries at the end.

Spoon into a jar and refrigerate. This recipe will make about 1 1/2 cups of marmalade.

What type of pot should I use to make the marmalade? Use a large saucepan for a single batch of this marmalade. Be sure it is a non-reactive pan (not aluminum or cast iron). A good, heavy-bottomed stainless steel pan is perfect.

How can I make it more/less chunky? To make a chunkier marmalade (a thick-cut marmalade), simply cut your peel into wider slices. For a less chunky or smoother marmalade, simply blend with the immersion blender longer, to break up the peel a bit more.

How do I know when it's done? I prefer to use the "cold plate" test for this marmalade, which is detailed in the recipe card below. You may be wondering why I don't use a thermometer here. My experience is that if you try to get this mixture to 220F, you will have a dark, thick and sticky caramelized marmalade, rather than the bright flavours of orange. I have tested this mix with a thermometer and have found it is perfectly done when the thermometer registers just 212F.

You will find the while very hot, the mixture looks somewhat runny when done. If you've used the cold-plate test though, you will have proven that that mixture will "set" when it cools. And it will. Once your marmalade has cooled and spent some time in the refrigerator, you will find it has a perfect soft set from the natural pectin in the oranges (as opposed to a jello-like set that you might get with a marmalade that uses added pectin).

What if my marmalade didn't set? Even if your marmalade doesn't set perfectly and is too runny for toast, it will still be quite useful to use for cooking or other uses, such as stirring into yogurt etc.

How long will the marmalade keep in the fridge? It should keep well in the fridge for up to 3 months, but it likely won't last that long :)

Can I freeze the marmalade Yes! Just make sure your container isn't filled completely, to allow for expansion as it freezers. Marmalade will freeze well up to a year.

Can I make a bigger batch? You can, though the beauty of this recipe is that it is so quick and easy, you can really just make marmalade "on demand", as you need it.

Can I can/preserve this marmalade for longer storage? You probably can, though I am not an expert on preserving, so I can't give advice on canning. I would refer you to a reputable source for proper canning requirements. 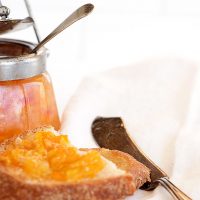 I love using mandarin orange for this recipe, as they have thin skin, little pith and wonderful orange flavour. As mandarin oranges vary in size, weighing is the best option. Start with about 10oz/300g of oranges, weighed before peeling. That said, you can use any type of orange with this marmalade. Please refer to the Ingredient Notes above the Recipe Card for more details. Whatever type of orange you start with, you will want to use 300g of orange and 200g of white sugar. The 3:2 ratio of orange to sugar will ensure a nice set to the marmalade. The lemon is added just for a little more citrus flavour and adds a bit more natural pectin to the mix. If you don't have or want to use lemon, you can just omit and use oranges only.


Meet the Author Hi! I'm Jennifer, a home-cook of some 30-plus years. I've learned a lot from getting dinner on the table all these years! I hope to share a bit of what I've learned, as well as my favourite recipes. Most importantly though, I love showing that cooking at home can be easy and enjoyable, with simple, delicious and seasonally-inspired recipes. More about me here ...