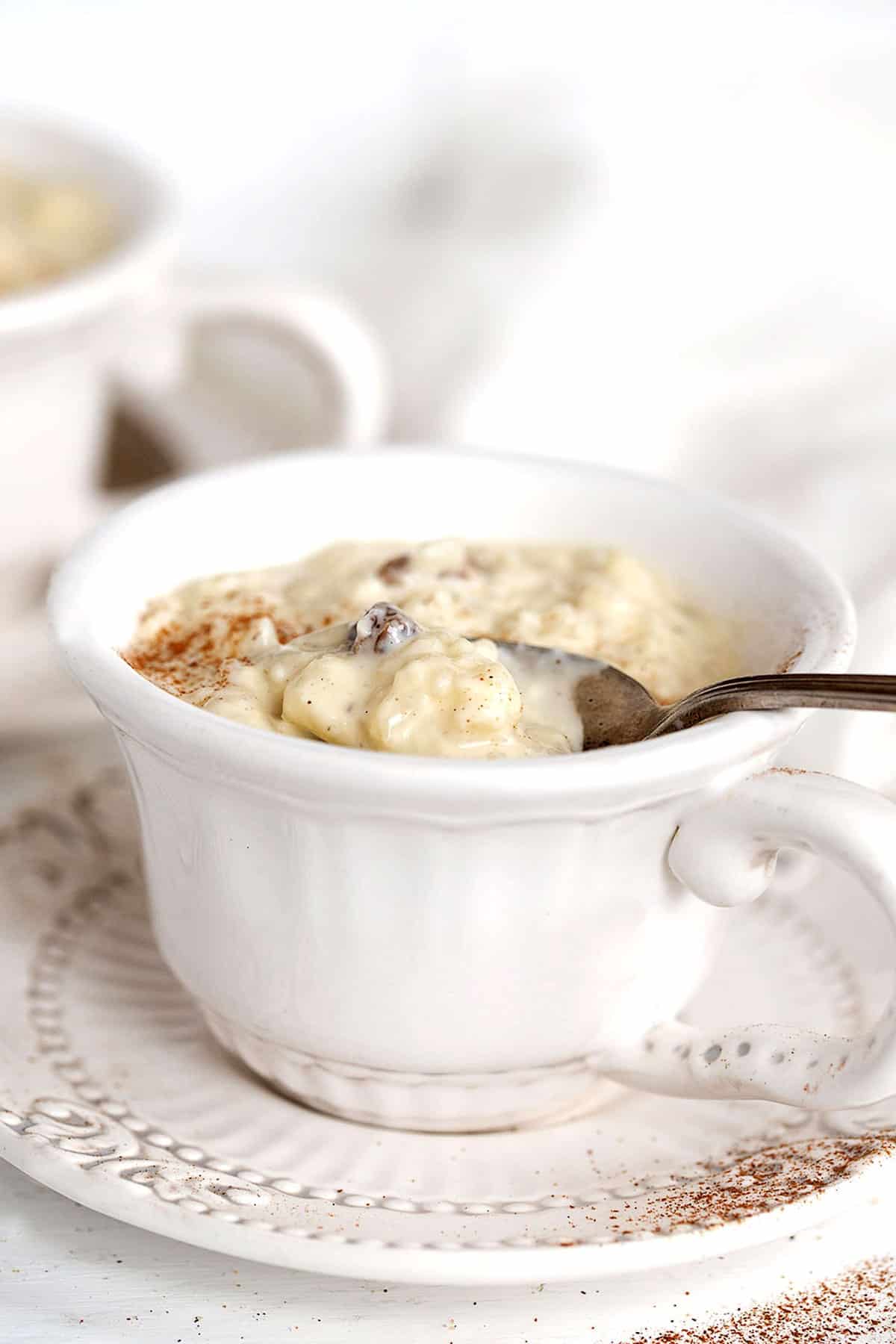 Looking for a creamy rice pudding recipe? This is my absolutely favourite rice pudding, that is, in my opinion, the best, most delicious rice pudding you can make! 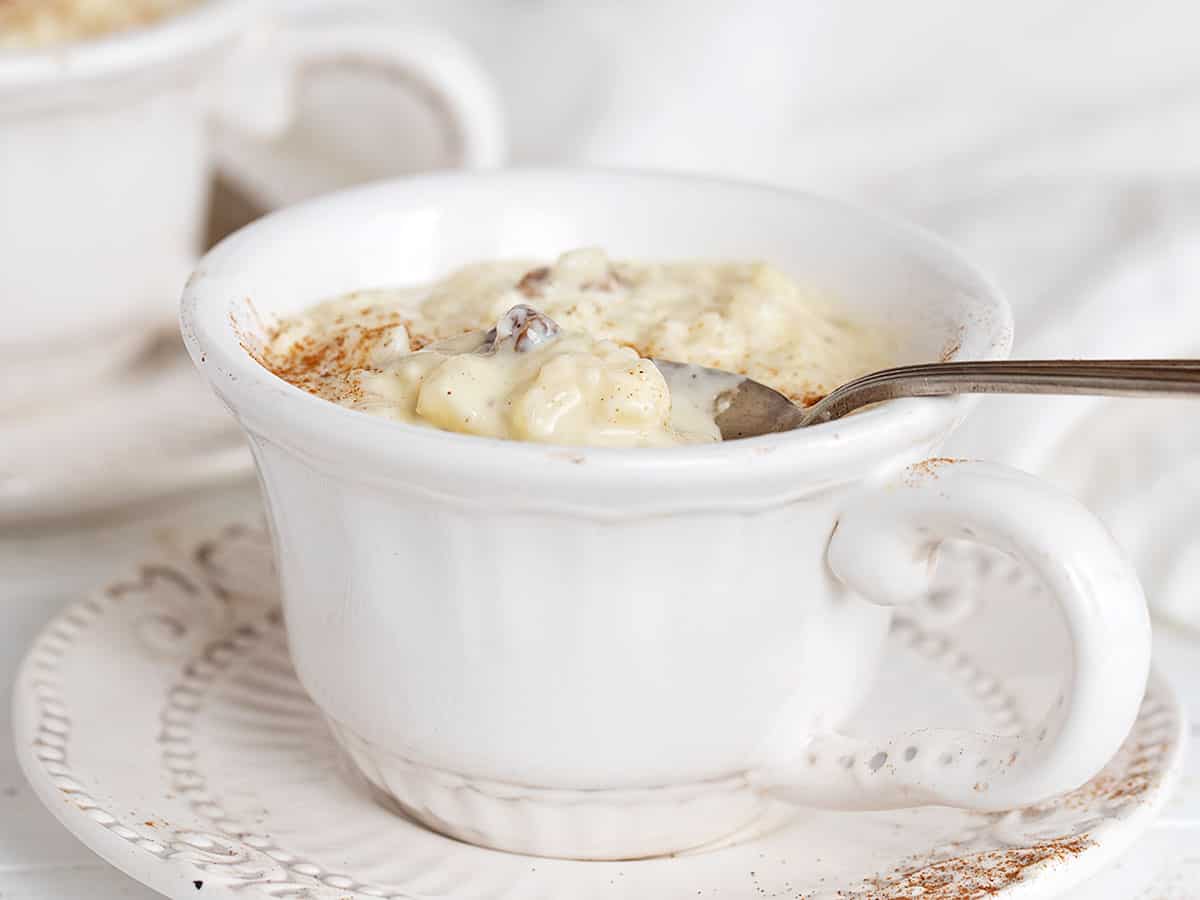 I know some people tend to think of it as quite humble food, but when done right, it's about as far from humble food as you can get.

Rice - Classic, old-fashioned rice pudding rice is typically made with converted long grain rice, such as Uncle Ben's™, and you can't go wrong with this rice. I also love Arborio rice for rice pudding. I love the plump grains of rice and it cooks up wonderfully in the milk. Basmati and Jasmine are also long grain rice, that would be an option in the absence of the first two choices. I don't recommend any other type of short-grain or quick-cooking rice for rice pudding, as it tends to result in a mushy pudding with this long-simmering recipe.

Milk - Whole, full-fat 3.5% b.f. milk is best for rice pudding. You can use 2%, if that's all you have, though the resulting pudding won't be quite as creamy. I wouldn't use milk less than 2%, for best results.

Cream - The addition of heavy whipping cream (35% b.f.) contributes both to the creamy flavour of the pudding and to the thickening process. I recommend using the heavy cream. You may be able to use a lighter cream in a pinch, such as Half & Half 10% cream, but I haven't tested it myself. I suspect it may result in a looser pudding to some extent.

White Granulated Sugar - The sugar is added simply for sweetness, so you can adjust the amount to your personal taste. I always suggest making the recipe as written first, then tweak after that. Likewise, other sweeteners will work here, but best to stick to granulated sweeteners if possible (vs liquid), to avoid thinning the pudding too much.

You will also need - eggs (2), salt, vanilla and raisins, if using.

This is a visual summary of the steps to make this rice pudding. Always refer to the Recipe Card below for complete instructions. 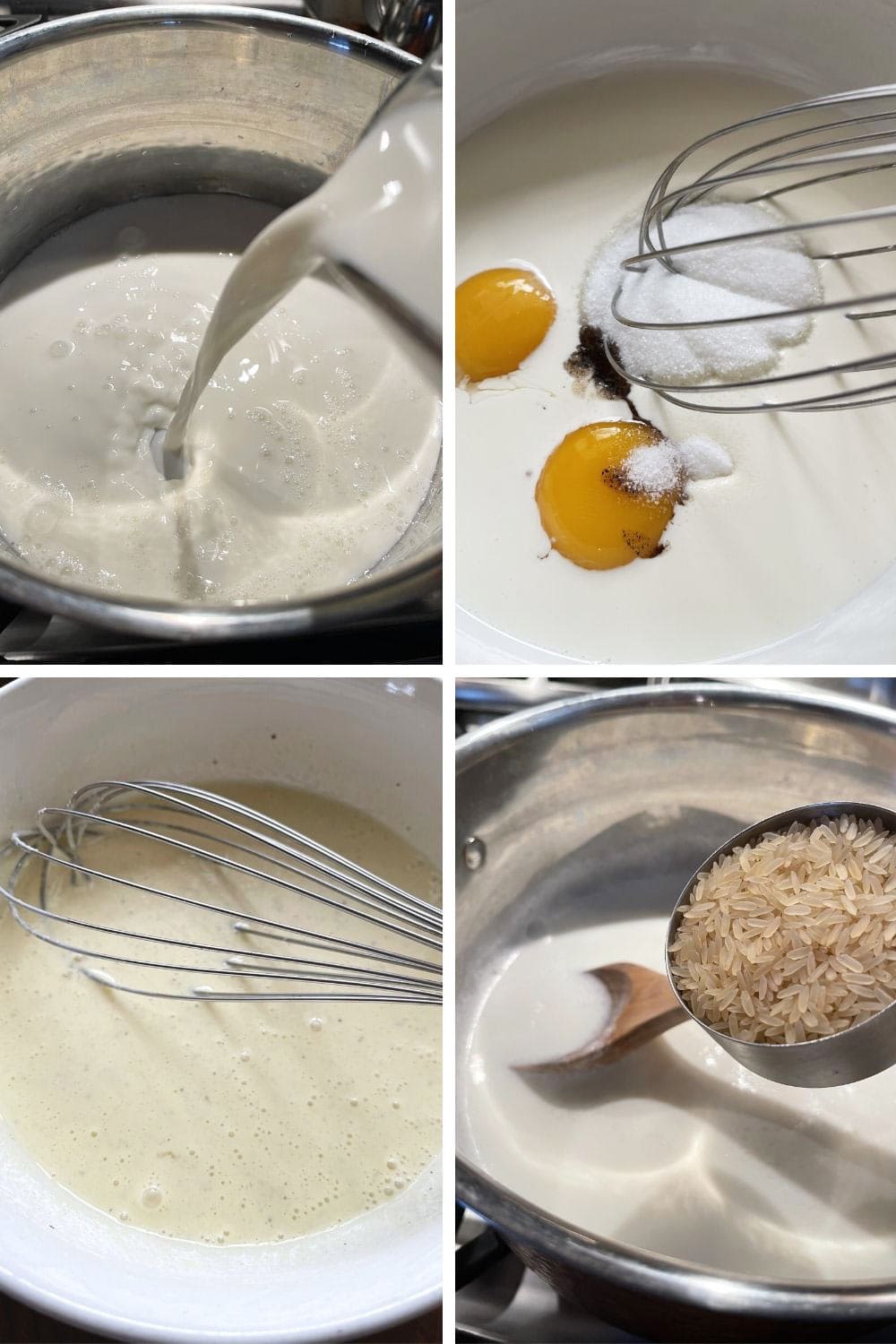 1. To start the rice pudding, you'll bring the milk to a boil in a large pot, over medium heat. Be sure to use a large pot and watch it closely. When milk hits the boil, it can boil up and over the edge of the pot, which is never a good thing.

While the milk is heating, take a moment to prepare the custard ingredients (eggs, cream, sugar, vanilla and salt). I like to do this early in the process, so it has a chance to sit out and come to room temperature before using.

When the milk comes to the boil, stir in your rice, then reduce the temperature under the pot to about medium low, or whatever setting on your stovetop that maintains a gentle simmer. 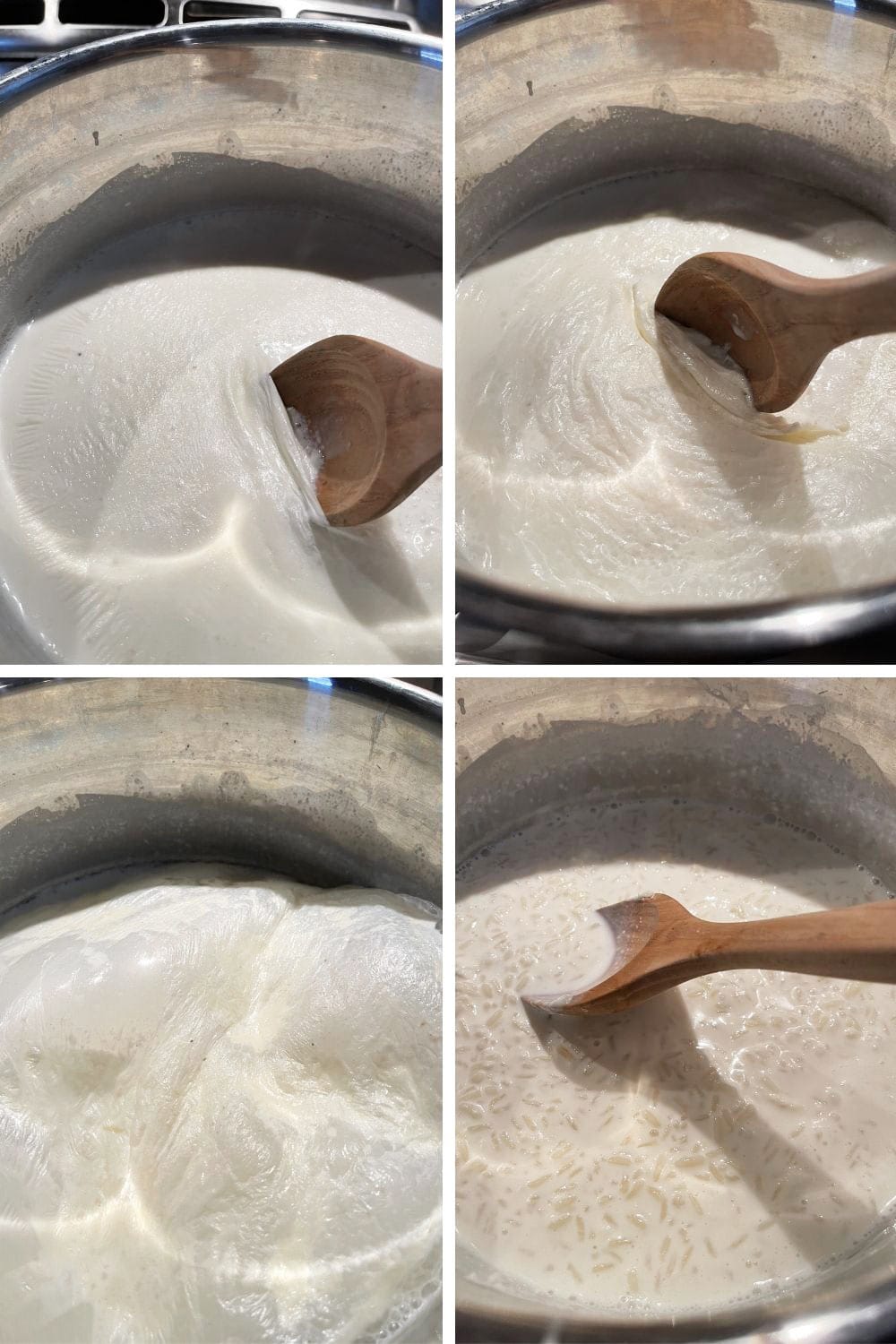 2. You'll need to stir down the pudding every 10 minutes for the first 30 minutes of cooking. The milk will form a skin on top. Just stir it back into the pudding.

After 30 minutes of cooking, you'll need to check and stir every 5 minutes, taste testing the rice with each stir until the rice is tender. At this point, much of the liquid has been absorbed, so it's important that you stir regularly and if necessary, add a bit more hot milk (or water) as needed, to the pot to avoid scorching the rice. 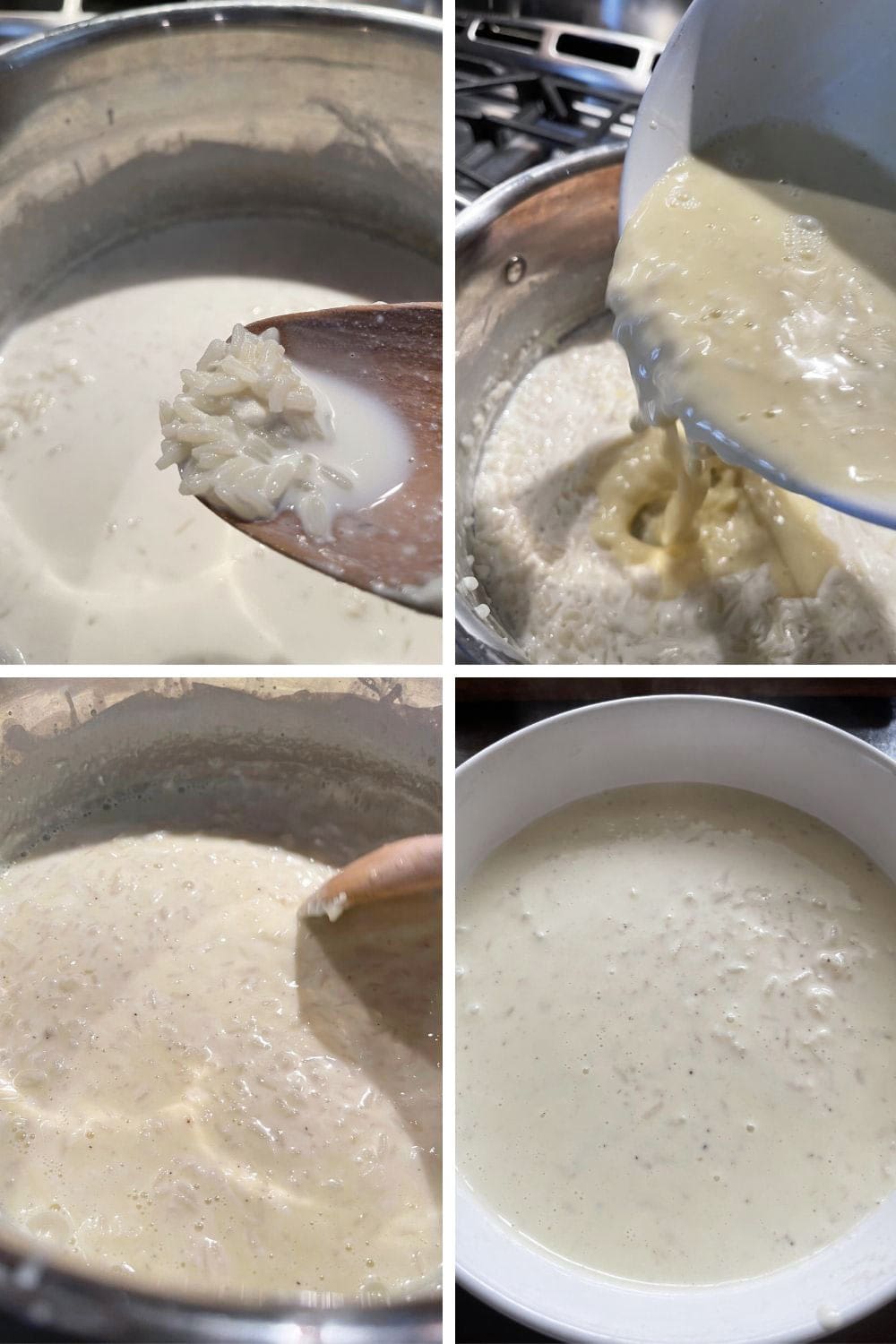 3. Once the rice is tender, slide the pot off the heat (to avoid scorching the rice) and slowly add a couple ladles off the hot rice/milk mixture to the egg mixture. You need to do this very slowly, a drop at a time, so you slowly bring the egg mixture up to the temperature of the rice mixture. If you add too much hot liquid at once, the eggs will cook an become a bit like scrambled eggs, which is definitely not what we want. Once you've added two ladles of hot rice mixture to the egg mixture. Add the egg mixture into the pot with the rice. Return the pudding to the heat over medium heat. Cook, stirring constantly, until the mixture just breaks a bubble, then remove to a bowl. Cover and refrigerate at least 6 hours. Pudding will thicken further as it refrigerates.

Can I use brown rice for this rice pudding? No. Brown rice absorbs liquid in a different way than white rice and won't perform well with this recipe that starts with uncooked rice. As mentioned above, brown rice will work in rice pudding recipes that start with cooked rice, so you may wish to seek one of those out if you want to use brown rice.

Can I use non-dairy milk for rice pudding? I think so, for the most part. I haven't tried this myself, but I believe it will be fine to replace the milk with non-dairy milk for simmering the rice. Where it gets tricky is with the heavy cream, which contributes to the thickening of the pudding. Possible a non-dairy "cream" would work similarly, as it may have thickeners in it. Alternately, you may need to resort to a bit of cornstarch/water slurry at the end of cooking that you stir into the hot pudding as needed,to thicken it a bit.

Can I omit the eggs in rice pudding? No, not in this recipe. The eggs are responsible for the thickening of the pudding, as we are essentially make a custard here at the end.

Why is my rice pudding too thick or thin? This rice pudding will thicken as it refrigerates. If it's a touch too thick for your liking, simply stir in a tablespoon or two of heavy cream and stir to loosen.

If your rice pudding has ended up too thin, it is likely that it didn't cook it long enough at the end to thicken the custard. If it needs rescuing, pour it into a saucepan, heat, then stir in a bit of cornstarch mixed with cold water, a bit at a time, until the pudding thickens as needed. Re-refrigerate.

How long will rice pudding keep in the fridge? Rice pudding will keep nicely in the fridge for 3-4 days. If it becomes too thick, simply stir in a tablespoon or two of heavy cream to loosen.

Can you freeze rice pudding? Yes, you can. Rice pudding will keep well frozen for up to 3 months. Thaw in the refrigerator. 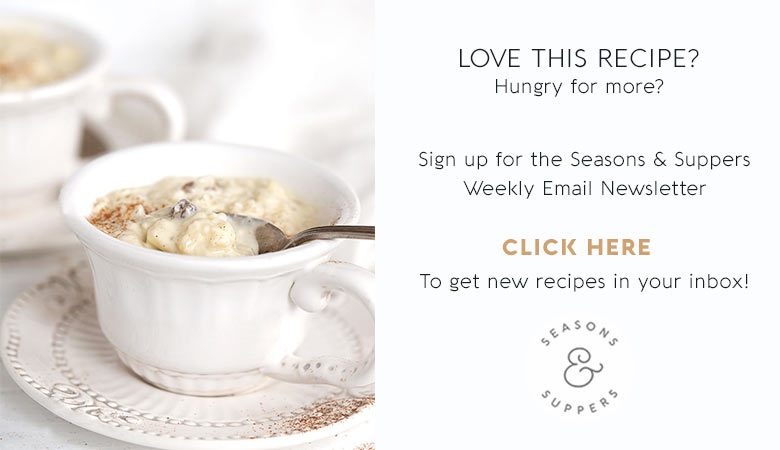 There are a few places where this recipe can go wrong, so I thought I'd point them out, since I've done all of them at one point or another :)

2) Simmering the milk/rice mixture too vigorously and not stirring it down regularly. Either can result in rice scorching on the bottom of the pan or the mixture drying out before the rice has a chance to cook. Keep mixture at a gentle, just-barely simmer and stir it down regularly. I like to set the timer on my stove in 10/5-minute increments, to remind me, so I can't forget about it cooking on the stove.

5) Letting the liquid in the pot get too low. As rice absorbs liquid differently, you may find that the milk mostly disappears before your rice is cooked. If the mixture gets too dry, it may scorch on the bottom of the pan. Don't hesitate to add more milk or water to the pot towards the end of cooking, to make sure the liquid is sufficient to suspend the rice off the bottom. For best results add hot milk or hot water, to prevent cooling down the mixture. 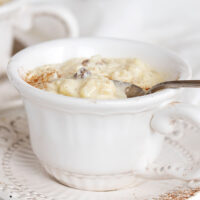 Use long grain converted white rice for a classic, old-fashioned rice pudding. Arborio rice also makes lovely rice pudding, though it tends to absorb a bit more liquid, so expect that you will need to add a bit more hot milk or water towards the end of simmering. Jasmine and Basmati are other long grain rice options, if you like. I don't recommend a short-grain or quick-cooking rice here. Be sure to read the Ingredient Notes, FAQ and Cook's Notes above the recipe card for more tips and substitution suggestions for making this recipe. You will also find Step-by-Step Photos to see the process of this pudding being made.