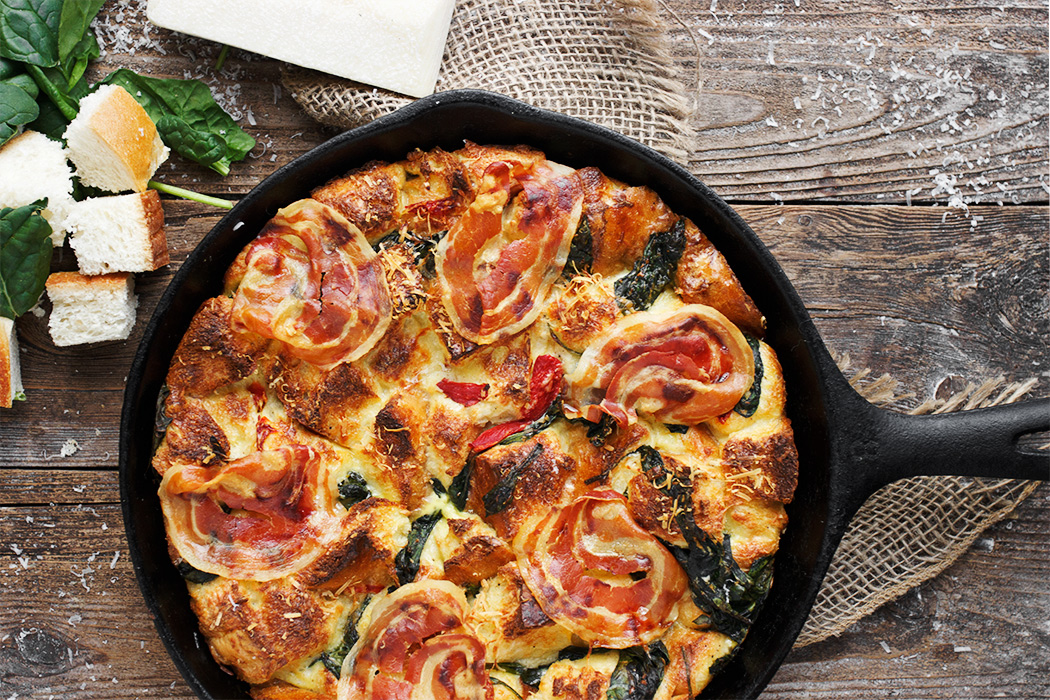 Perfect for leisurely weekend breakfast or a weeknight meal, this savoury Parmesan Pancetta Bread Pudding is flavoured with lots of Parmesan cheese, loaded with spinach, roasted red peppers and topped with crispy pancetta.

This savoury bread pudding is definitely what I want to wake up to on a lazy, winter weekend. It has a ton of flavour, comes together easily and is the perfect way to use up bread that's a wee bit stale. And if you're a "breakfast-for-dinner" lover, needless to say, this would be a great weeknight meal, too.

In addition to lots of spinach, I added some jarred roasted red peppers, both for colour and flavour. Lots of Parmesan flavours the egg/milk mixture and of course, there's that crispy pancetta on top.

While this bread pudding does take some time in the oven, it comes together quickly into one large bowl, where everything is tossed together before being poured into an oven-proof skillet or baking dish. You'll have time to enjoy that 2nd cup of coffee while it cooks! Savoury bread puddings are endlessly customizable, depending on what's in your fridge. Replace the spinach with kale or arugula. Replace the roasted red peppers with sun-dried tomatoes or top with prosciutto, regular bacon or nothing, if you'd like it meatless. Finally, any cheese you like or have would be great in this dish.

Look for pancetta rounds in with the sliced deli meats. Many deli counters also have whole pancetta that they can slice for you, as well.

If your bread pudding is done and your pancetta isn't quite crispy enough, pop it under the broiler for a few minutes to finish.

If you find yourself with some stale bread anytime, simply cube it up and freeze it. Then you'll be ready to whip up a savory bread pudding anytime! (Thaw in the freezer bag on the counter over-night before using).

Like a little heat with your breakfast? Add a splash of Sriracha to the egg mixture!