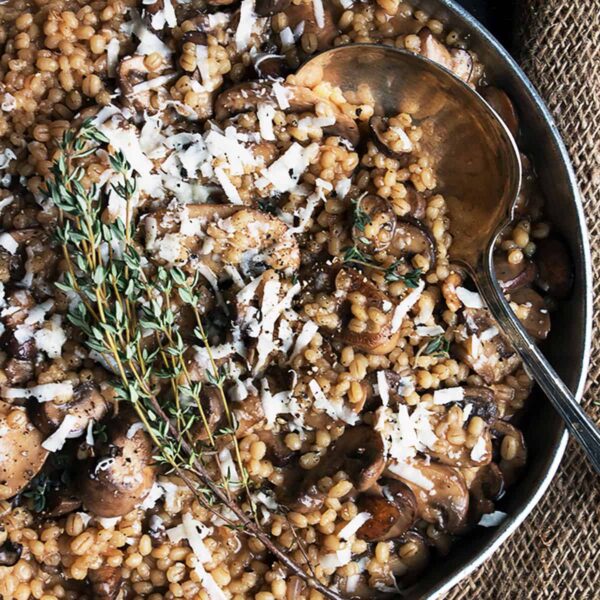 Delicious and filling, this is barley cooked risotto style, with lots of mushrooms and Parmesan cheese. A great meatless main or a delicious side dish.
Jump to Recipe Pin Recipe
5 stars from 16 ratings

This barley risotto features fabulously nutty pearl barley, cooked up risotto style with mushrooms, garlic and Parmesan. A great meatless main or a hearty side. 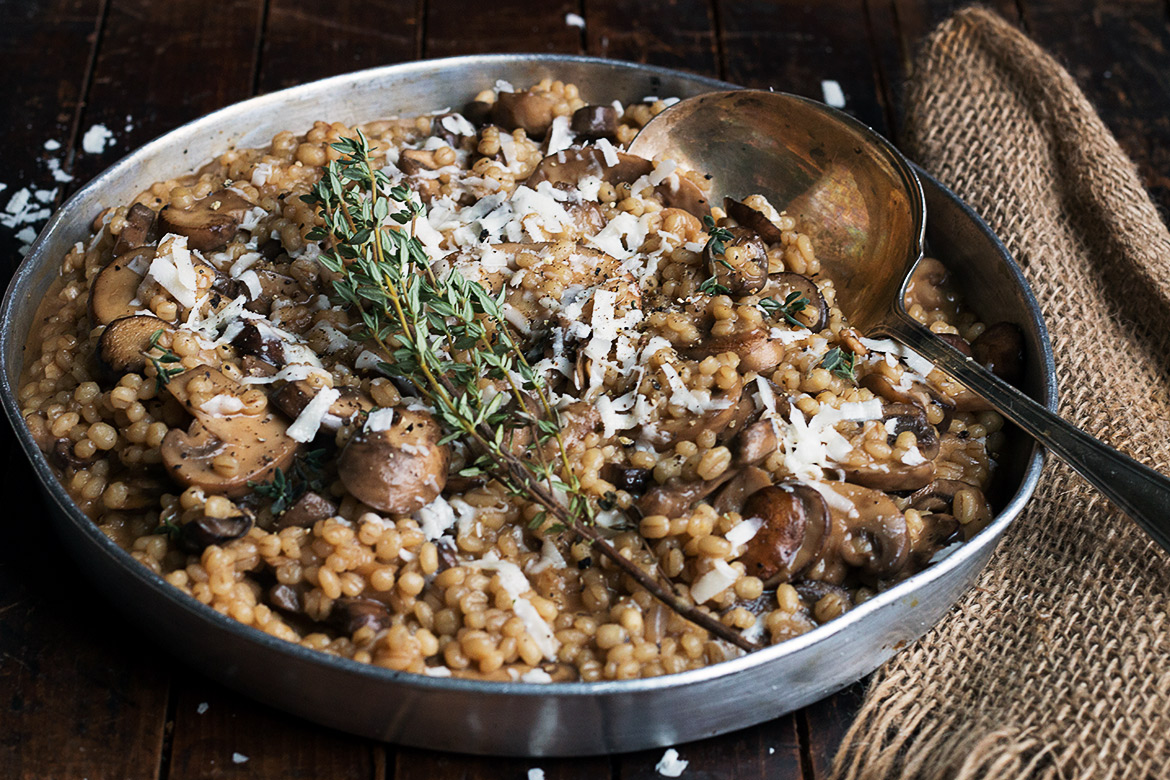 I am a huge fan of barley for comfort food and it’s a bonus that it’s a particularly healthy choice, full of fibre and great fuel for all the shovelling in my future. Whether it’s in a soup or a salad, or cooked up risotto style, barley is always a great choice.

This dish cooks up the barley risotto-style, with rich beef broth, garlic and mushrooms and a touch of Parmesan. It’s full of flavour and nutty, chewy deliciousness.

Enjoy this as a meatless main, or cook up a batch and enjoy as a side dish with a simple protein. It’s hearty, nutty and delicious, with the goodness of whole grains.

If you’ve shopped for barley, you no doubt found two kinds on the shelf – pot barley and pearl barley. Not sure what the difference is? Read on …

What’s the difference between pot barley and pearl barley?

All barley is husked after harvest, by running through a husking machine. Pot barley (or sometimes called hulled barley) is lightly husked, removing only the inedible outer layer and leaving the bran and germ layer in intact. As such, pot barley is the whole grain version, with the most possible nutrients. Due to the outer layer though, pot barley requires more time to cook. Pot barley is best suited for soups or stews, that will cook for a longer time.

Pearl barley is left for a longer time in the husking machine, to remove the outer bran and germ layers, revealing the inner white or “pearl” coloured barley. Despite the removal of the outer layers, pearl barley is still a nutritious option and a great, high-fibre choice. Without the outer layer, pearl barley takes less time to cook, so it’s perfect for dishes that will cook for a shorter time. 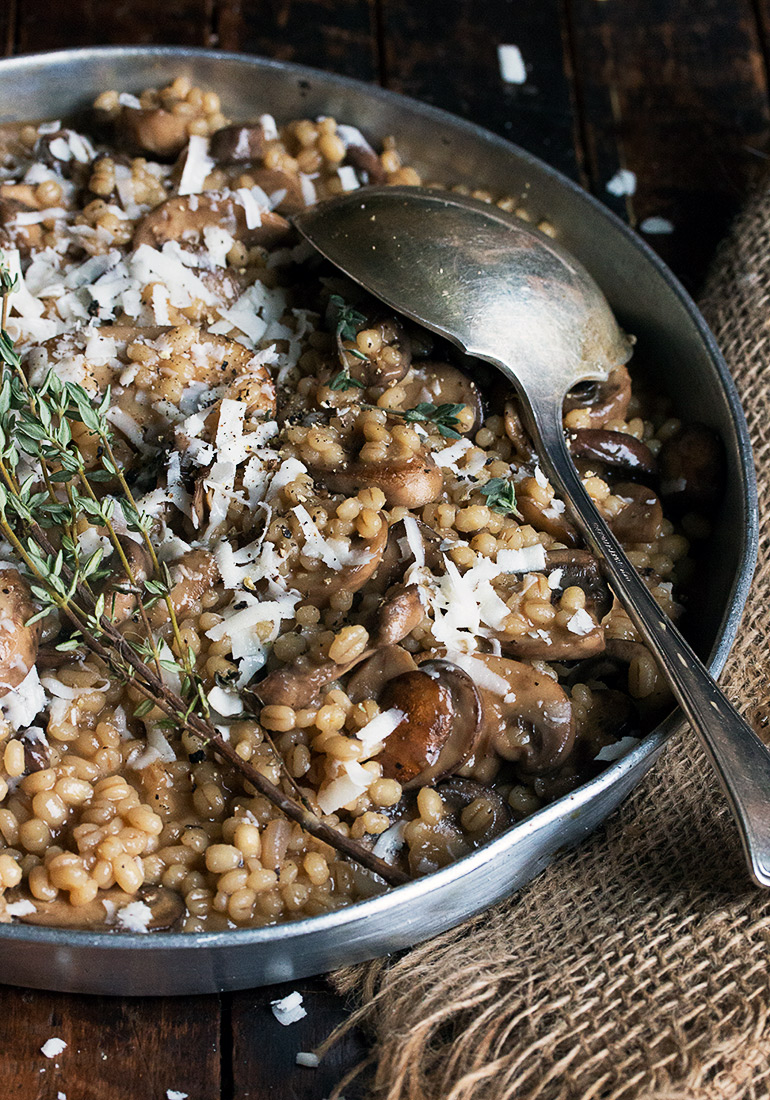 I have made this dish several ways, working with what I’ve had on hand, so I can tell you definitively that it’s worth picking up beef broth, rather than using chicken broth. The depth and flavour of beef broth perfectly complements the nutty barley and the mushrooms in a way that chicken broth can’t compete with. That said, if you would like to make this one vegetarian, simply substitute a nice vegetable broth and maybe consider adding a splash of balsamic vinegar for some flavour depth.

While it is possible to make this dish with pot barley, it won’t cook in the specified time or with the specified amount of broth. You will need to cook longer and keep adding broth until tender, probably another 15 minutes and several cups more of broth.

While this one is cooked risotto-style, you don’t have to hover over it as you would with a rice risotto. Just keep an eye on it, stir a bit and add more broth when the pan gets dry. Otherwise, it will just simmer away on the stove-top.

I love to use a mix of mushrooms, even if it’s just combining button mushrooms and cremini mushrooms. The variety is nice.

I prefer to start with a low or no sodium beef broth and add salt to the dish myself as I cook it. I find it much easier to control the saltiness of the finished dish that way. 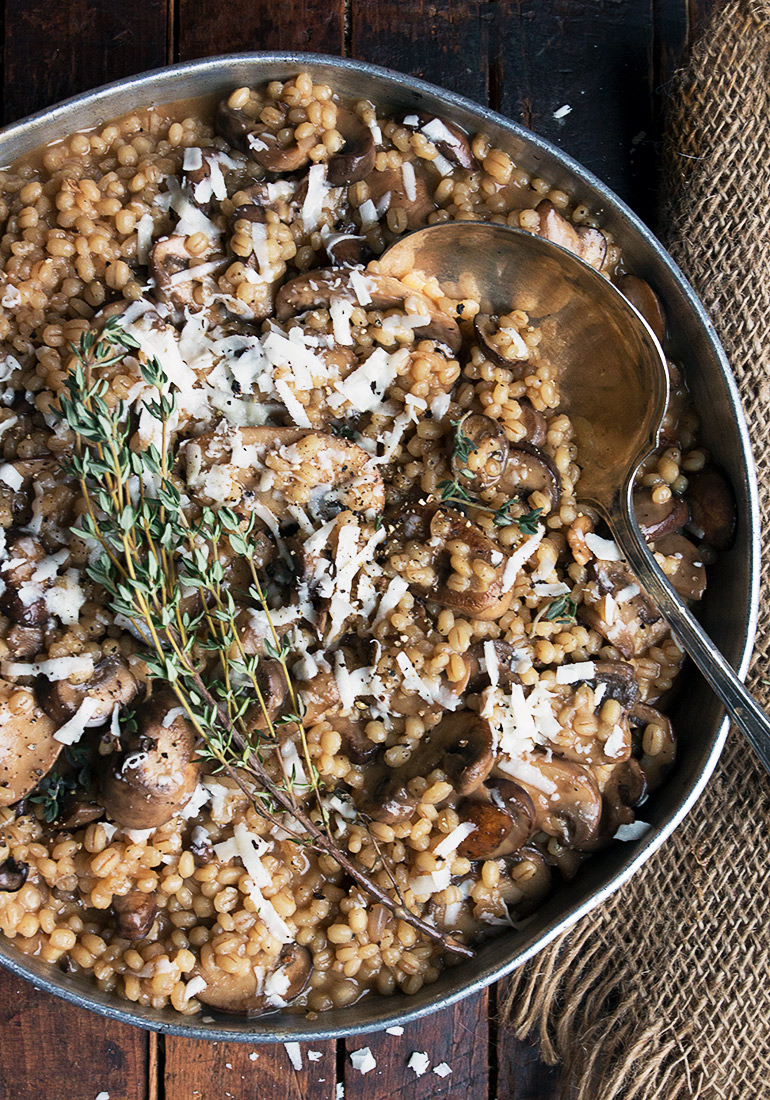 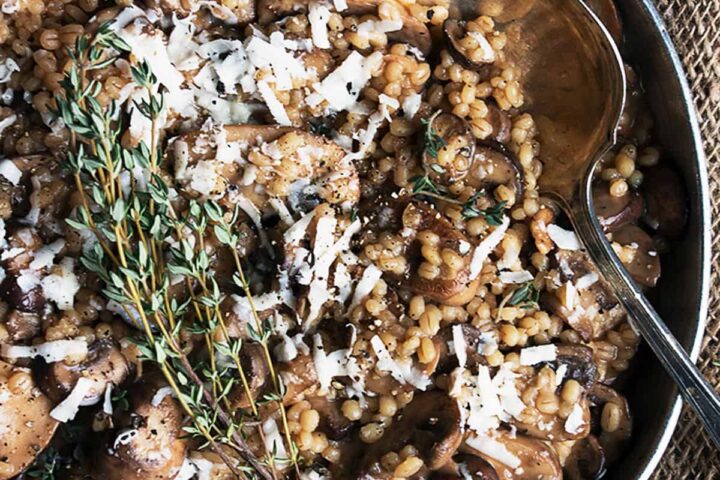 Get the Recipe: Barley Risotto with Mushrooms

68 comments on “Barley Risotto with Mushrooms”