An easy and delicious Portuguese caldo verde soup. My version uses watercress for the greens, carrots and spicy chorizo sausage.

Caldo Verde is a classic Portuguese soup, also known as Portuguese Greens Soup. My version veers a little more toward a rustic version of the classic soup. I'm pretty sure it had something to do with the dreary weather out the window at the time.

For my soup, I didn't add a lot of stock, I didn't puree it all the way and I stirred lots of chorizo chunks in to the soup, instead of just using a bit for garnish. And I used a bit less of the greens and let them wilt in the soup. It ended up being the perfect soup for a cool and rainy day. The beauty of this soup though is that it's delicious either way. I've included instructions in the recipe below for both versions. I think the biggest contributor to the fabulous flavour of this soup is that the chorizo is boiled with the vegetables, so it imparts its flavour as the soup cooks. This is especially nice if you're a spice lover and you start with a hot chorizo. You'll end up with a soup that will warm you up on the coldest day!

What makes this soup Caldo Verde "ISH", is the use of watercress, instead of the more traditional collard greens or kale. I don't know about you, but I haven't had much experience with using watercress in recipes. I wasn't even sure if I'd ever seen it in my grocery store. Lo and behold though, there it was, neatly tucked in with the leafy greens. I have to say though, the watercress was lovely in this soup - delicate in both flavour and texture and honestly, a nice change from the tougher greens.

I wasn't able to find the Portuguese chourico sausage, so I went with a hot, cured Spanish Chorizo. I loved the extra spiciness, but if you're not a spice lover, look for regular chorizo. Just be sure to get the dry cured variety, which is usually found in the deli section. 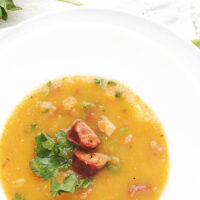 Leave a review, ask a question or add a comment Cancel reply