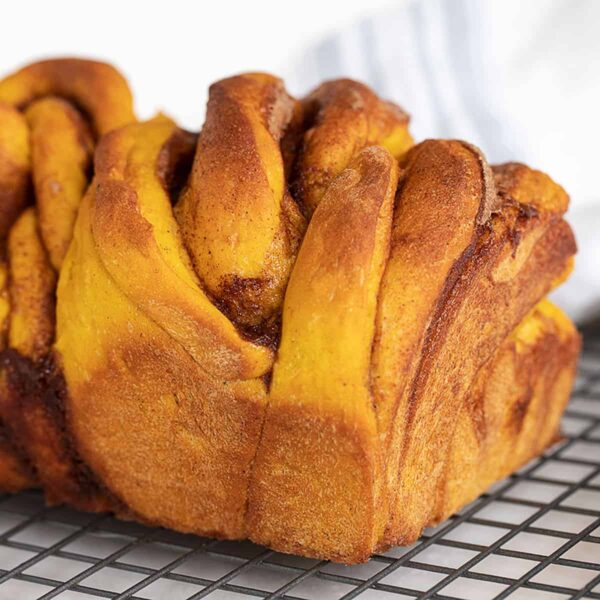 Enjoy the fabulous Fall flavour of pumpkin and cinnamon in this delicious pumpkin yeast bread, with a pretty cinnamon sugar swirl.
Jump to Recipe
5 stars from 2 ratings

Enjoy the fabulous Fall flavour of pumpkin and cinnamon in this delicious pumpkin yeast bread, with a pretty cinnamon sugar swirl.

Why you’ll love this bread

This pumpkin yeast bread just shouts Fall, with the combination of pumpkin flavour and warming cinnamon. It’s also a wonderfully moist bread, pretty as a picture and the perfect way to use up ends of cans of pumpkin.

This pumpkin bread is lovely plain with butter, toasted with butter, or try it for sandwiches, French Toast or Bread Pudding.

Here are the simple ingredients you will need for this bread …

Pumpkin Puree – I always seem to say this, but you’ll want to use Pure Pumpkin Puree and not pumpkin pie filling. That said, I feel like this bread would also work with an equal amount of sweet potato or butternut squash puree, if you happen to have left-overs. You will need 3/4 cup of puree.

Yeast – you will need either Active Dry Yeast or regular Instant Yeast (such as SAF Brand). Quick or Rapid Rise yeast is not recommended for this classic two-rise bread.

Step 1: Make the Dough and First Rise – Start by making the dough, mixing in flour only until you have a moist dough that cleans the bowl and wraps around the dough hook.

You may not need all of the flour specified to get to that point. For yeast bread recipes, always treat the flour amount as “approximate”. It may look a little sticky, but you can always add a bit more flour once you turn it out onto the work surface.

Once you lightly knead, form into a ball and set it to rise until doubled. This bread is a fast riser, so don’t wander far. I like to use my large measuring cups to rise my dough, as it is easy to see when the dough has doubled.

When it comes to rising dough, allow it to rise just until doubled and no longer. The exact time will vary from kitchen to kitchen. Trust what you see and don’t be dictated by the clock.

Step 2: Shape the dough – After the dough has risen, turn out onto a lightly floured work surface and roll into a roughly 10×16 rectangle. Brush with egg wash and sprinkle the cinnamon sugar mixture evenly over-top.

Roll the rectangle up, starting from the long side, then pinch the seam together. Flip it over so the seam side is down.

Using a sharp knife, cut down the centre of the log from end to end.

Step 3: Twisting and 2nd Rise – Shaping this twisted dough is quite easy, but it easier to see it done than to explain it, so be sure to have a look through the photos below so you have an understanding of the process.

After you cut the log down the centre from end to end, rotate the two pieces slightly, so that the cut side is facing straight up. Pinch together the far end of the two pieces the twist the two pieces together 3-4 times, pinching the end closest to you once it is twisted.

Once the dough is twisted together, lay it next to your loaf pan and if it is longer than the pan, use our palms to press both ends towards the centre, shortening it up until it is roughly the length of the pan, then lift it into the pan.

Cover the loaf pan with plastic wrap and set to rise until about doubled. The last picture shows my dough after it has risen and is ready for the oven.

This bread will keep well for several days, kept at room temperature and stored in an airtight container .

This bread will also freeze well. Wrap well and freeze up to 3 months. 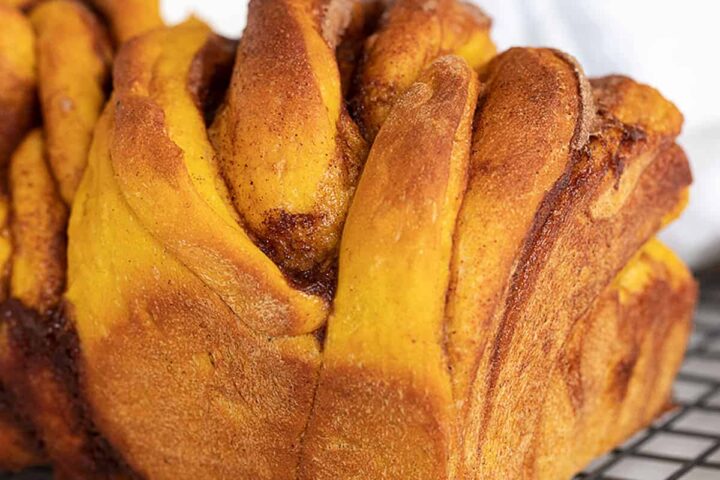