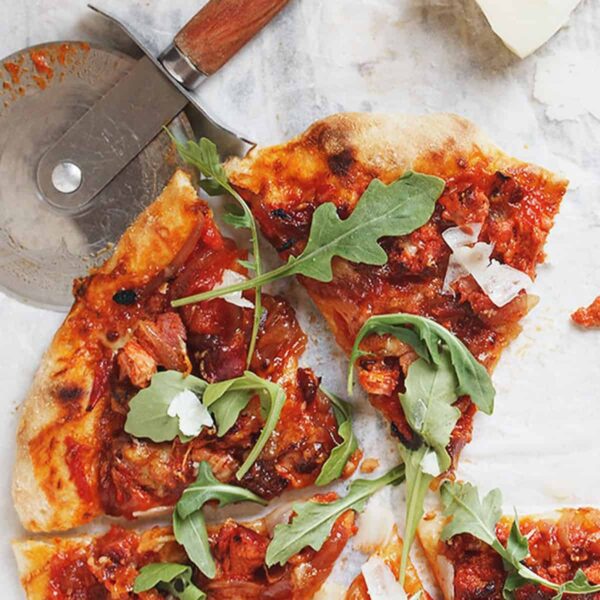 If you can't find Manchego cheese, Pecorino Romano would be a good substitute. If using fresh chorizo sausage, remove from casing, crumble and cook in a frying pan before adding to pizza. Will make two 12-inch pizzas or Four 8-inch pizzas.
Jump to Recipe Pin Recipe
5 stars from 1 rating

This Chorizo and Manchego Pizza is pizza with a Spanish twist, with manchego cheese, red onion and arugula. 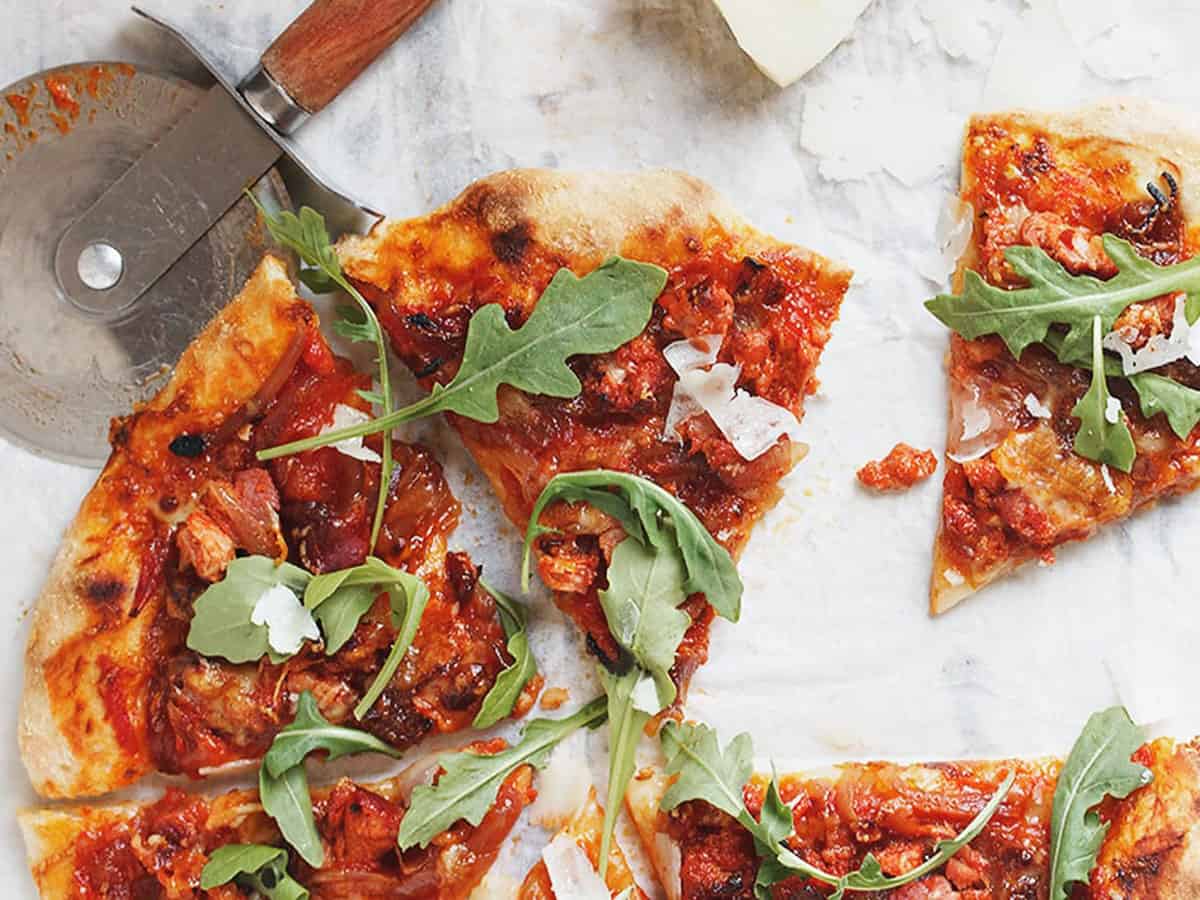 Homemade pizza night at my house has a new star! This Chorizo Manchego pizza was one of several different pizzas that we baked up this week and it was the clear winner. The flavours in this one were truly memorable and will definitely be one that we will make again and again.

The chorizo pizza was a new one to try this week. I had gone to the grocery store intending to pick up fresh chorizo sausage with the plan of crumbling and cooking it before putting it on the pizza. As fate would have it, I couldn’t find any fresh chorizo anywhere that day, so I picked up some cured chorizo instead. As it turned out, it was probably a much better choice for this pizza. It cooked up beautifully and was so full of paprika flavour and smokiness, that I don’t think fresh chorizo can come close to.

Along with the chorizo, is the nutty flavour of Spanish Manchego cheese. I think it’s fairly easy to find these days, but a reasonable substitute would be a Pecorino Romano. Finally, the pizza is dotted with caramelized red onions. I’m not going to lie. Caramelizing onions is not a quick undertaking, but so worth it. If you’re not in the mood or short on time, just throw them in to a hot skillet with a little oil and fry them off. You probably don’t want to put them on the pizza raw, as they don’t really cook enough to develop any sweetness.

After the pizza comes out of the oven, a bit of fresh, baby arugula tops it off, for a bit of green and more Manchego shavings.

I like to make my own pizza dough and sauce, simply because I like it better than any pre-made variety that’s easily found around here. You can easily use a pre-made pizza sauce and/or pizza dough. Our homemade pizza always starts with Jim Lahey’s no-knead pizza dough, that I mix up the night before and leave on the counter until dinner time the next day. The dough is divided into 4 pieces, which makes 4 small personal pizzas for us. As we all tend to have different tastes and crust-thickness preferences, it works well. 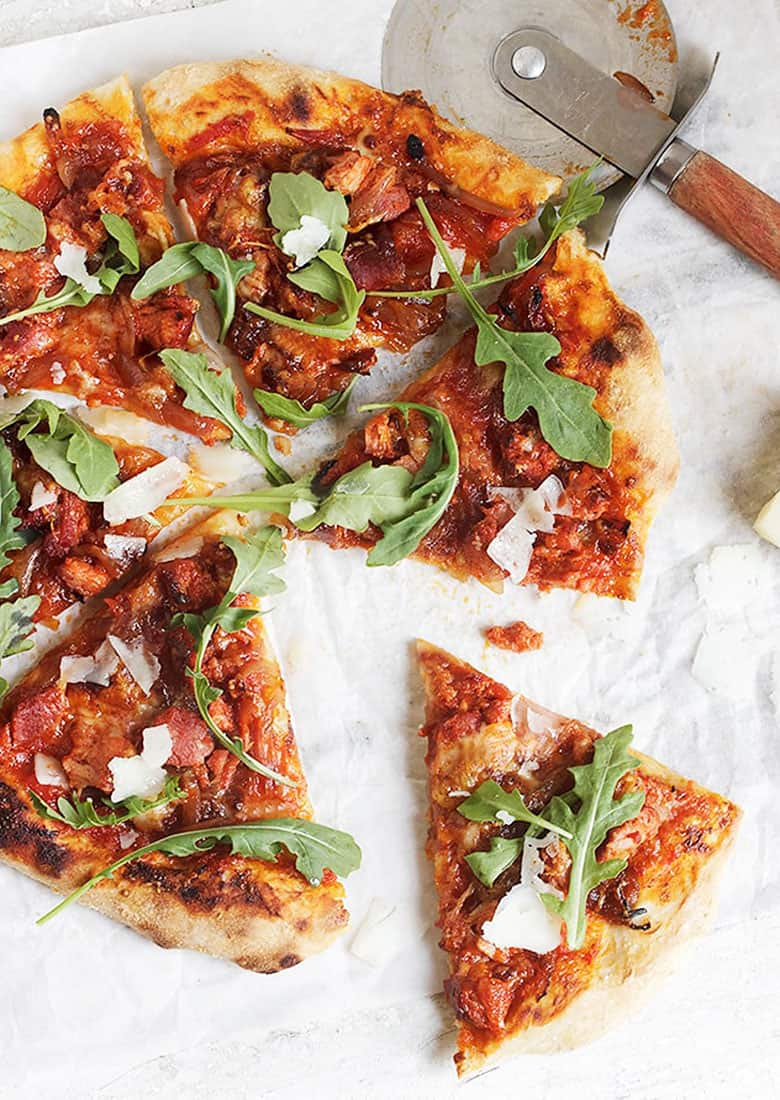 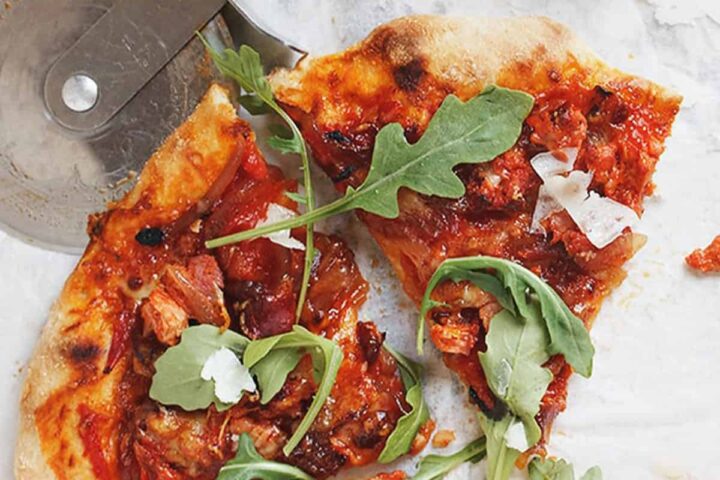 Get the Recipe: Chorizo Manchego Pizza

Pizza Dough (via Jim Lahey) OR use store-bought:

Pizza Sauce (or use store-bought):

« Previous PostChicken with Mustard
Next Post » Peaches and Cream Cake