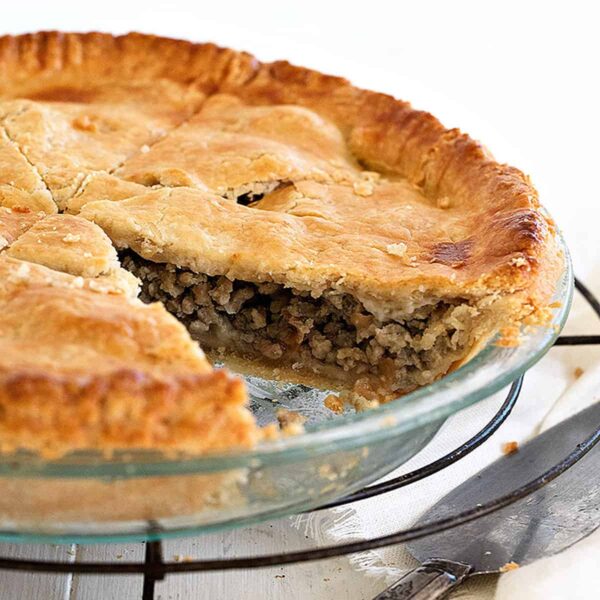 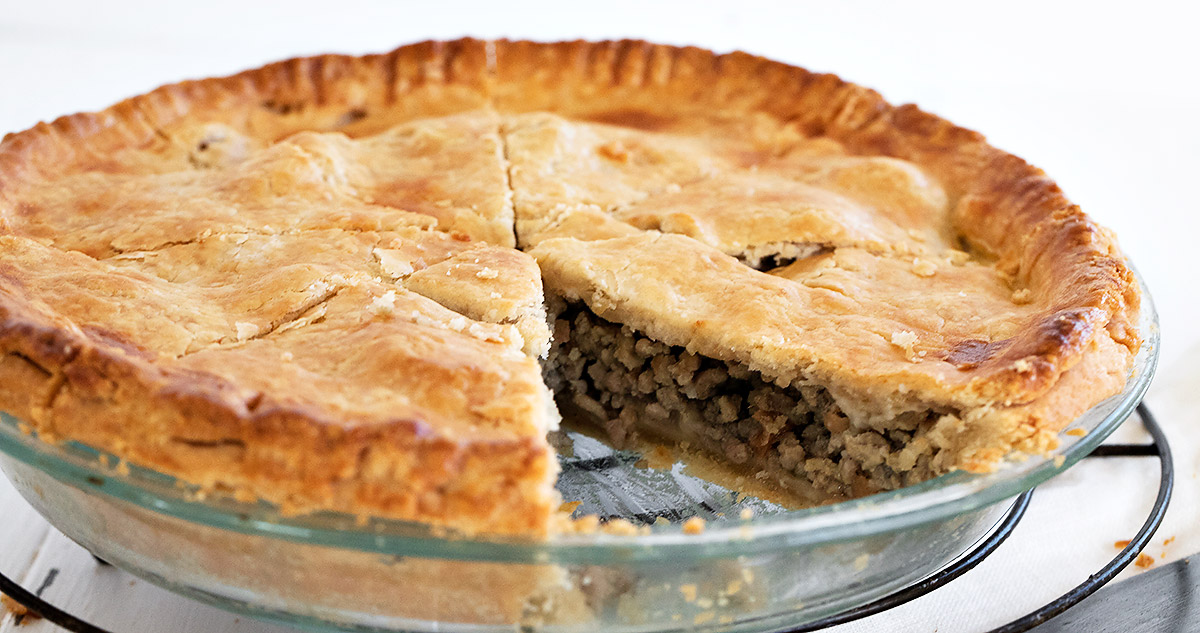 Tourtière is a classic French-Canadian meat pie often served at Christmas. For me, it’s a perfect Christmas eve meal. This is my Mom’s recipe and it’s one of my favourite versions. It’s made with ground pork, is lightly spiced and beautifully moist.

Not sure how to pronounce it? Some suggest “tor-tee-air“, but I more often hear it pronounced with just two syllables, such as “tor-tyair” or “tour-tyair“.

What makes a great Tourtière, in my opinion, is a flaky, lard-based pastry, so I’ve included an easy recipe here, as well. I feel like I can call it easy as I am pastry-challenged and even I managed to make it. All that said, it’s a busy time of year and if you’d prefer to go the store-bought pastry route, I’m certainly not going to judge :)

Tourtière is a classic French-Canadian meat pie, traditionally served at Christmas, though makes a great meal any time of year.

I love that Tourtière can be made ahead and frozen, then baked off as needed. It’s a real time-saver and a great thing to have in your freezer during the busiest days of the holidays. It would also make a great, homemade gift!

Ground Pork: I prefer an all pork pie, but you can use a mix of pork and beef or basically any combination of meats, as long as they are ground.

Savory: First, as a Canadian, I’m having a hard time typing the name of this herb without a “u” in it :) And yes, savory is an herb, not a spice mix and no, it doesn’t have a “u” in it. This is not a spice you see in many recipes anymore, so you may not have it on hand. If you’ve not needed it until now, you may not want to add a whole bottle to your spice rack. You can omit, if you like (it’s only 1/8 of a tsp) or a pinch of marjoram would be a decent substitute. If you do have it on hand, you may have ground savory or something labelled Summer Savory, which is generally more coarse leaves. The 1/8 tsp measurement is almost surely meant to be ground savory, so if you only have the more coarse version, use a bit more.

Bread Crusts: This is simply fresh bread crumbs really, but using the crusts so it’s not mushy. The crust off any fresh bread is fine here. I wouldn’t recommend dry bread crumbs, as they won’t behave the same way in the filling. You can “crumble” in a food processor, if you prefer. 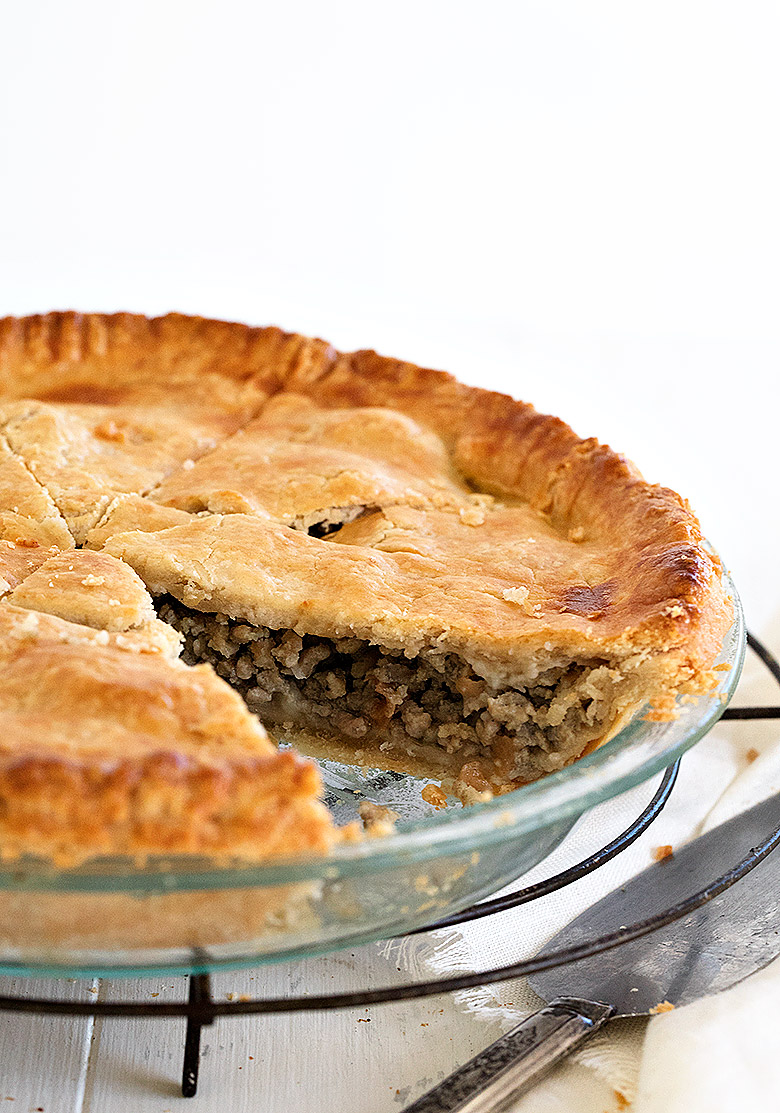 The pastry recipe here is pretty much the “back of the box”, Tenderflake lard pastry recipe. The only problem is that the full recipe makes enough for three 2-crust pies. Doing this recipe for 3 pies seemed a little excessive, so I’ve cut it down to two. So you will have excess pastry here. It’s just not easy to scale the pastry recipe down and it calls for 1 egg and 1/3 of an egg is tricky business, especially when it comes to pastry. Certainly if you’d like 3 pies, simply scale the filling recipe up to make enough filling for 3 pies.

Cloves are a common addition to Tourtière, but I’m not fond of them in this pie myself. If you are a clove lover, you can certainly add a pinch to the mix. Other warm spices such as cinnamon and allspice are also sometimes found in Tourtière, if you feel you’d like that addition.

As mentioned above, you can use all ground pork (my favourite version) or use a mixture of ground meats, such as beef, pork and or veal.

Be sure your pork mixture is cooled before adding to your pastry. I like to make the filling early in the day and refrigerate, then assemble the pies later in the day, to bake fresh for dinner.

Top Tip: For the flakiest lard pastry, keep your pastry cold. Work quickly when assembling if you can and if you feel it’s warmed up too much, you can pop the assembled pie in the freezer for 5-10 minutes before popping in the oven.

To serve your Tourtière, you can offer an assortment of condiments such as ketchup or chili sauce. I love mustard, whether regular, honey mustard or grainy mustard. I find it balances the richness of the pie really nicely. Some suggest pickles or something like pickled beets or quick pickled vegetables, for the same reason. I don’t think you need to fuss with a side dish for a Tourtière. I usually go just with a salad of some sort.

How to Freeze Your Tourtière

For best results, freeze your Tourtière after assembling and before baking. When ready to enjoy, cook from frozen, brushing the top with the egg wash before putting it in the oven. Baking time will be a longer from frozen.

Cooked tourtière may be frozen for 4 months or so. There is no need for it to be thawed before reheating. To reheat, cover your frozen Tourtière loosely with foil and place in a 350F oven. Bake until a knife inserted in the centre is hot when you test it. 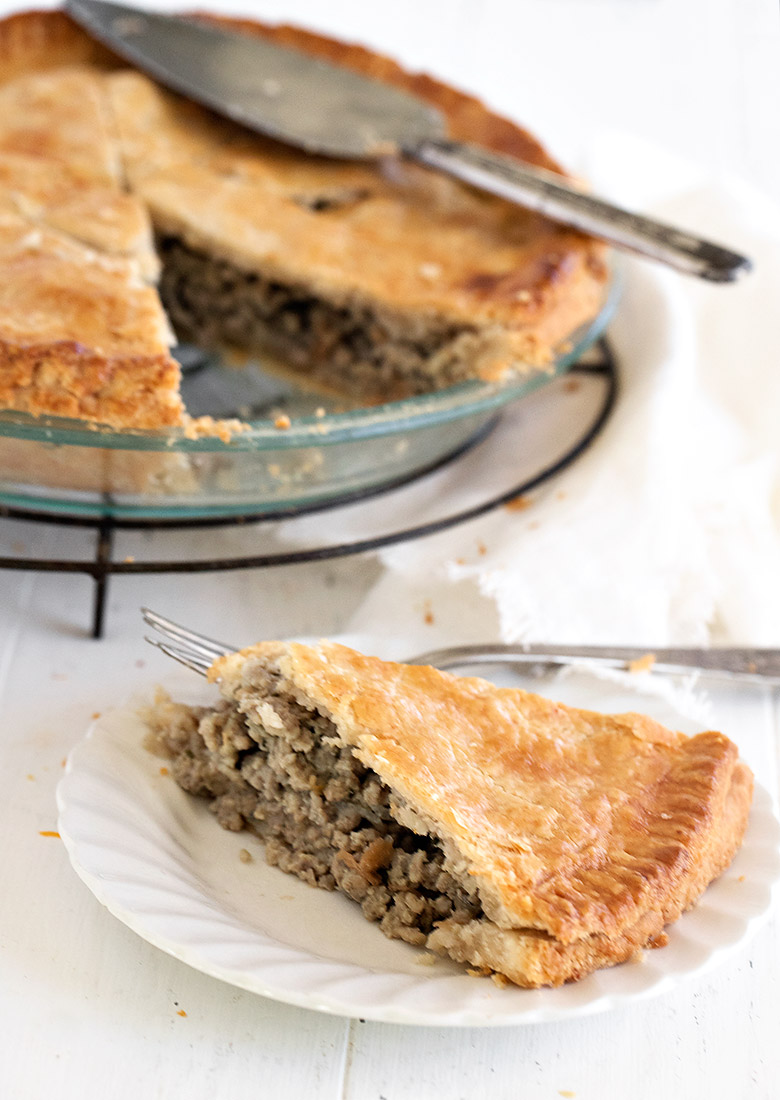 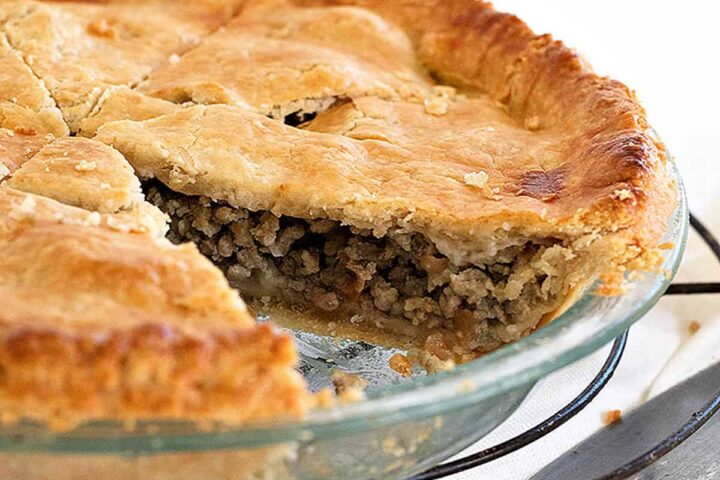 Get the Recipe: Classic Tourtière

For brushing before baking:

The pastry recipe will make enough pastry for three 2-crust pies. As the filling here is based on two pies, you will not need all of the pastry. You can refrigerate or freeze the extra for another time or purpose. Cloves are a common addition to Tourtière, but I’m not fond of them in this pie myself. If you are a clove lover, you can certainly add a pinch to the mix. As mentioned above, you can use all ground pork (my favourite version) or use a mixture of ground meats, such as beef, pork and or veal. Be sure to read the Ingredient and Cook's Notes above the recipe card for more tips, tricks and substitution suggestions for this recipe.
Cuisine: Canadian
Course: Main Course
Author: Jennifer
Calories: 450kcal, Carbohydrates: 26g, Protein: 14g, Fat: 32g, Saturated Fat: 9g, Cholesterol: 67mg, Sodium: 515mg, Potassium: 217mg, Fiber: 1g, Sugar: 3g, Vitamin A: 48IU, Vitamin C: 1mg, Calcium: 20mg, Iron: 1mg
Tried this recipe?Mention @seasonsandsuppers on Instagram or tag #seasonsandsuppers.
Main Course Recipes Pork Dinner Recipes