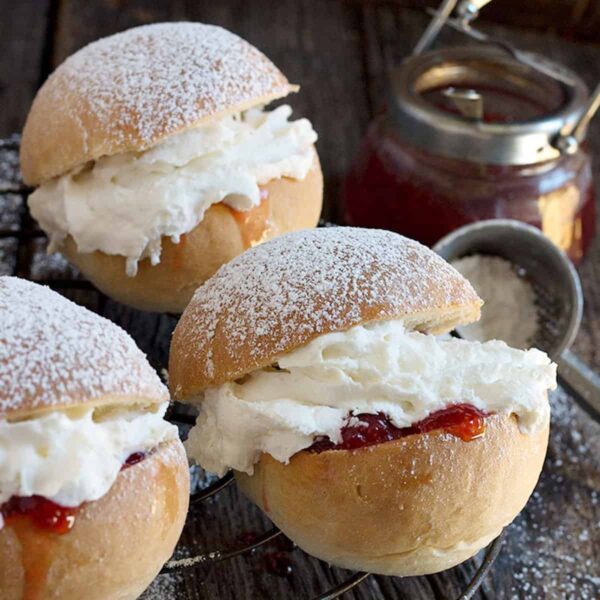 A classic British tea-time treat, these yeast buns are sliced and filled with jam and whipped cream.
Jump to Recipe
5 stars from 5 ratings

A classic British treat, these Cornish Splits are a lovely yeast bun, filled with jam and whipped cream. Perfect for a special dessert. 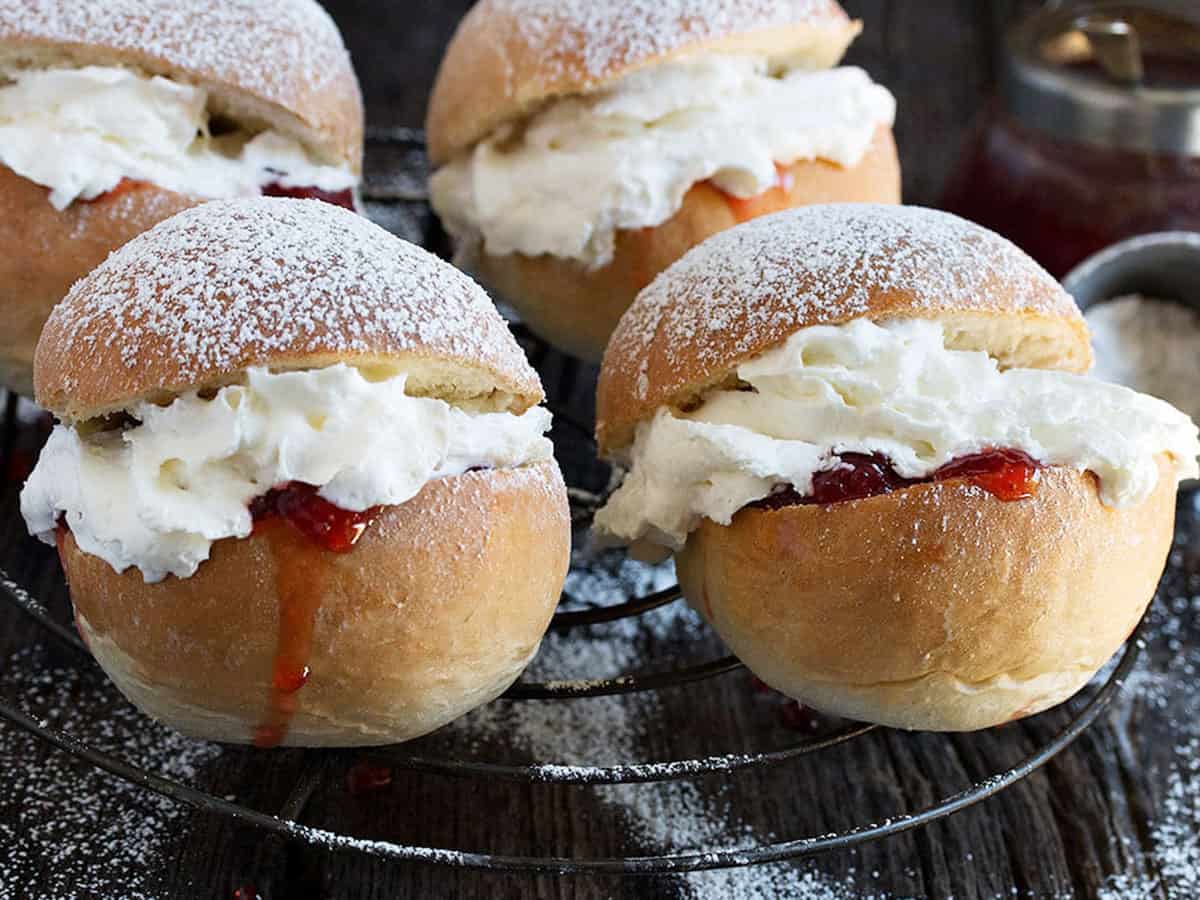 I only discovered Cornish Splits a short while ago and wondered how it was that this delicious little treat had escaped my notice until now. Cornish Splits are a classic British “cream tea” treat, that has somewhat fallen out of favour over the years, in favour of the scone. I suspect that has a lot to do with the ease of making scones vs a yeast bun and the longer shelf life of a scone vs a split.

Having now made and enjoyed these little buns, I think it’s high time the Cornish Split made a come back!

You can use any jam you like for this one, so it’s a perfect use for your fresh Summer fruit jams! Try them with a variety of jams throughout the year.

This recipe will make 8 nice-sized buns. You could make them slightly smaller and get 10 from the dough.

The traditional cutting technique for Cornish Splits involves cutting on an angle from about 1/3 down the front angling down to about 2/3 down towards the back (almost, but not all the way through).

Traditionally, Cornish splits are served warm, but I found them just as nice at room temperature. That said, they don’t stay fresh a terribly long time, so are best eaten on the day they are baked. They freeze beautifully though, so don’t hesitate to freeze any extras for later.

As mentioned, you can use any jam you like, but a slightly runny jam works nicely here, as it soaks into the bun a bit. I used my Strawberry Platter Jam.

As for the whipped cream, I just used canned, real whipped cream here (being a bit lazy, yes :). You can certainly use cream that you whip yourself, either spooning it on or stabilizing a bit and piping it in. Or as noted above, substitute clotted cream.

Don’t skimp on the filling. These are best a little over-stuffed and drippy :)

Take your bun, spread with clotted cream then drizzle with Lyle’s Golden Syrup and you’ve made yourself a “Thunder and Lightning”. 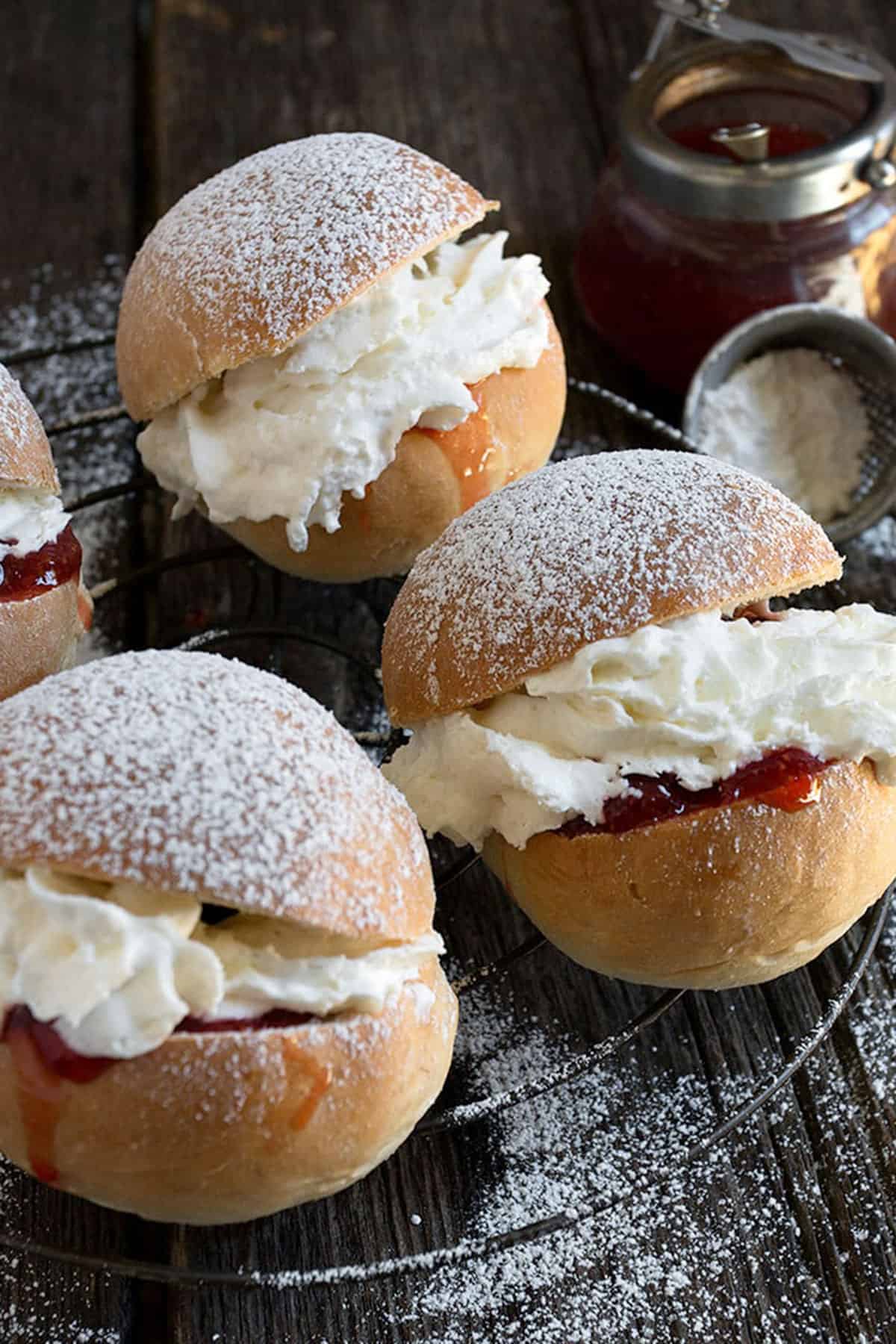 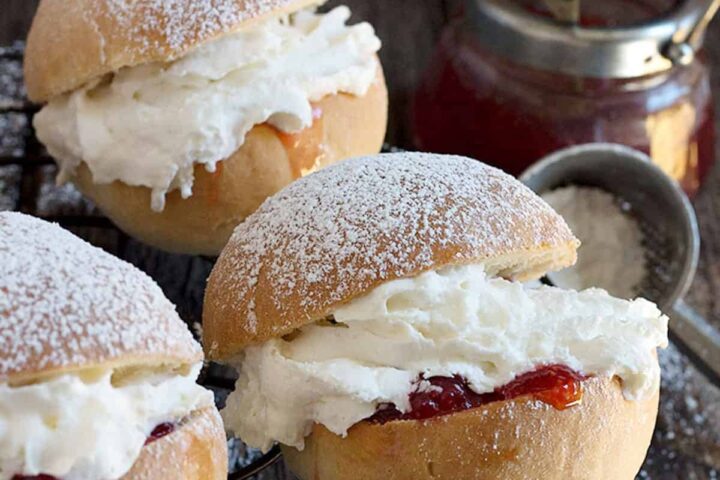