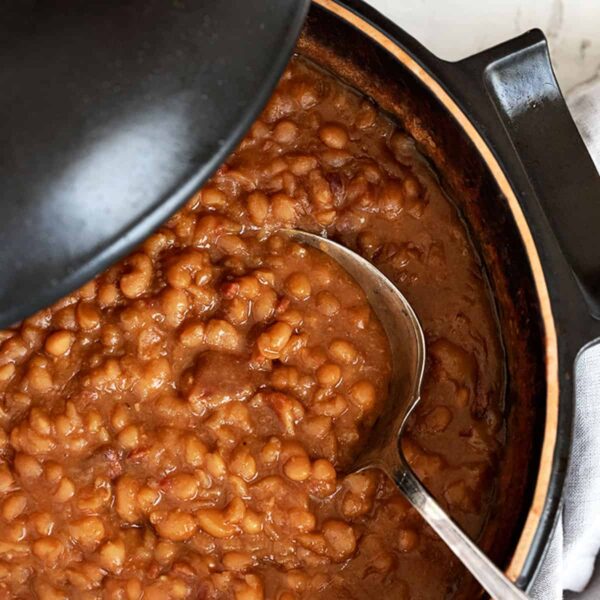 Low and slow cooked maple baked beans, made from dried beans, real maple syrup, bacon and a touch of molasses.

These baked beans have a touch of sweetness from the maple syrup, a touch of salty from the bacon and some richness from a bit of molasses. These have a lovely balance of flavours.

Maple baked beans make a perfect side dish for an Easter dinner, as it pairs beautifully with ham. They are also great for summer BBQs!

Dried Navy Beans – also known as pea beans, these are easily found in the dried bean section of most grocery stores. I always buy a fresh bag of beans for baked beans.

Maple Syrup – there really isn’t a substitute for real maple syrup, so if you really want to enjoy maple baked beans at their best, spring for the real thing. You will need one cup of maple syrup. Grade B or Amber syrup has the richest maple flavour, but Grade A is fine, too.

Bacon – adds a great salty note to the baked beans and is recommended unless you want a vegetarian dish, in which case you can omit the bacon and increase the added salt accordingly.

Molasses – I recommend “Fancy” molasses, for the nicest flavour. Cooking molasses will work in a pinch, but Blackstrap molasses is probably too strong a flavour.

How to avoid mushy baked beans

Beans get mushy when the skin of the bean is cracked or crushed, allowing moisture to get inside the bean, so here are ways to avoid that …

Making ahead, storing, freezing and re-heating

Making ahead – These baked beans can be made ahead, refrigerated and served reheated later in the day or the next day.

Cooked baked beans can be refrigerated for 2-3 days.

Storing – Store cooked baked beans in the refrigerator. For longer storage, they can also be frozen, but only after they have been baked.

Freezing – Cooked baked beans can be frozen up to 3 months and maybe longer.

Reheating – Refrigerated or frozen baked beans can be reheated in the oven. For refrigerated beans remove from the refrigerator a bit ahead to take the chill off, then place COVERED (with lid or foil) into a 350F oven, until warmed through (about 20-25 minutes). If beans seem thick, add a splash of water and use a fork to gently distribute it through the beans to loosen. Avoid vigorous stirring, which could crush the beans and make them mushy.

Frozen baked beans can be re-heated in the oven from frozen. Allow 35-40 minutes of oven time to reheat. Once the beans are starting to heat and are no longer frozen, you can add a splash of water to the beans, if necessary, to thin them out a bit. If beans seem watery at all after freezing and reheating, simply leave in the oven uncovered for a few minutes and the excess liquid will cook off.

You can also reheat cooked baked beans in the microwave or even in a saucepan on the stove-top.

Do I need to use real maple syrup?

Can I make these baked beans ahead and reheat?

Yes! Properly made baked beans can be made ahead and re-heated nicely. See the “Making ahead” section below for more details.

Can I make these baked beans in the slow cooker or Instant Pot?

If you are looking to free up oven space, consider doing the baked beans ahead. They keep well in the fridge and re-heat nicely. Also, as these beans bake at 325F, you can bake them alongside a ham, for example, that can cook at the same temperature.

Not in my part of the world :) Classic “baked” beans are made with navy beans.

Can I use canned navy beans instead of dried?

This recipe is specifically written for starting with dried beans. As canned beans are pre-cooked, the long oven cooking time of this recipe would be too long for canned beans. You can certainly experiment with the same ingredients and a shorter cooking time, but I can’t offer much advice as I haven’t tried it myself.

My baked beans are not tender. What did I do wrong?

Most often, it happens because the beans weren’t simmered long enough at the start of the process. The beans need to be simmered until tender before going into the oven, as they will not soften much in the oven, even with the long baking time. Be sure to taste taste the beans to be sure.

It could also happen if you used old, dried beans or if you have extremely hard water.

I like a darker baked beans. Can I add more molasses?

Yes! It’s really a matter of personal taste. Experiment by adding a bit more to start, maybe an extra Tablespoon or so and going from there. You’ll want to try to keep a nice balance and avoid over-powering the maple flavour with the stronger flavoured molasses.

Maple baked beans are sweeter than regular baked beans, but the added bacon, creates a lovely sweet/salty balance. If the finished beans taste a touch too sweet for your taste, stir in a bit more salt, at the end or alternately, add a little less maple syrup at the end.

What should I serve with maple baked beans?

Maple baked beans are a perfect side dish for ham, especially for Easter. Baked beans of any sort are always at home for a BBQ, alongside hamburgers, ribs or sausage. Finally, I love to use leftover baked beans warmed and spooned over toast for a quick and easy lunch or dinner.

Can I add a splash of bourbon to the maple beans?

Sure! Add a bit with the maple/molasses mixture at the start of cooking. Don’t get too heavy-handed though, as you’ll still want a nice balance of flavours. Start with just a splash. Always remember that flavours concentrate through long cooking.

When simmering the soaked beans, how do I know when they are “tender”?

Note that the beans won’t be as “soft” as finished baked beans at this point. That magic happens in the oven. You just need them to be tender after the simmering, and that generally happens after 45-55 minutes or simmering. 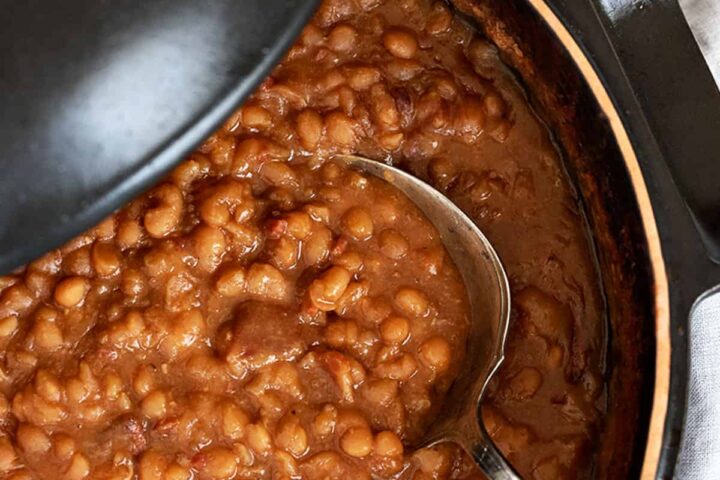 Get the Recipe: Maple Baked Beans

To be added near the end of cooking: