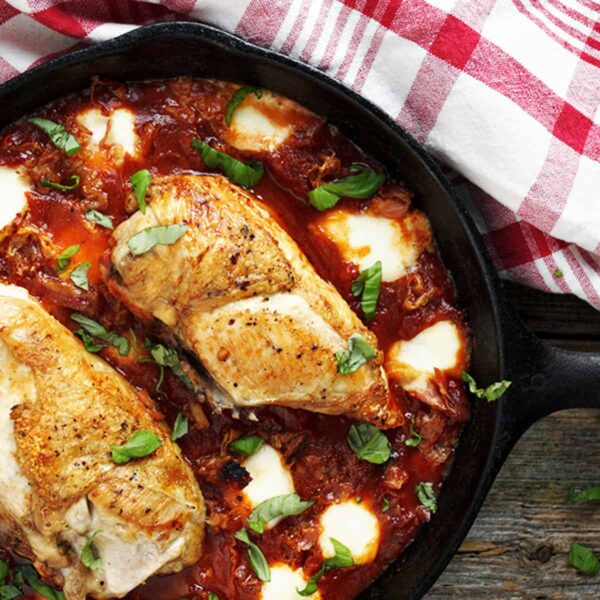 Chicken Breasts with Tomatoes and Bocconcini

This delicious tomato, chicken and cheese one-pan dinner is delicious served with a side salad or served along with some cooked pasta.
Jump to Recipe
4.67 stars from 3 ratings

Looking for a delicious chicken breast recipe? This Chicken Breasts with Tomatoes and Bocconcini is an easy and delicious one-pan meal, with skillet browned chicken, tomatoes, pancetta and melted bocconcini. Delicious with just a side salad, or serve with a bit of pasta. 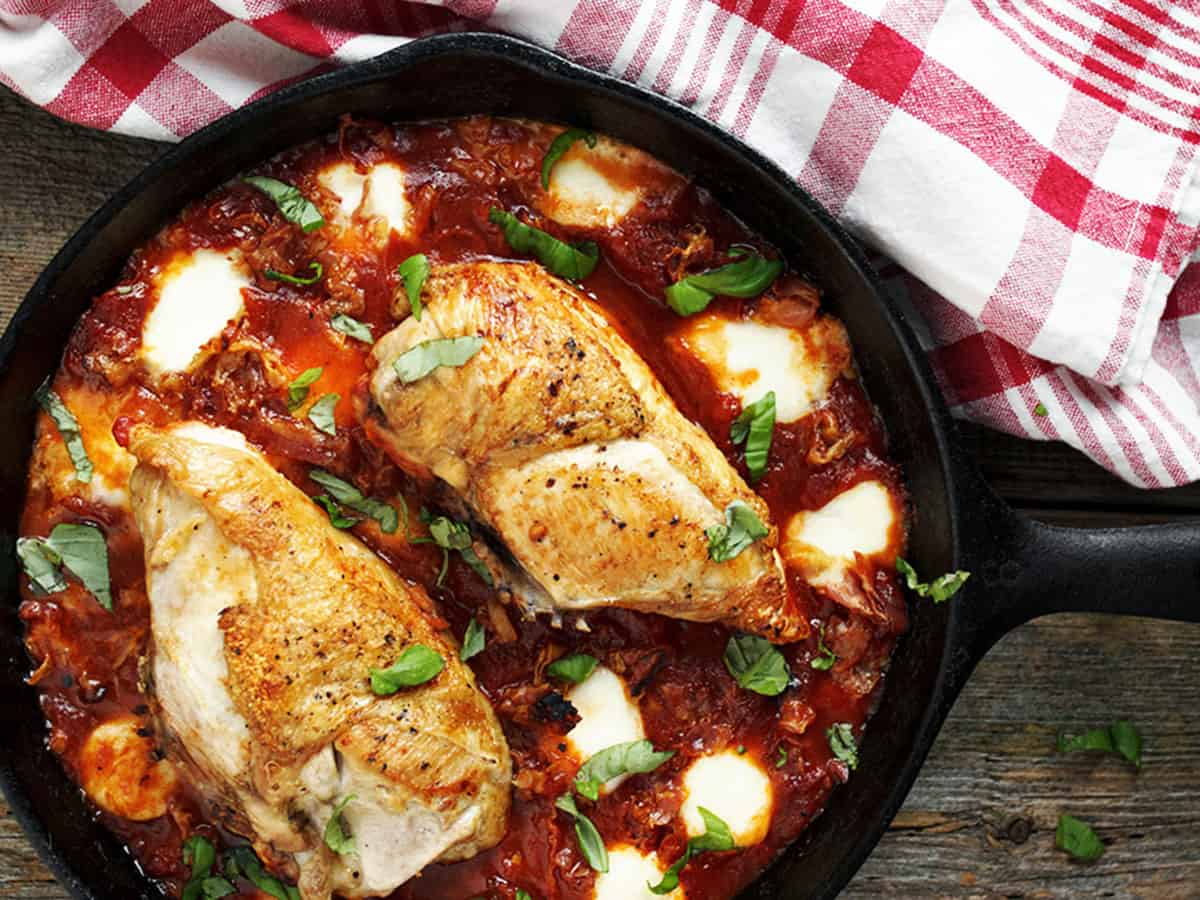 I spied this one on the New York Times Cooking site recently. One look at the photo and I was sold! There’s lots to love about this dish and it turned out to be fabulous served with a bit of penne pasta.

I debated what kind of chicken to use. I have been loving bone-in/skin-on thighs lately, but worried about the amount of fat that would cook off into the sauce. So I ended up using bone-in/skin on chicken breast.

I thought for a minute, I might cut it off the bone and just leave the skin, but decided to leave it as is. It turned out to be a great choice. It was so beautifully moist and I’m sure the bones added some nice flavour to the sauce. The nice thing about chicken breasts as well, is that it is easy to just cut away the bone after cooking, if you like, or for serving kids who aren’t keen on bones with their chicken.

I think this would still be a good dish if you want to use skinless/boneless chicken breasts or thighs. You won’t get the lovely crisp skin or flavour for the bones, but the generous sauce will ensure that they don’t dry out.

I used cherry-sized bocconcini, but generous chunks of mozzarella would also work nicely (either fresh mozzarella or pizza-style).

This dish re-heats really well. I made mine ahead and re-heated in a 350° F. oven just until warm. The sauce thickened a bit, but the chicken didn’t dry out at all. For boneless/skinless chicken, I would consider covering with foil for some or all of the re-heating to keep the moisture in the chicken.

The original recipe doesn’t call for removing the chicken at the end of the cooking. I chose to do so, since the chicken breasts I used sat so much higher in the pan, I knew that chicken skin would burn before the bocconcini would brown. I also chose to return the pancetta to the dish before broiling, rather than using it as a garnish as Clark suggested.

You could use regular bacon in this dish, in place of the pancetta. 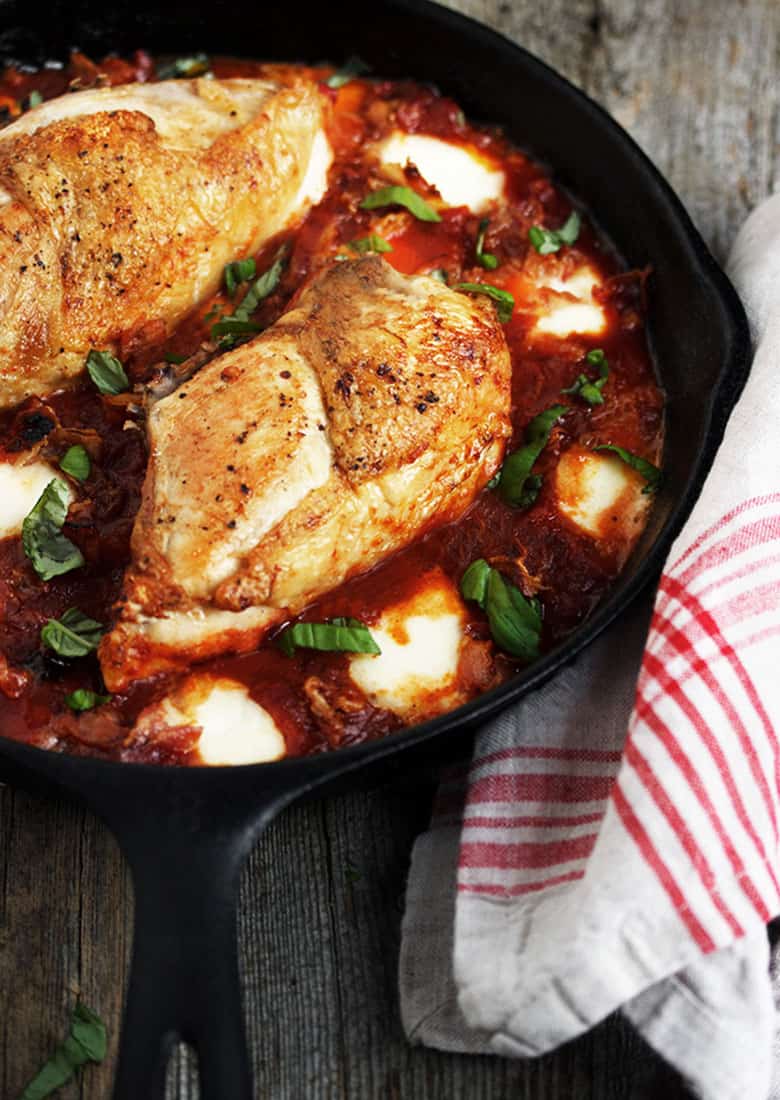 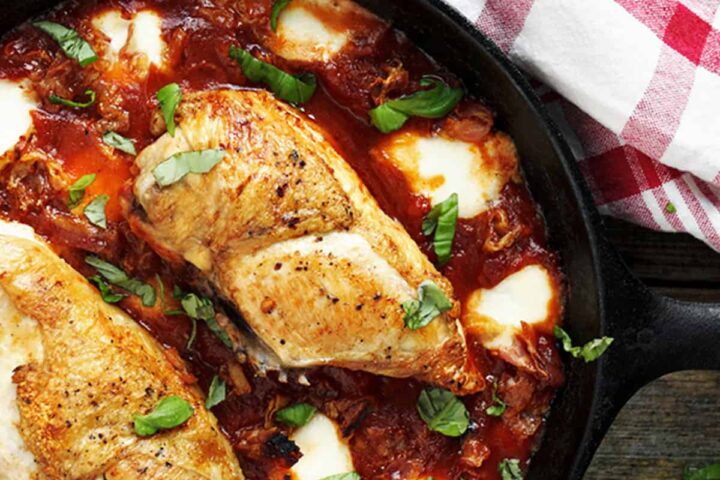 Get the Recipe: Chicken Breasts with Tomatoes and Bocconcini

This delicious tomato, chicken and cheese one-pan dinner is delicious served with a side salad or served along with some cooked pasta.
4.67 stars from 3 ratings
Print Recipe Pin This Leave a Review
Prep Time: 20 mins
Cook Time: 40 mins
Total Time: 1 hr
Yield: 4 servings

18 comments on “Chicken Breasts with Tomatoes and Bocconcini”