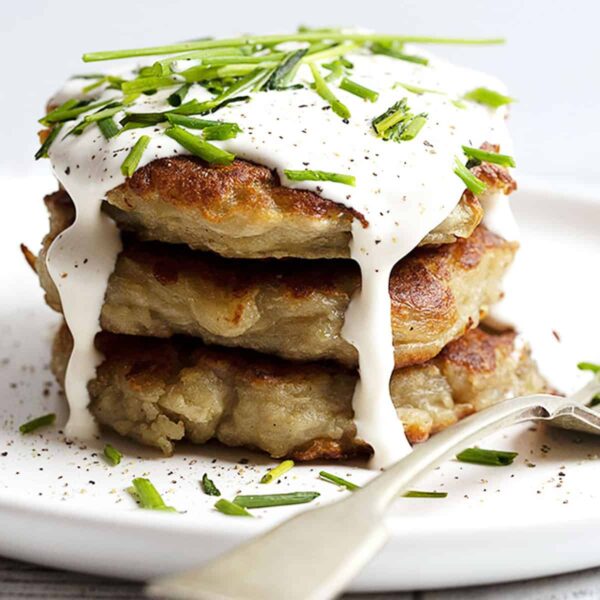 This traditional Irish potato cake is made with a mixture of cooked, mashed potatoes and raw shredded potato, bound together with flour and buttermilk, then fried in a skillet. 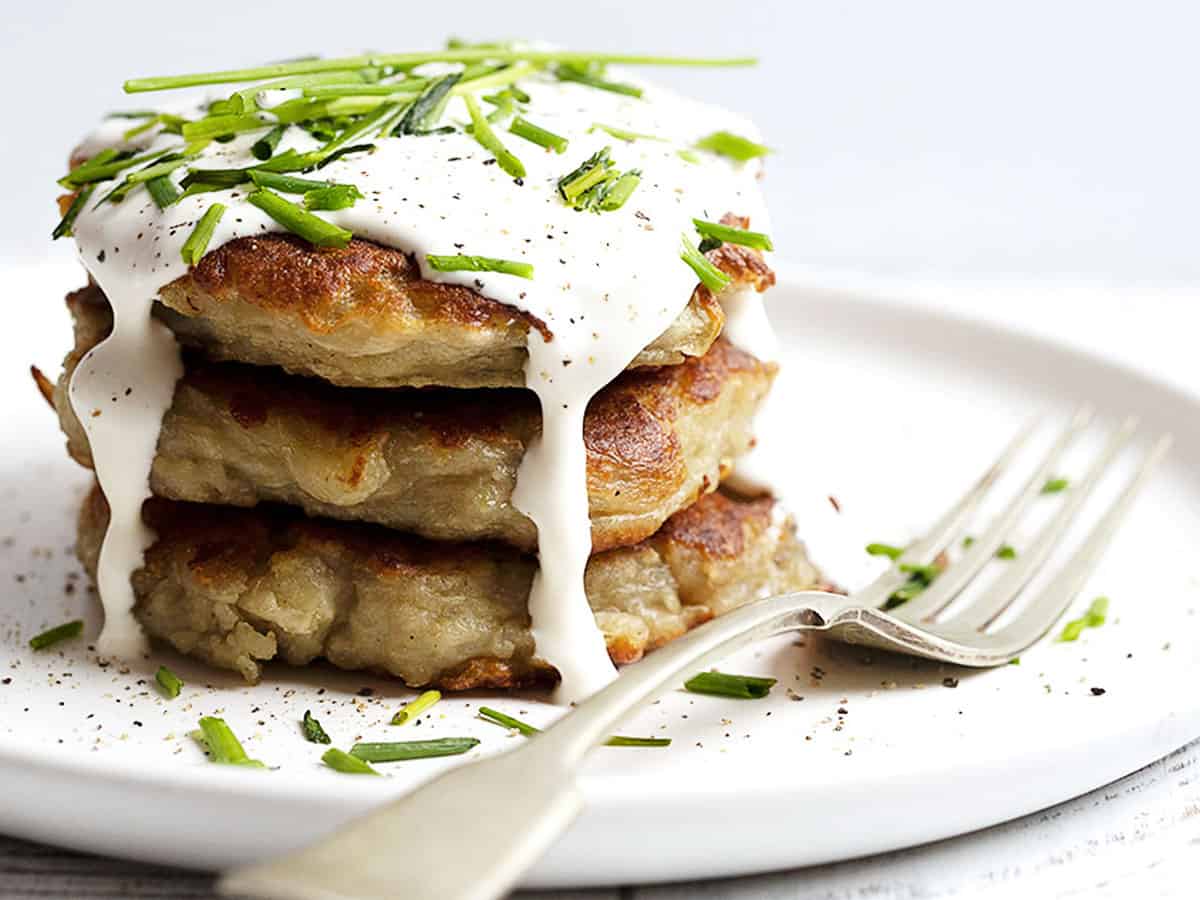 When I married a man of Irish ancestry, I inherited a very Irish last name. I’m not even a little bit Irish myself. My ancestry is very British. When I told my husband that I made Irish potato cakes, he was thrilled in a way only an Irishman could be. And when I told him I topped them with Crème Fraîche and chives, he laughed and told me my British was showing :)

Boxty is, of course, a traditional Irish potato recipe and there are about as many different Boxty recipes as there are Irishmen. This version is very much potato, with a mixture of mashed potatoes and raw, grated potatoes, held together with some flour and buttermilk. The thick potato batter is then fried in small rounds “on the griddle” or alternately, as one large round “on the pan”.

You can enjoy these potato cakes plain, or top with sour cream and green onion or with Crème Fraîche and chives … as you like. Serve them alongside bacon and eggs for a hearty breakfast or top them with an egg for anytime enjoyment. 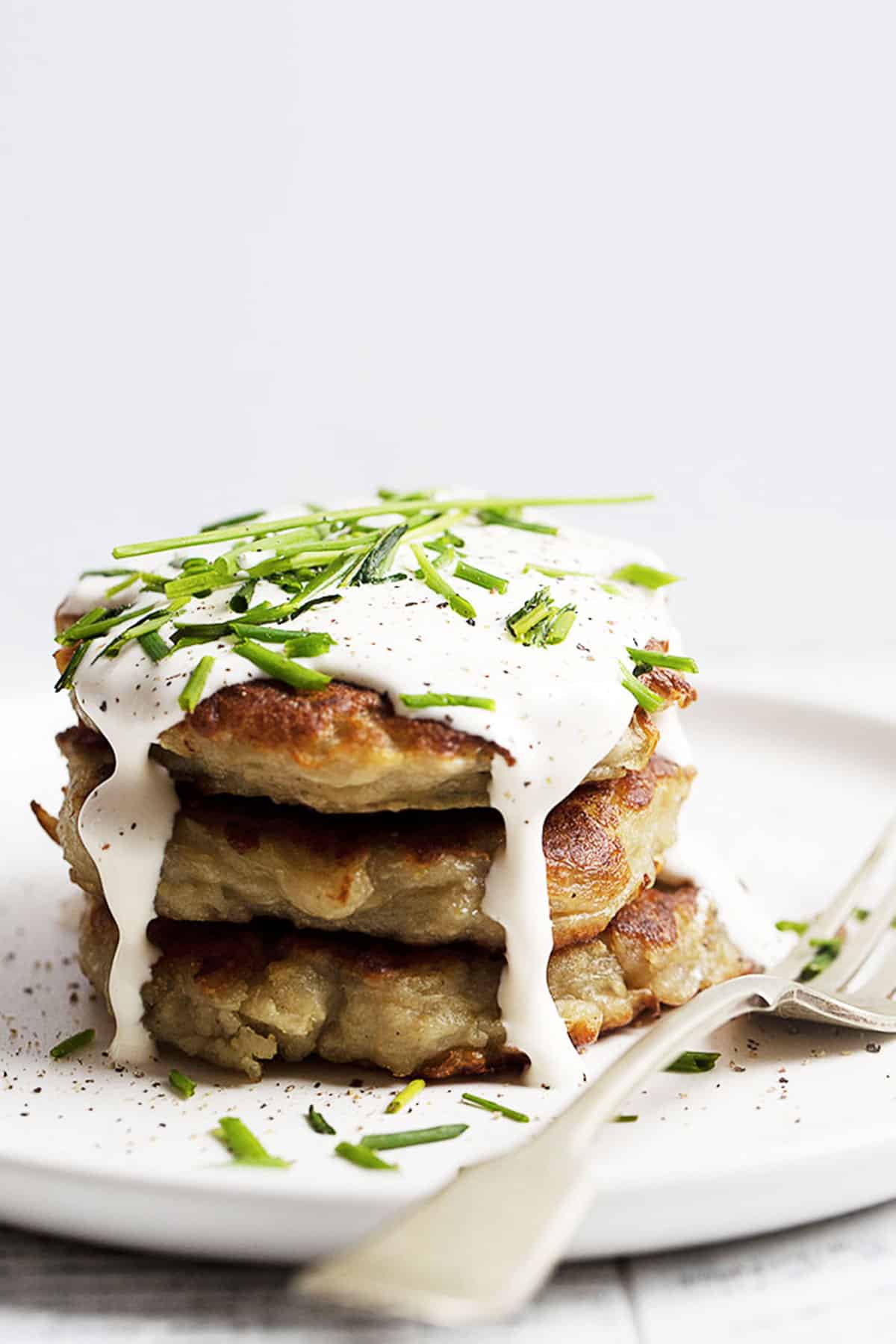 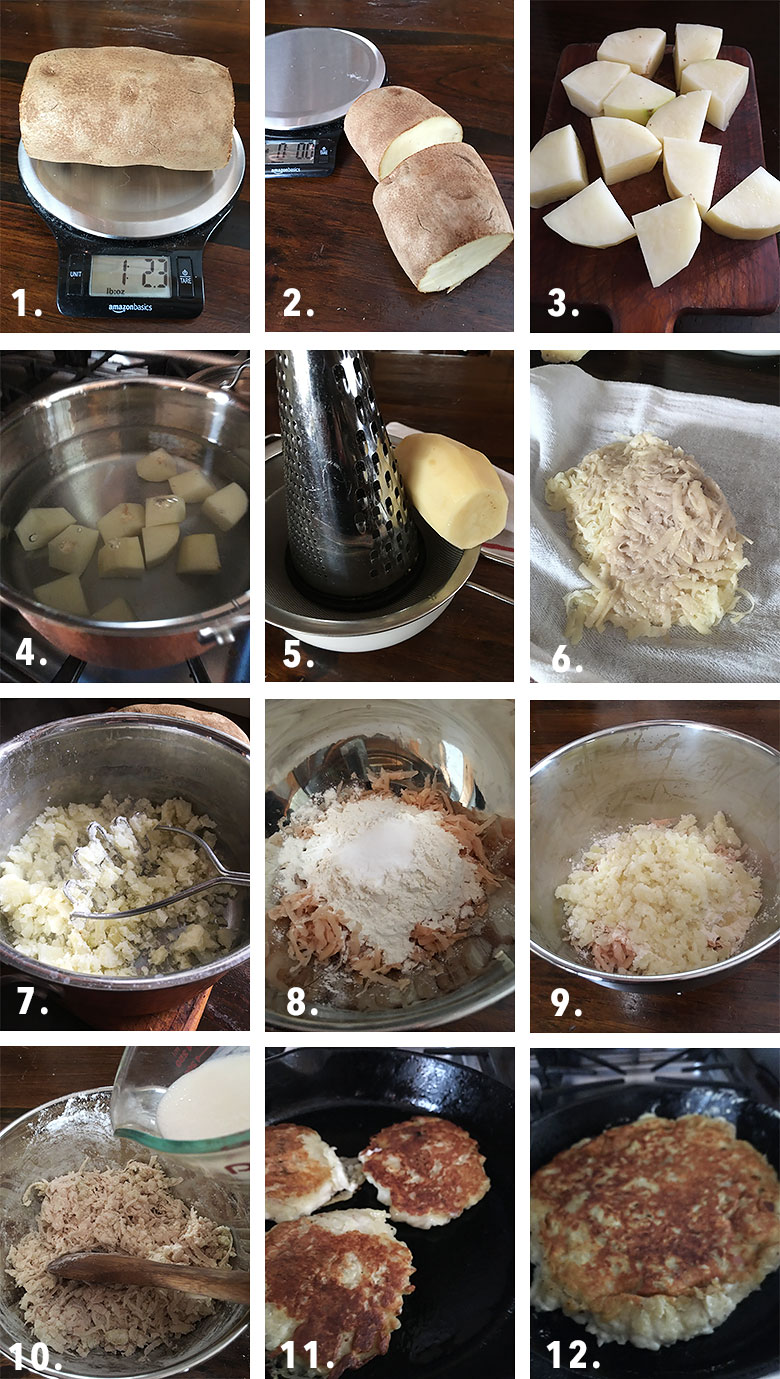 Just a heads up that if you squeeze your shredded potato with a clean tea towel, that the colour/stain from the potatoes may not come out even after washing. So either use a tea towel that you don’t care if it stains, or use an alternate method to get the liquid out of your potatoes (coffee filter, cheesecloth) or just squeeze well by hand.

If you happen to have left-over mashed potatoes, you can use them in place of cooking the cubed potatoes. It doesn’t matter if they are already buttered and salted. Just use 1 cup of them as is. Perhaps reduce the added salt in the batter slightly to compensate for the bit of salt in the prepared mashed potatoes.

As noted, instead of small rounds, you can use the batter to make one large potato cake. A couple of extra notes for the large version –
1) Don’t spread the batter to the edge of the pan, so you have room to flip it.
2) Allow the underside to cook/set well before trying to flip it.

Here is “boxty on the pan”, cooked as one large round and the cut into wedges to serve. 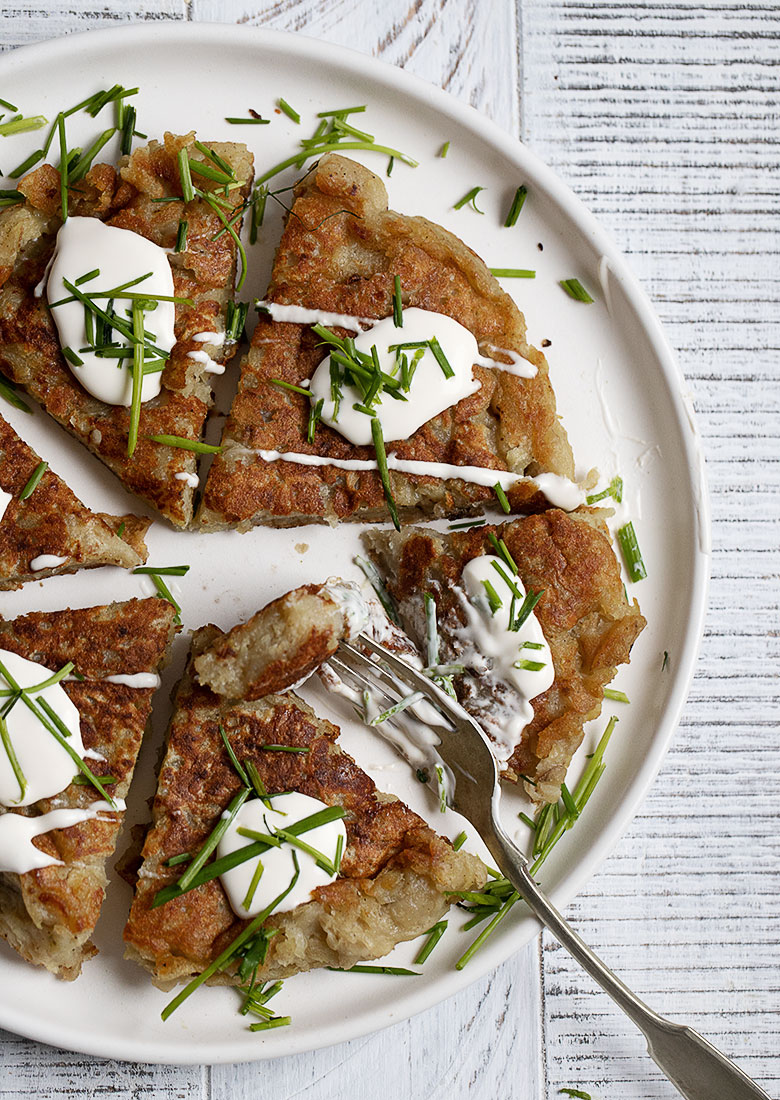 Patience and carefully heat management is the key to Boxty success. The potato mixture is very thick and will take some time to cook through. Count on each batch taking 6-8 minutes (3-4 minutes, per side) to cook. I actually like to flip them 3 or 4 times, watching the heat so that the outside gets golden brown, but not letting it get too dark before the inside cooks. Somewhere around medium-low works best. 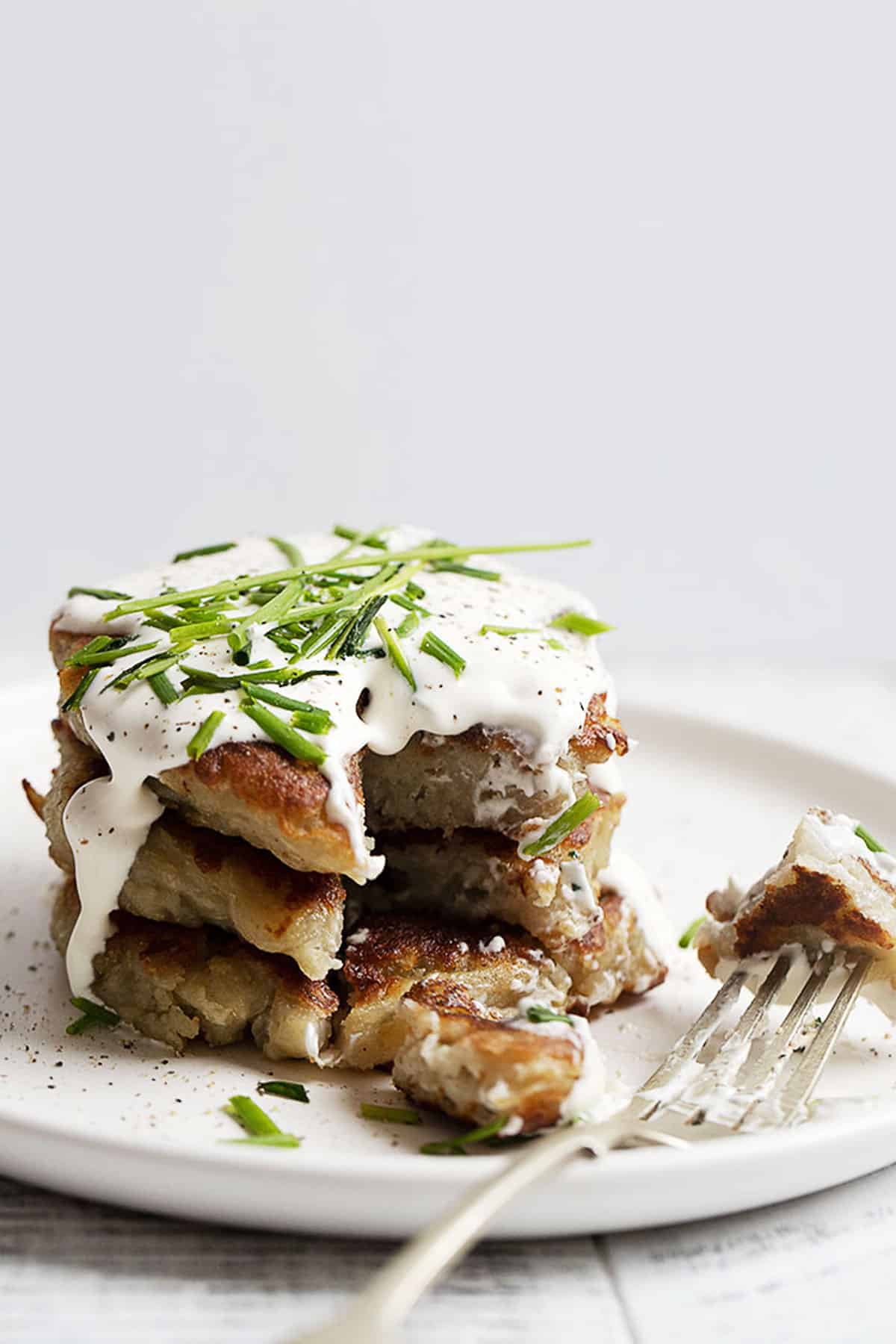 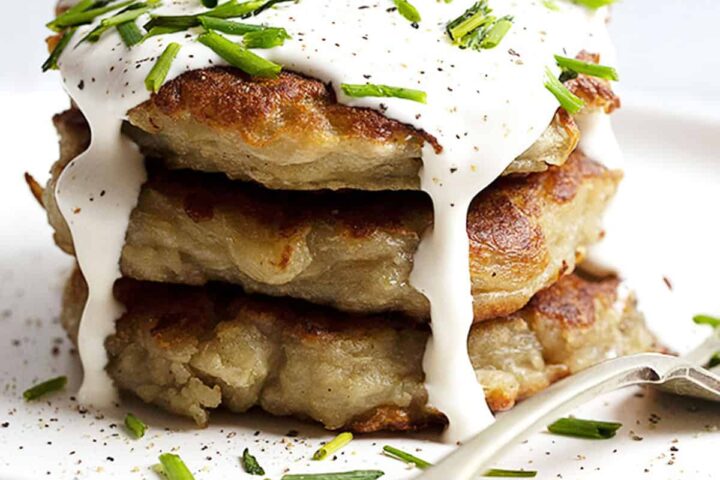 *Note 1: Make your own buttermilk substitute by combining 1/2 cup regular milk with 1 1//2 tsp lemon juice or white vinegar. Stir and let stand 10 minutes before using. Your grated potatoes may turn pink once they are exposed to the air. It's a normal reaction of the potato enzymes reacting to oxygen. They are odd looking but perfectly safe to eat. Instead of small rounds, you can use the batter to make one large potato cake. A couple of extra notes for the large version -
1) Don't spread the batter to the edge of the pan, so you have room to flip it.
2) Allow the underside to cook/set well before trying to flip it. Nutritional information does not include any toppings. Be sure to read the Ingredient and Cook's Notes above the recipe card for more tips for making this recipe.
Cuisine: Irish
Course: Side Dish
Author: Jennifer
Calories: 102kcal, Carbohydrates: 21g, Protein: 3g, Fat: 1g, Saturated Fat: 1g, Cholesterol: 2mg, Sodium: 301mg, Potassium: 299mg, Fiber: 1g, Sugar: 1g, Vitamin A: 25IU, Vitamin C: 4mg, Calcium: 27mg, Iron: 1mg
Tried this recipe?Mention @seasonsandsuppers on Instagram or tag #seasonsandsuppers. 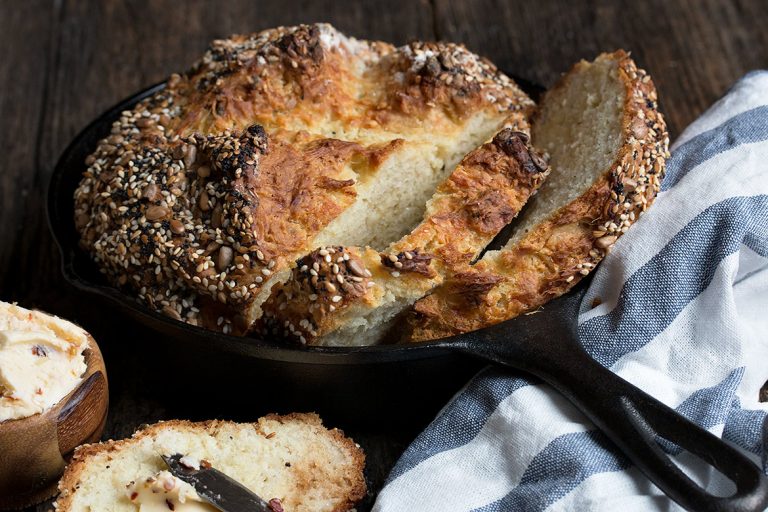 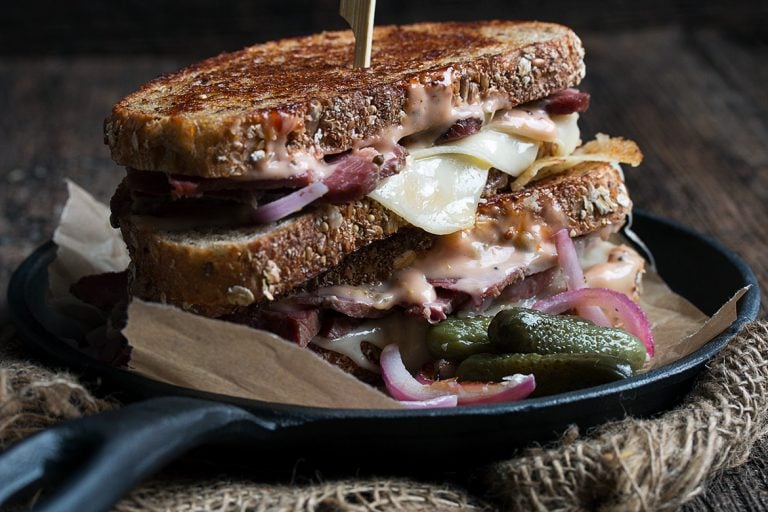 Grilled Reuben Sandwich
Have leftover corned beef? Use if for easy and delicious grilled reuben sandwich, made with quick pickled onions, swiss cheese and homemade Thousand Island dressing.
Get the Recipe
www.seasonsandsuppers.ca 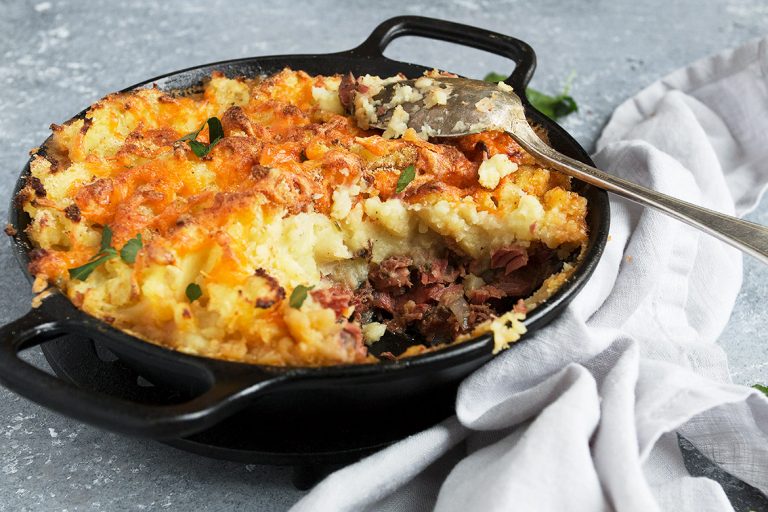