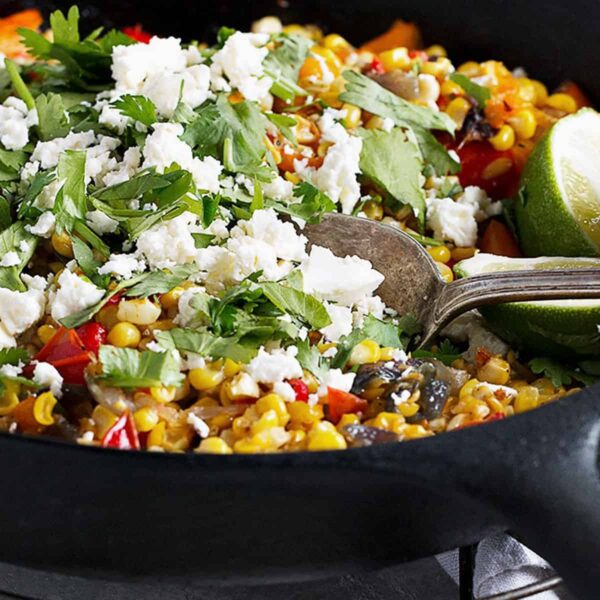 This Tex-Mex inspired dish featured oven roasted and charred corn with bell peppers and red onion. Topped with feta and cilantro. Just pop it into the oven or you can make this on the BBQ, too!
Jump to Recipe Pin Recipe
5 stars from 12 ratings

A quick and easy corn side dish recipe, this corn and pepper skillet can be enjoyed warm or at room temperature. Make it in the oven or completely on the BBQ! 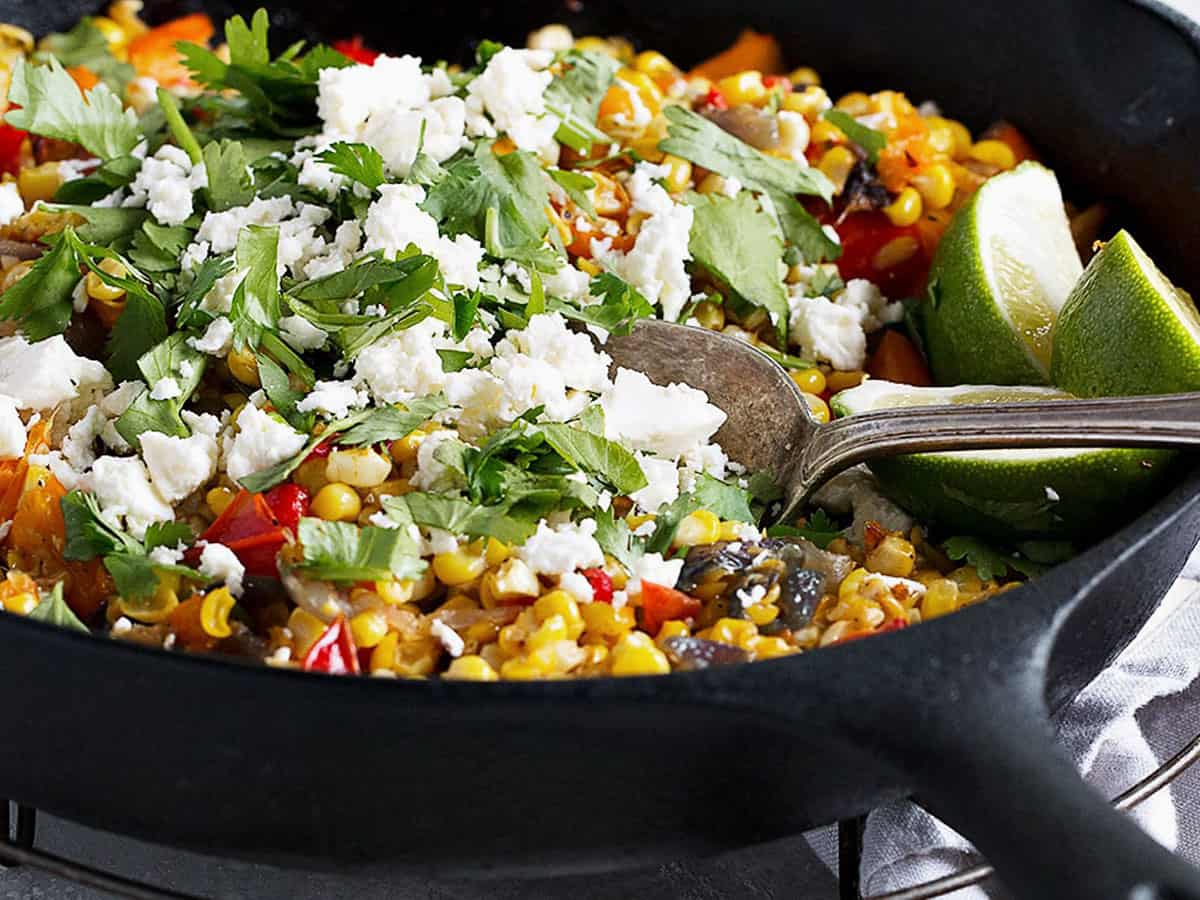 It’s a great, easy and flavourful side dish for any meat or fish. It can be cooked in the oven or if it’s too hot to turn on the oven, make it completely on the BBQ! It’s a great use for corn on the cob that’s a tiny bit past its prime. As we’ll be roasting it up, it’s fine to use corn that has dried out a bit.

When fresh corn is not in season, make this one with frozen or canned corn, instead!

And last, but not least, it’s really, delicious. The corn, red and poblano peppers are roasted to sweet and lightly spicy perfection. On top, a scattering of quick pickled red onions, feta cheese and fresh cilantro add great colour and flavour. There’s also a lovely, tangy Crema, that you can drizzle on to take it up a notch even more.

You could definitely eat this hot out of the oven or off the grill, but I enjoy it most just slightly warm or at room temperature, especially for Summer eating.

As noted, you could use frozen or canned corn instead of corn cut off the cob for this dish. For frozen corn, I would thaw it a bit first, if possible, so that it starts cooking more quickly.

I can’t find Mexican cotija cheese in these parts, but if you can find it, you could use it instead of the feta.

You can spice this one up as you like, with a pinch of cumin or chili powder on the vegetables before roasting.

This dish makes a great vegetarian filling for tacos and quesadillas, too!

Too hot to turn on the oven? How to make this on the BBQ!

Heat grill to high (or about 400 F. if your grill has a thermometer). Heat the cast-iron skillet inside a closed grill for 5 minutes, then follow the recipe by roasting inside the closed grill for 15 minutes, stirring once. Allow to cook, stirring on an open grill over flame to char it up a bit. Remove from grill and allow to cool a bit. Top per the recipe and enjoy! 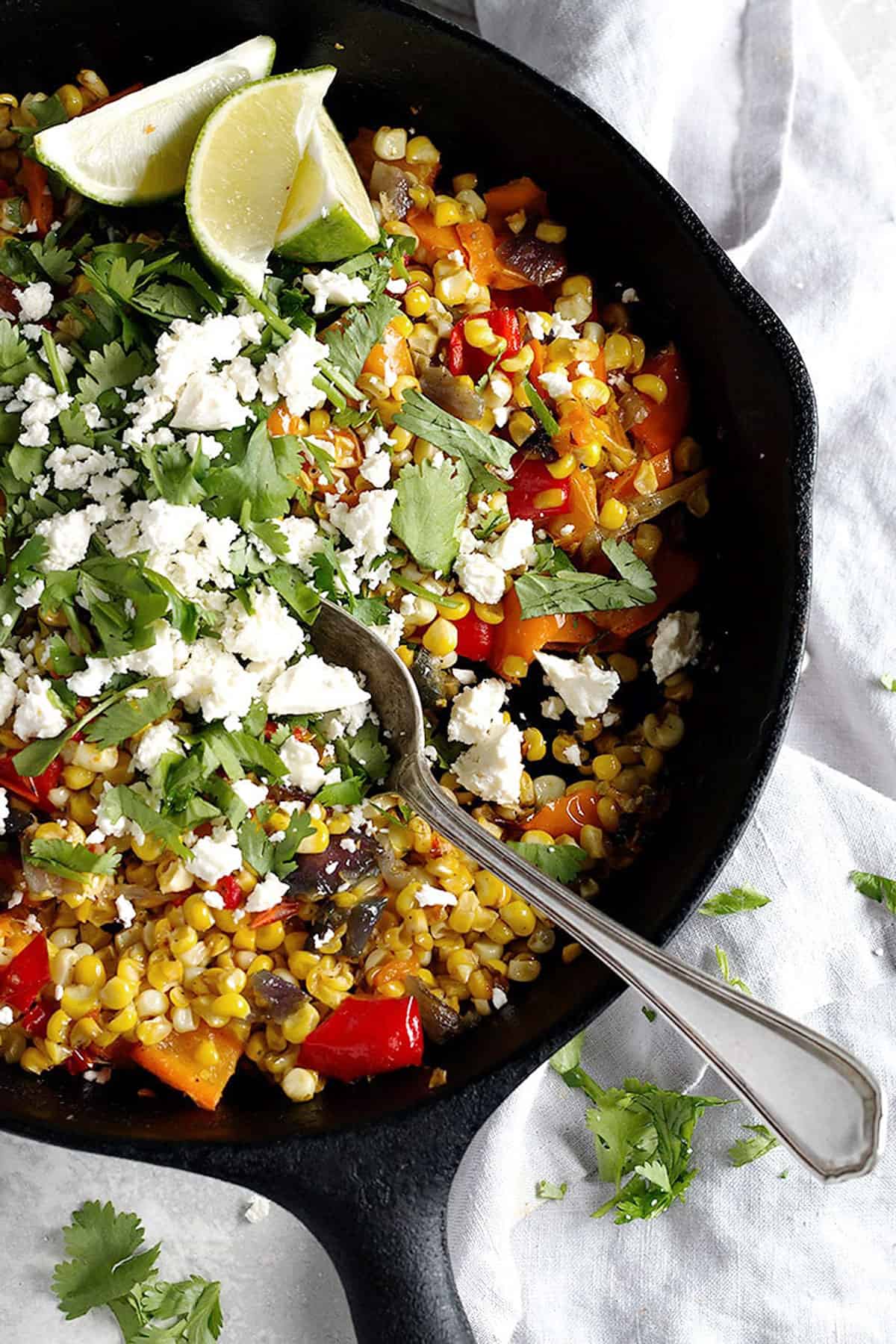 Get the Recipe: Easy Oven Corn and Pepper Skillet

This Tex-Mex inspired dish featured oven roasted and charred corn with bell peppers and red onion. Topped with feta and cilantro. Just pop it into the oven or you can make this on the BBQ, too!
5 stars from 12 ratings
Print Recipe Pin This Leave a Review
Prep Time: 20 mins
Cook Time: 20 mins
Total Time: 40 mins
Yield: 3 servings