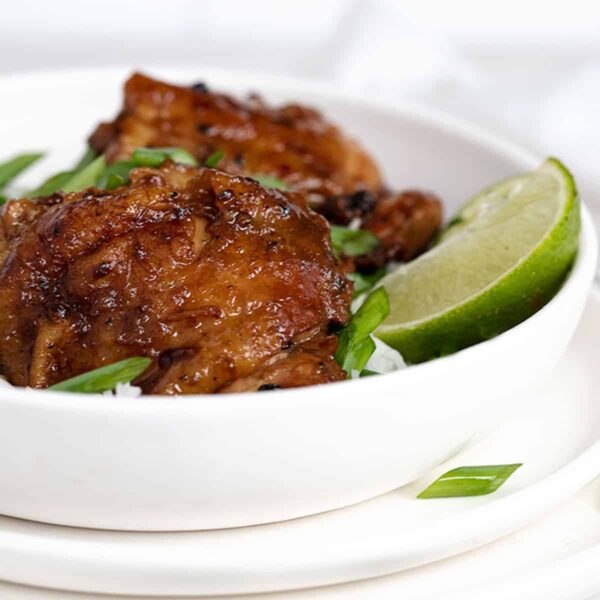 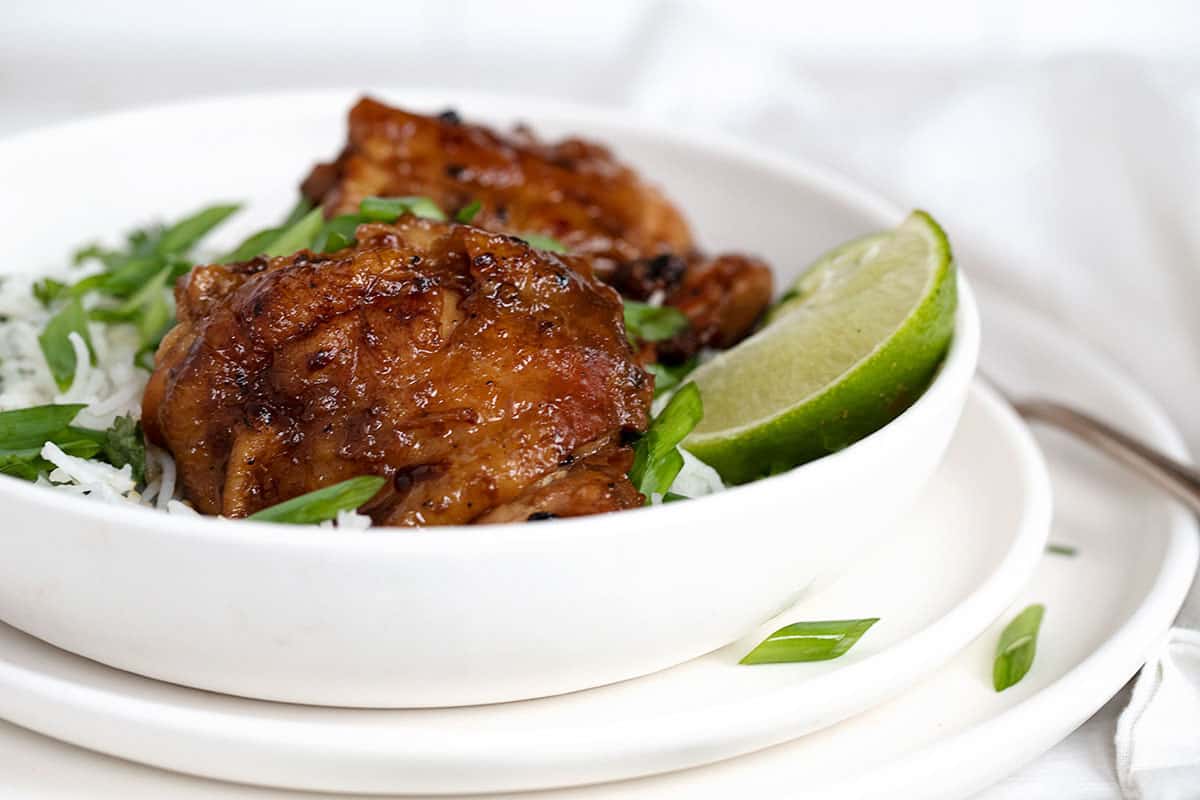 About this Chicken Adobo recipe

This classic Filipino Chicken Adobo with coconut milk (Adobong Manok sa Gata) is simmered slowly with soy sauce, vinegar, garlic, pepper and bay leaves until the chicken is super flavourful and falling off the bone, all in a delicious sauce. The addition of coconut milk to the sauce adds an extra layer of flavour and just a touch of creaminess to the sauce.

You’ll love that this dish is totally hands off after you sear the chicken and add the sauce. And you can start with just about any type of chicken.

I love to serve it with an easy Cilantro Lime rice, for an easy and delicious dinner.

Chicken – you can use any chicken, though bone-in chicken makes the most flavourful dish. I’ve used bone-in/skin-on chicken thighs here, but bone-in breasts or drumsticks are also nice, or a combination.

You can also use boneless/skinless chicken breasts or thighs, if you like.

Soy Sauce – low-sodium soy sauce is highly recommended, to avoid an overly salty finished dish. If you only have regular soy, use a touch less.

Vinegar – traditionally coconut vinegar would be used for Chicken Adobo, but it is not easy to find. Alternately, you can use Rice Vinegar, White Vinegar or Cider Vinegar. I prefer the flavour of Rice Vinegar, but it’s really a matter of taste. Experiment and see which you prefer.

Coconut Milk – I usually opt for full-fat coconut milk, but lower fat coconut milk will also work here. You’ll need one of the small, mini cans of coconut milk. If you only have a large one, be sure to stir together the cream and water before measuring out the required amount. You can freeze the extra for another time.

Garlic, Pepper and Bay Leaves – Finally, you’ll need a heads worth of garlic cloves, ideally some whole peppercorns that you crush up yourself, a bit of red pepper flakes and some bay leaves. 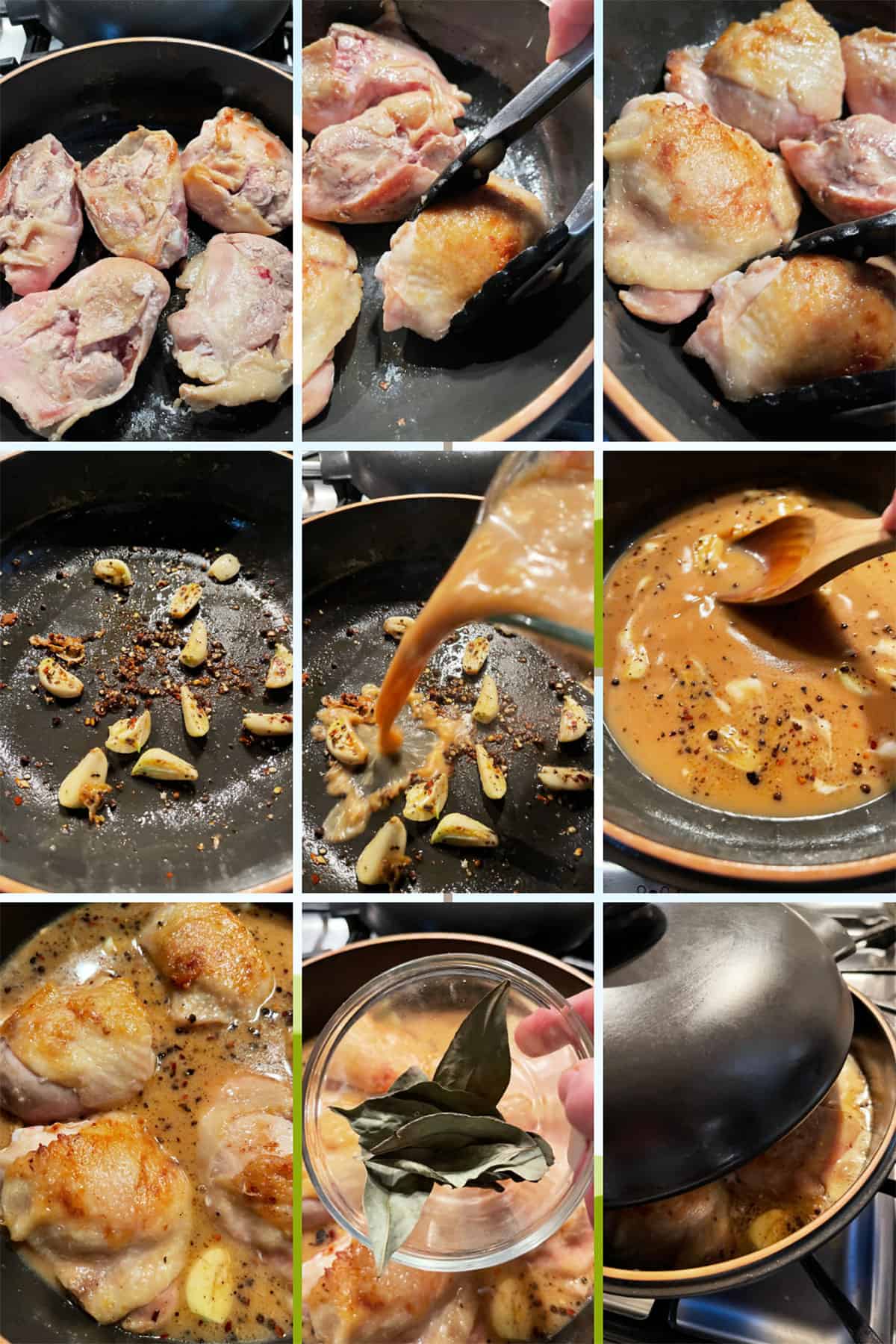 First Steps: Brown the chicken in a bit of oil until golden, then remove to a plate. Briefly heat the garlic, red pepper flakes and pepper in the skillet, then add the coconut milk, soy sauce, vinegar and water mixture to the pan. Stir until the coconut milk melts and then bring to a boil.

Return the chicken to the pan, add the bay leaves and cover. Reduce heat to medium low and simmer, partially covered, for 30 minutes. 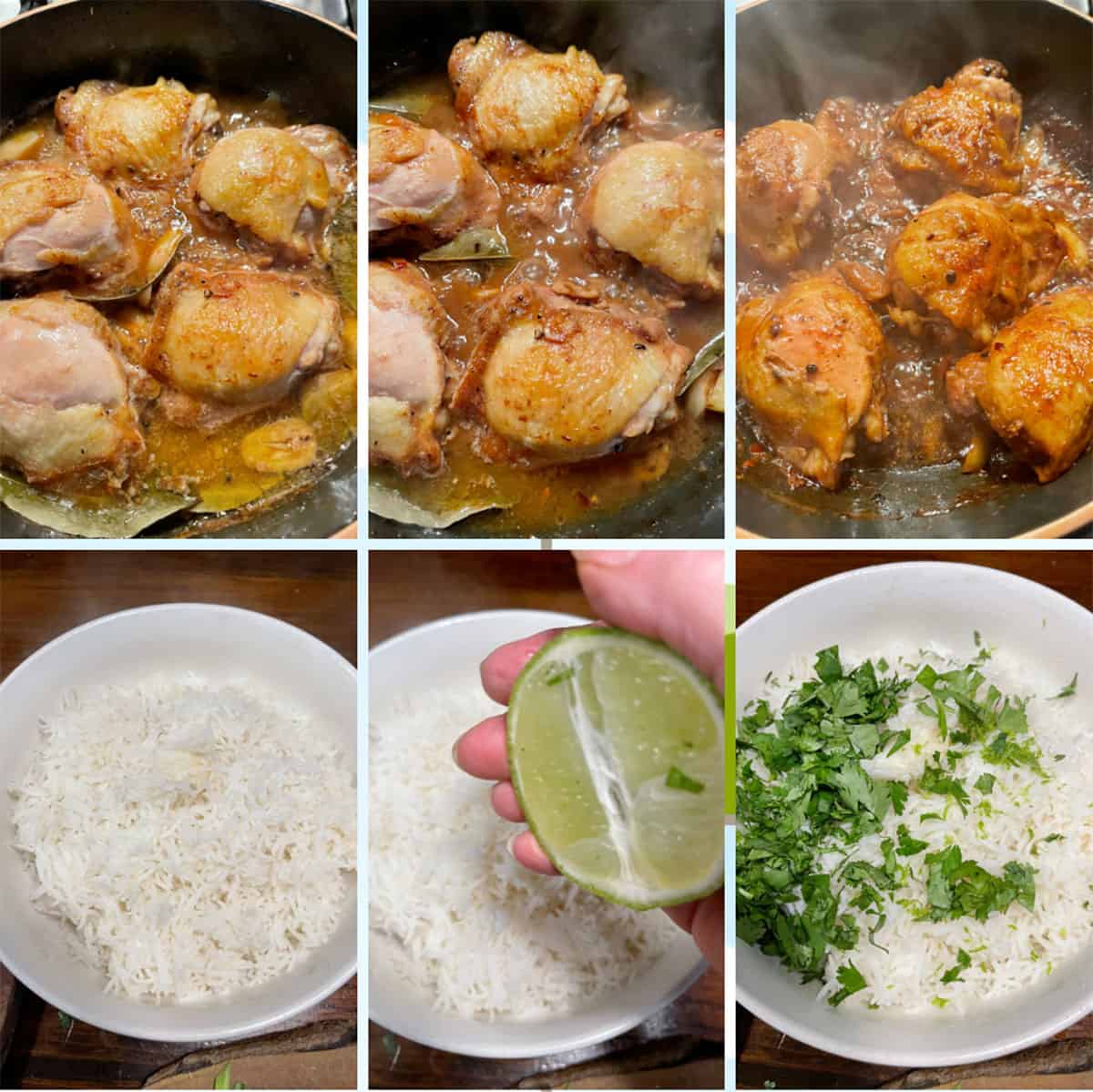 To Finish: Remove the lid completely and continue simmering another 20-30 minutes, flipping the chicken regularly, until the sauce has greatly reduced and thickened nicely. Remove and discard the bay leaves.

Meanwhile, cook some rice and when ready, stir in lime juice and zest and a handful of fresh, chopped cilantro. Serve the chicken over the rice, with lime wedges and chopped green onion.

Making ahead, storage and freezing

Chicken Adobo re-heats well, so it’s fine to make ahead and re-heat or to enjoy as left-overs.

Left-overs will keep in the fridge for about 2-3 days or you can freeze up to 2 months.

If you are an adobo fan, you might want to try my Pork Adobo recipe, too! It’s made with pork shoulder. 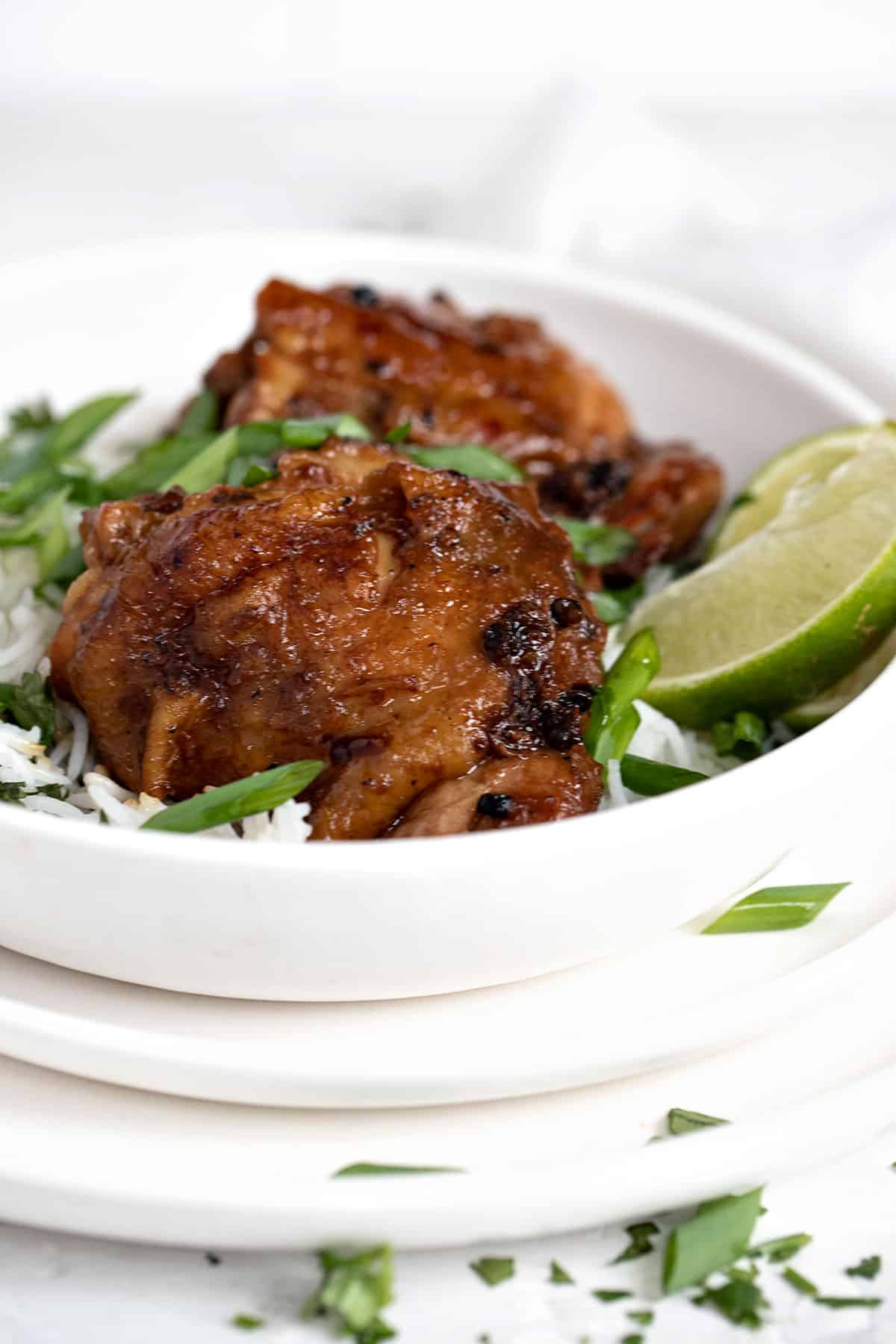 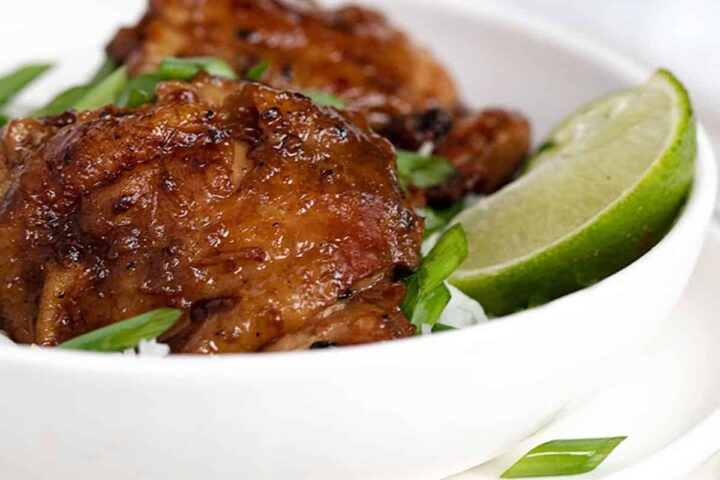 Get the Recipe: Chicken Adobo with Coconut Milk

1. I tend to use bone-in/skin on chicken thighs, but bone-in/skin on chicken breasts, drumstick or a mixture of pieces also works. You can also use boneless, skinless chicken here, if you prefer.
2. Coconut vinegar is most classic in Adobo, but can be hard to find. White vinegar is a decent substitution or unseasoned Rice Vinegar. I tend to prefer Rice Vinegar as it has a smoother vinegar taste. Experiment with different vinegars to find your favourite.
3. Low-Sodium soy sauce is highly recommended, to avoid an overly salty dish. If you only have regular soy sauce, use a touch less. You can remove the chicken skin after browning the chicken, if you prefer, to reduce the fat in the sauce.  You'll find more tips and substitution suggestion above this recipe card, as well as Step-by-Step photos!
Cuisine: Filipino
Course: Main Course
Author: Jennifer
Calories: 478kcal, Carbohydrates: 6g, Protein: 34g, Fat: 34g, Saturated Fat: 11g, Polyunsaturated Fat: 7g, Monounsaturated Fat: 13g, Trans Fat: 1g, Cholesterol: 185mg, Sodium: 1206mg, Potassium: 519mg, Fiber: 1g, Sugar: 1g, Vitamin A: 158IU, Vitamin C: 3mg, Calcium: 41mg, Iron: 2mg
Tried this recipe?Mention @seasonsandsuppers on Instagram or tag #seasonsandsuppers.
Adapted from a NYT recipe