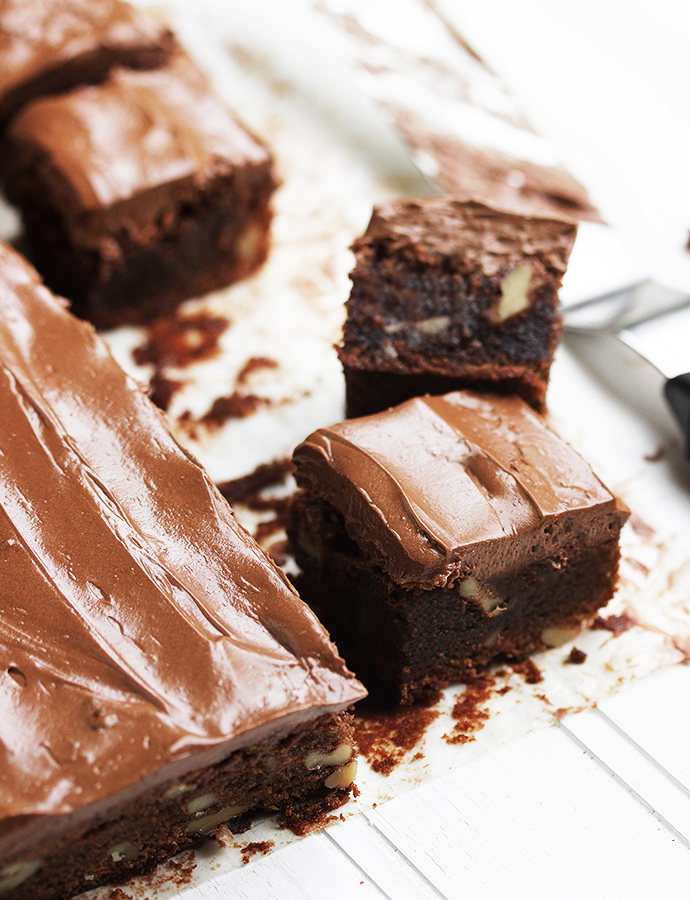 These delicious Frosted Chocolate Brownies are perfect for when you need a little chocolate therapy!

Considering my love of brownies, I was more than a little shocked when I realized that I don't have a single brownie recipe on this blog (unless you count these Brownie Cookies). Truth be told, I have a collection of brownies recipes to suit every possible mood or craving.

These aren't the "oeey, gooey, I need to disappear into a brownie" kind of brownies. Not that there's anything wrong with that!! These are the "mid-day, need a bit of sweet and chocolate" brownies. I consider these Diner-style Frosted Brownies, because if you've ever ordered a brownie from anywhere other than a bakery, there almost always frosted to make them "prettier". These are a classic brownie. It's what we expect when we seek out a brownie - full of chocolate, dense, nutty (if you like :) and topped with a rich chocolate frosting. They are not too moist, but also not too dry. They are not cakey, but also not fudgey. They are the middle ground of the brownie spectrum :)

Do be careful not to over-bake the brownies. I heard once that as soon as you can smell the brownies cooking, you should start checking and I think that's pretty sound advice. You want to catch these ones when a tester comes out moist, with crumbs (as opposed to covered with liquid).

As for the frosting, this one's heavy on chocolate and butter, and light on icing sugar. That means it's not cloyingly sweet and it's fairly soft. If you prefer a stiffer frosting, increase the amount of icing sugar until it reaches the consistency you like. This will, of course, increase the sweetness of the frosting.

Finally, about the nuts. If you don't like or can't eat nuts, then you can easily omit them. If you don't like walnuts, pecans would be a nice substitute. Otherwise, while I don't often put nuts in my brownies, I do like them in this type of brownie. It adds a nice contrast to the chocolate and a nice flavour, overall. 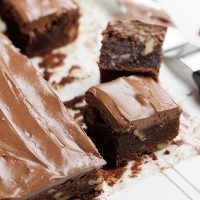