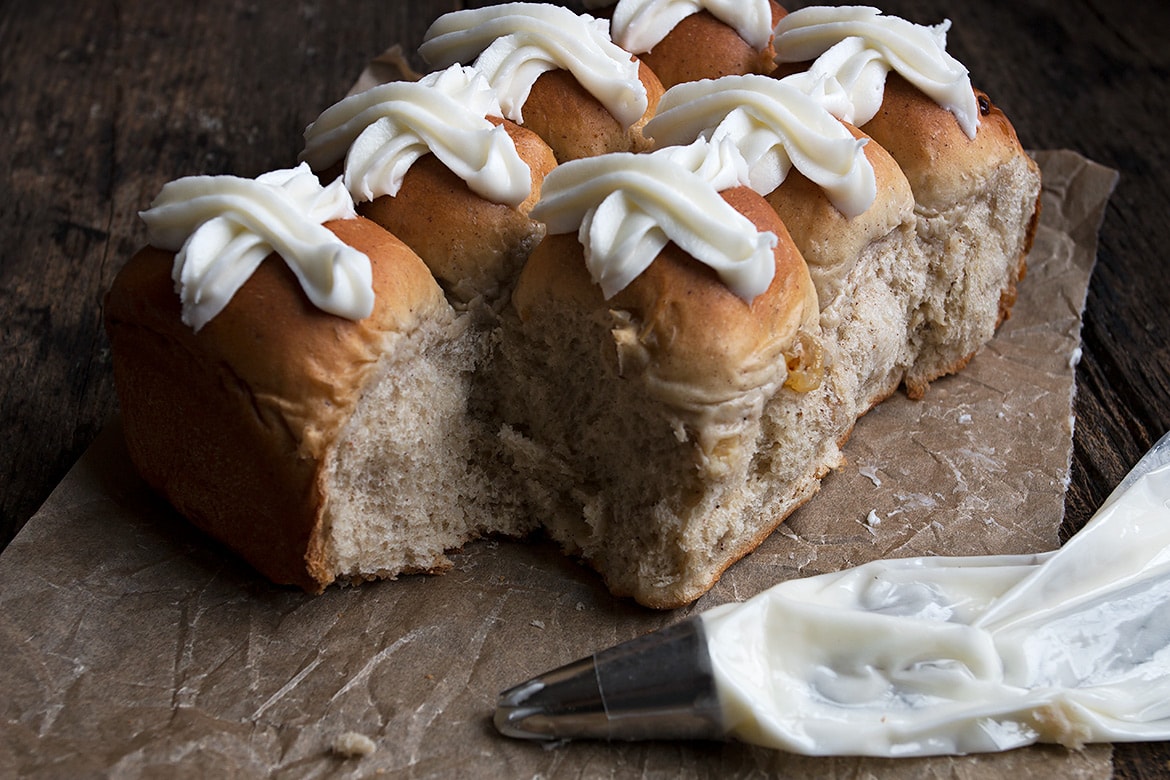 Classic and traditional Hot Cross Buns, that can be made with raisins, currants and peel, if you like. Topped with an icing cross.

In all my years of having this site, I have yet to share my family's traditional hot cross bun recipe. It's not that I've been holding out on you, it's just that I typically (traditionally) bake these on Good Friday and that always makes it too late to share on the site.

This year though, I'm one step, or more correctly, one year ahead of myself. These are, in fact, the hot cross buns that I made last year. I took photos and they have been sitting in my photo files ever since. And I almost forgot about them, but as I was browsing my photos earlier this week, there they were. So here they are, along with the recipe.

These are the hot cross buns my Mom always made. She always made them in a 9x13 pan, so they were sort of pull-apart style, rather than separate rounds. Maybe it's just what I'm used to, but I kind of love the soft sides that this method makes.

Another thing that is a little different with these buns, from most, is the icing cross. As a child, it was easily my favourite part. As a fully grown woman, it's still my favourite part of hot cross buns, as is probably obvious by the photos ;) And besides being a delicious addition to these buns, I can tell you that piping icing on top is a whole lot easier than piping the flour and water paste to make the cross! Win. Win. in my books :)

As noted, now that I'm the one making the buns, I go all out with the icing, using a nice big piping tip. You certainly can use less, but since hot cross buns are traditionally made to celebrate the end of Lent, it seems appropriate to me to be a little indulgent.

These buns have a nice variety of spices, but are actually lightly spiced as hot cross buns go. You can tweak the spicing to your taste, as you like. The one spice that will probably cause some to do a double-take is Mace. As this is an old recipe, it uses this lovely spice that was much more common years ago. Mace is not very commonly used today, but is still available to buy and a lovely addition to hot cross buns.

What is Mace and what can I use if I don't have any?

Mace spice is made from the outer shell of the nutmeg kernel, so it's flavour is similar, but more subtle and complex in flavour than nutmeg. If you can get your hands on some, it is a nice addition.

A good substitute for Mace is naturally, nutmeg and in most cases, can be substituted in equal amounts. In recipes that already specify nutmeg as an ingredient, usually along with other spices, consider just increasing the amount of all the spices marginally to make up for omitting the mace. 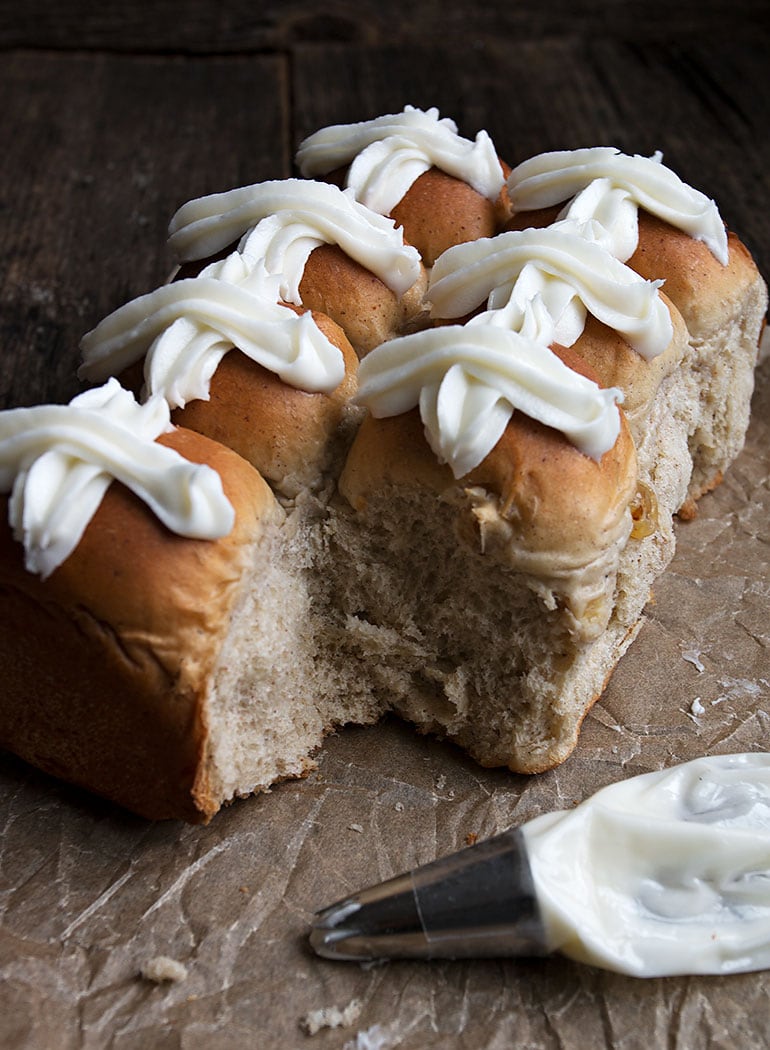 Scalding the milk (heating to 180F) before using deactivates some proteins in milk that can inhibit yeast production. While not absolutely necessary, it is always a good idea if you can. If you don't have a thermometer to test 180F, just remember that milk will boil at 212F, so 180F will be not to the boil, but at the point where there will be steam and small bubbles around the edge of the pan.

I have learned to love peel over the years, but if peel isn't your thing, just omit it. I don't always use it myself, but if skipping, I do like to add a touch of orange zest to the dough, just to add a bit of that citrus flavour.

If you like spicier hot cross buns, you can increase the spice amounts to 1 tsp for each.

Note that this recipe uses a triple rise, that is it is set out to rise to doubled, then punched down and allowed to rise again, before it is shaped into rolls and then set to rise a third time before baking.

I often make these buns in two loaf pans (9x5-inch works best), putting 8 buns in each pan. It's great for sharing, as I usually keep 8 for myself and give 8 away. Alternately, arrange in a 9x13 baking pan, making 20 buns and arranging in 5 rows of 4 buns.

Top Tip! As you are shaping your dough into balls, be sure not to have any raisins exposed on the top of the buns, as they will burnt and taste bitter when baked. Simply push them into the dough, so they are covered up.

As noted, these buns freeze beautifully after baking (before icing), so they can be made ahead and frozen. Keep in one piece and wrap well to freeze. Thaw on the counter overnight, still wrapped. Simply ice with the cross before serving. 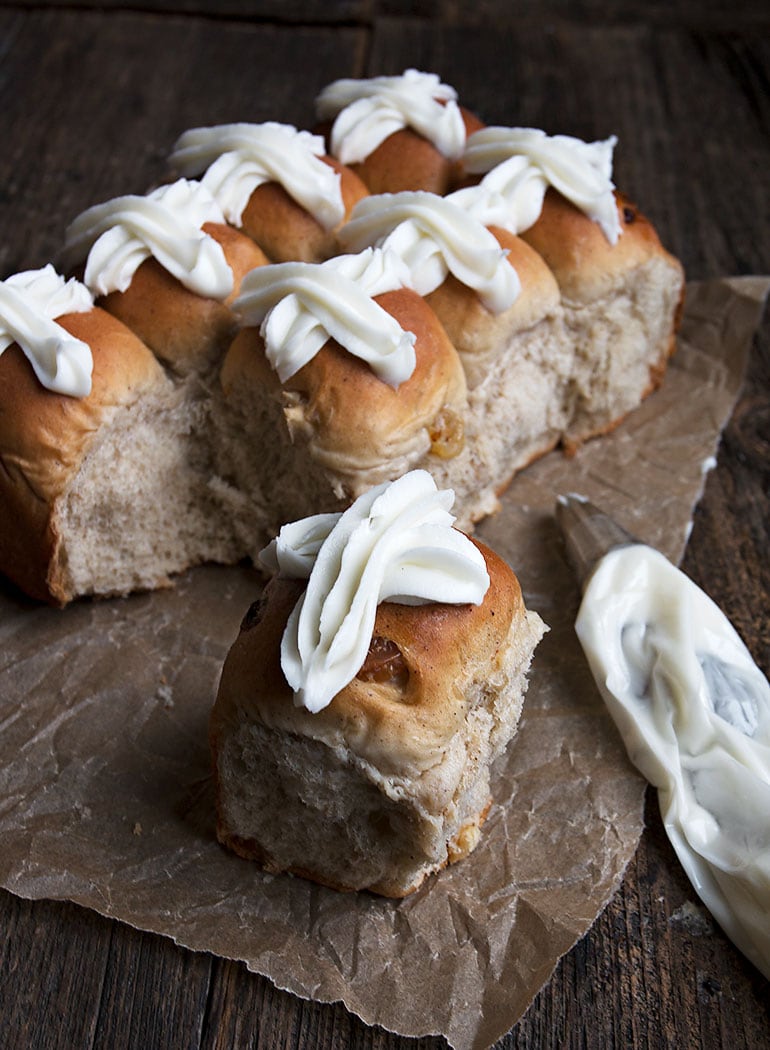 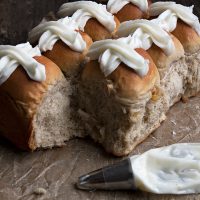 *Scalding the milk: Place milk in a small saucepan and heat until it reaches 180F or until it is steaming and there are small bubbles forming around the outside edge of the pan. Remove from heat and allow to cool to just lukewarm or room temperature before using. Scaleding removes some proteins in milk that can inhibit yeast production. While not absolutely necessary, it is always a good idea to do it, if you can. **To Plump Raisins: place raisins in a bowl and cover with very hot or boiling water. Allow to sit in the water for at least 15 minutes, then drain and dry well before adding to dough. If you like a spicier hot cross bun, you can increase the spices to 1 tsp of each. Be sure to read the "Cook's Notes" included with this post, where I share some valuable tips, options, substitutions and variations for this recipe! 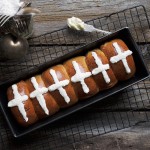 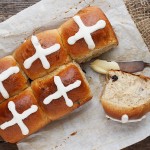