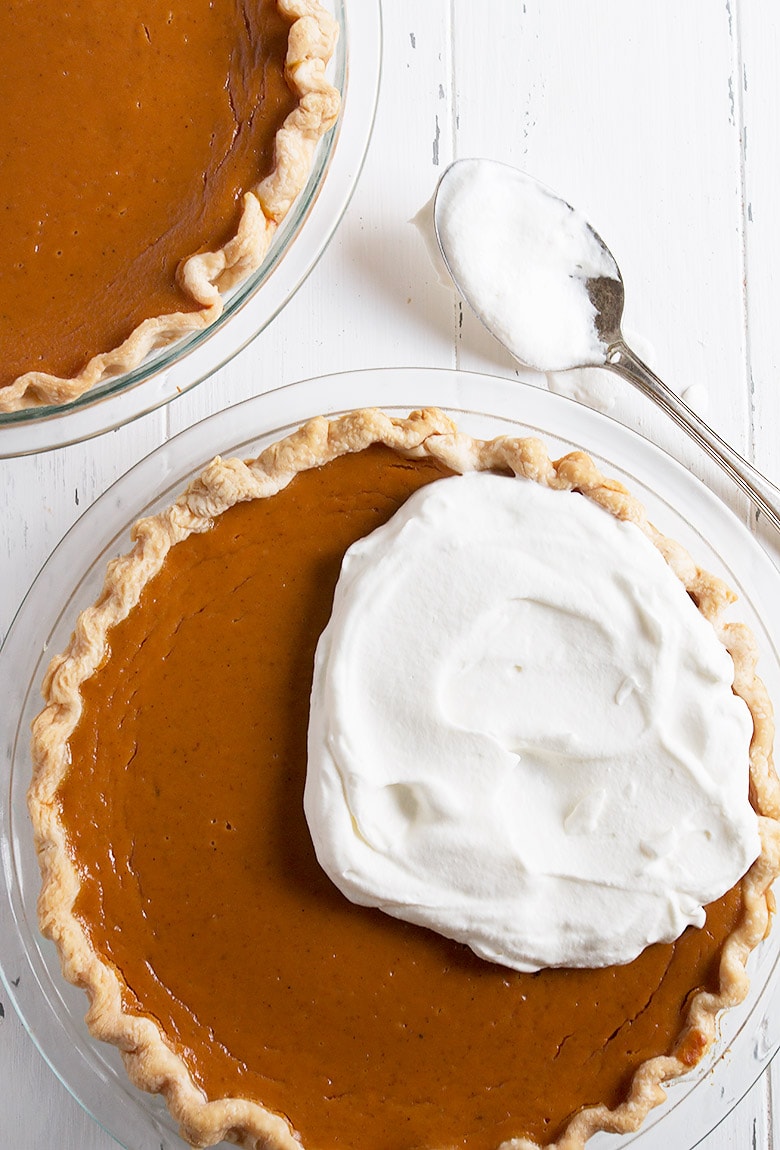 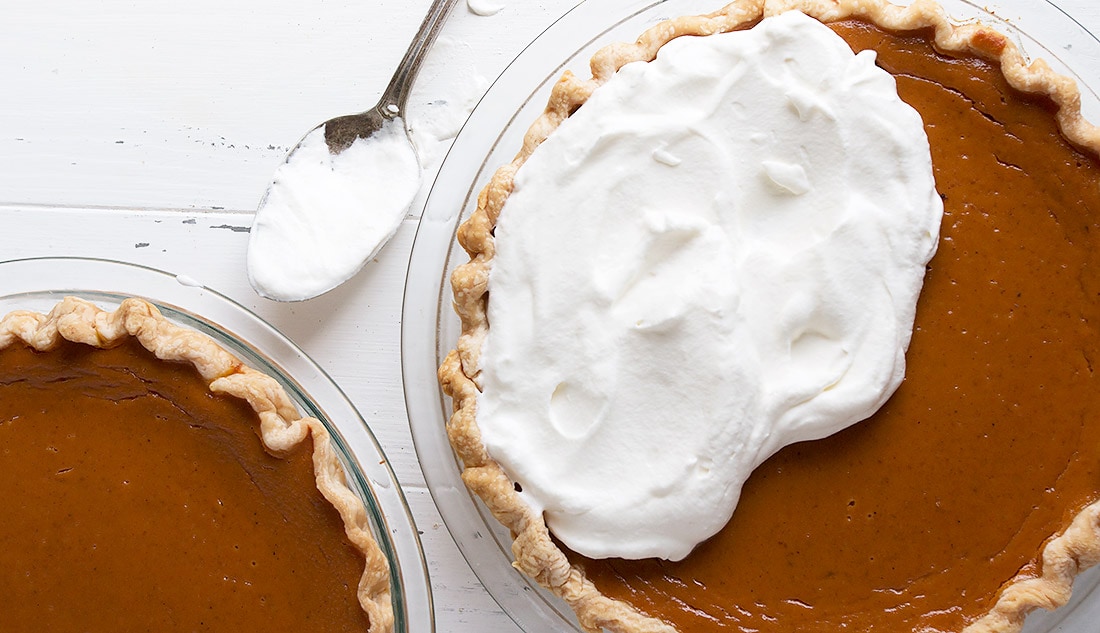 Now I have to start by saying that pumpkin pie is one of those things where a lot of people may already have their own "favourite". It's probably what you grew up eating. So if you already have a favourite, go-to pumpkin pie, you are already good to go. If you have yet to find your perfect pumpkin pie though, I would definitely urge you to give this one a try. I've eaten a lot of pumpkin pie over the years and I still believe this one is the best!

This is the pumpkin pie I grew up eating. It has a wonderful, fresh pumpkin taste, is beautifully moist and it's spiced nicely with equal parts of cinnamon, nutmeg and ginger. No cloves in this one. I personally find that cloves over-power the other flavours in a pumpkin pie, but that's just me :) In your kitchen, you're free to spice as you like it.

The other interesting addition to this pie is evaporated milk. It is combined with whole milk, for a perfectly creamy taste and texture, without the need for actual cream, which makes a pumpkin pie a bit too rich for me, especially after a big turkey dinner!

Pumpkin Puree: Even though we're making a pie, you don't want to use Pumpkin Pie Filling here. Look for Pure Pumpkin Puree. You will need the large (28oz-ish) size can for two pies.

Evaporated Milk: Full fat evaporated milk is highly recommended here. As this is a special, Thanksgiving dessert, using full-fat evaporated milk (and milk) will yield the nicest results and you will be thankful that you did when you eat it :)

So you don't want to use the evaporated milk that is labeled as 2%, 1% or fat-free. The one you want is the full-fat version and is the one that doesn't say any of that :)

Milk: Again, you'll want to use whole milk here, for best results. Whole milk is labeled as 3% or 3.25% generally.

Spices: As noted above, the spicing in this pie is equal parts of cinnamon, ginger and nutmeg. It results in a pleasantly, but not overly spiced pie. If you are a cloves in your pumpkin pie lover, you can certainly add some, though I would always urge you to try it as written first and adjust later.

Whipping Cream: Also known as heavy cream, this is a must for me to whip fresh for topping these pumpkin pies. If you'd prefer, you can always use the real whipped cream in a can.

Pie Shells: Use frozen or refrigerated, store-bought pie shells or your favourite homemade pastry. The pie shells do not need to be pre-baked. You will need two pie shells.

Add the eggs last. I have no idea why. It's just the note that is added to this family recipe, so that's what I do.

The filling will fill two pie shells, though the recipe can be doubled, if needed.

As your pies sit in the fridge, a small bit of the oils from the pumpkin may pool on the top of the pie. I like to use a bit of paper towel to blot it off before adding the whipped cream.

I always whip and top my pumpkin pies shortly before serving. It really only takes a minute to whip the cream and spread on top of the pies. You can do this a bit ahead (a couple of hours, at most), to keep things from being too last minute.

Don't attempt to top these pies with whipped cream while they still have any warmth to them, or you will have a mess on your hands. I like to make these ahead and thoroughly chill before topping. It is perfectly fine to make the day before and refrigerate (without the whipped cream). They will not suffer for it. Don't cover the pies until they are chilled (to avoid condensation dripping onto the pie), then loosely cover with plastic wrap.

Can these pumpkin pies be frozen? Yes they can! Allow to cool completely at room temperature or in the fridge, then transfer to the freezer, well wrapped. Thaw in the fridge overnight. 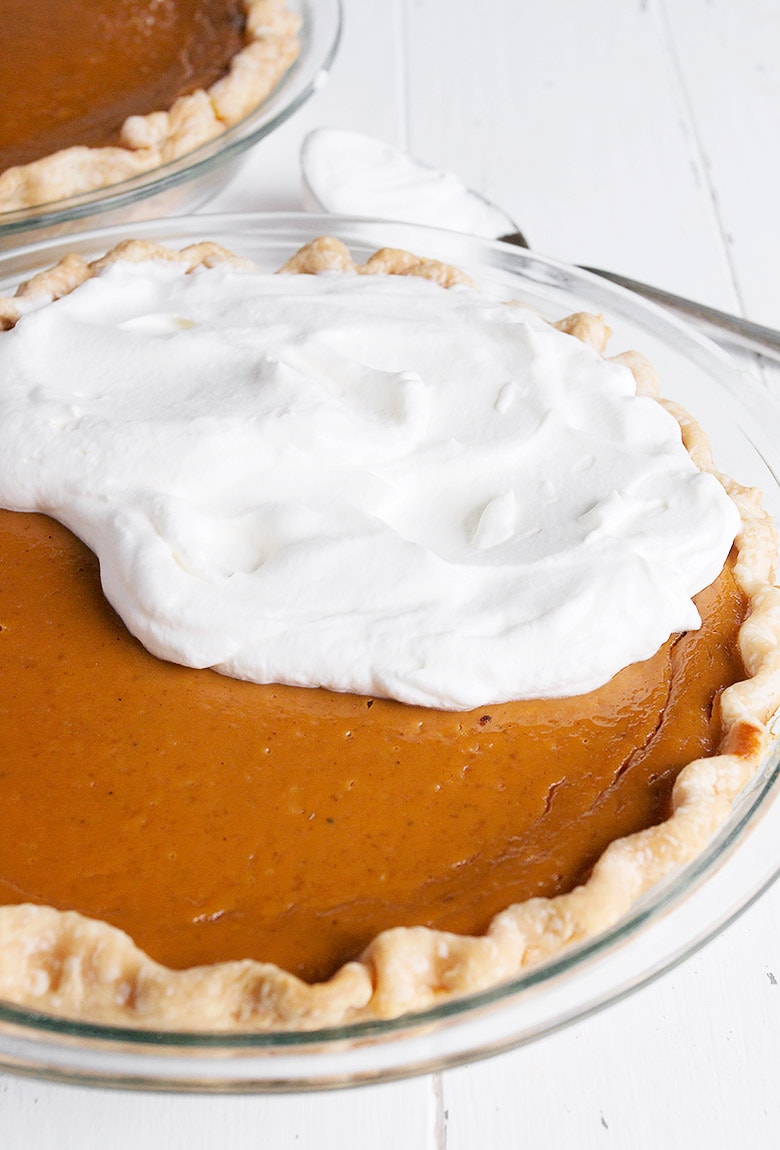 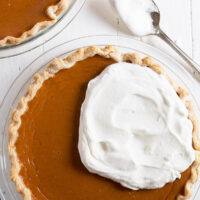 Makes 2 pies and assumes 8 slices/servings per pie. Be sure to read the “Ingredient and Cook's Notes" (above the recipe card!), where I share more detailed tips, variations and substitution suggestions for this recipe!