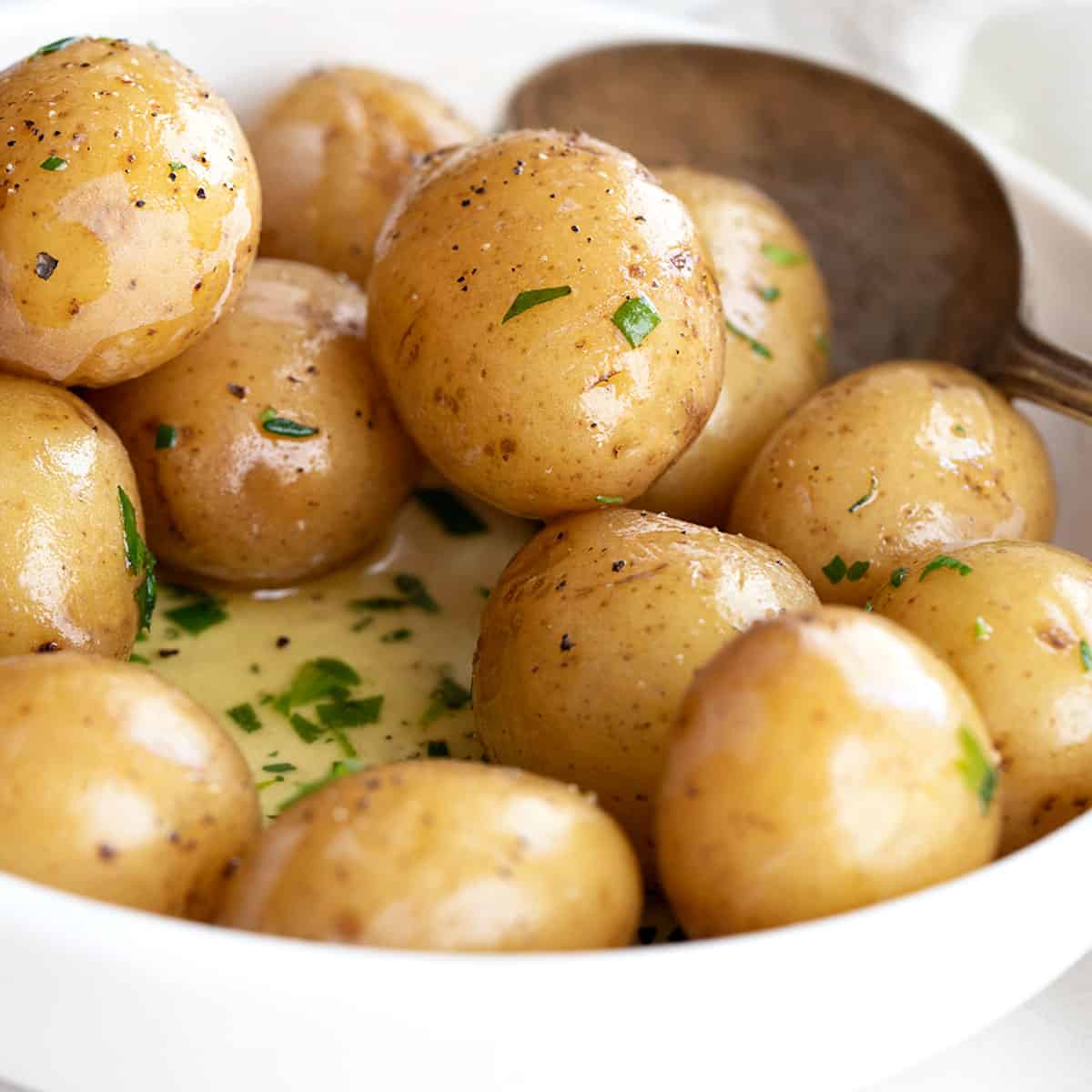 A super easy and delicious way to enjoy mini potatoes. Salt potatoes are boiled whole with lots of salt, for a salty, crusty outside and wonderfully creamy insides. Served with melted butter and herbs. 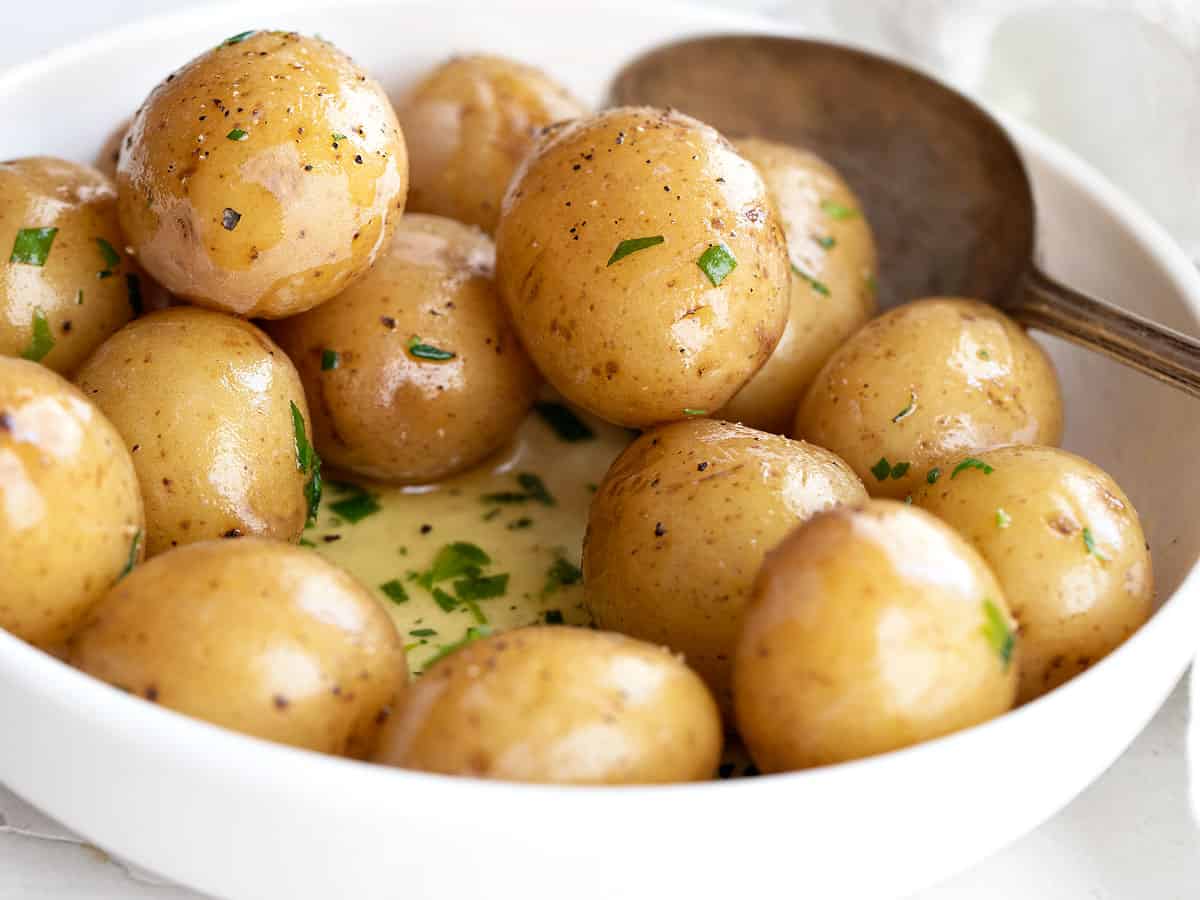 Salt potatoes are a longtime upstate New York favourite, but they are definitely worthy of wider enjoyment. These delicious potatoes are a great way to enjoy mini potatoes and make a great side for any meal.

Why would you want to boil potatoes in copious amounts of salt? Well, the salt raises the boiling temperature of the water, resulting in a super-creamy inside and a wonderfully flavourful, salt-crusted outside. And no, they are not super-salty potatoes, as they are boiled whole, the salt doesn't reach the inside of the potatoes. And as a bonus, the super salty water boils really quickly, too :)

Serve warm with some melted butter and add some herbs too, if you like.

Potatoes - mini potatoes are perfect for salt potatoes. Use yellow or red or a combination of both. Try to keep them similar in size, if you can, for even cooking.

You must boil them WHOLE, to avoid the salt from getting into the centre of the potatoes, which would result in overly-salty potatoes. Mini potatoes cook up perfectly and quickly, but that said, if you want to boil WHOLE, larger potatoes, you can certainly do that.

Salt - regular fine table or sea salt is fine here, or you can use Kosher salt in the same amount. There are a varying amounts of salt used in salt potatoes, but the standard would be around 2 Tbsp of salt for every 1 cup of potato boiling water. I've found anywhere from 1 1/2 - 2 Tbsp of salt per cup of water works just fine.

Herbs - while not traditional, I've always felt that these potatoes are tailor-made for some fresh herbs in the mix. You could also use some dried herbs (parsley, chives etc.), if you like. 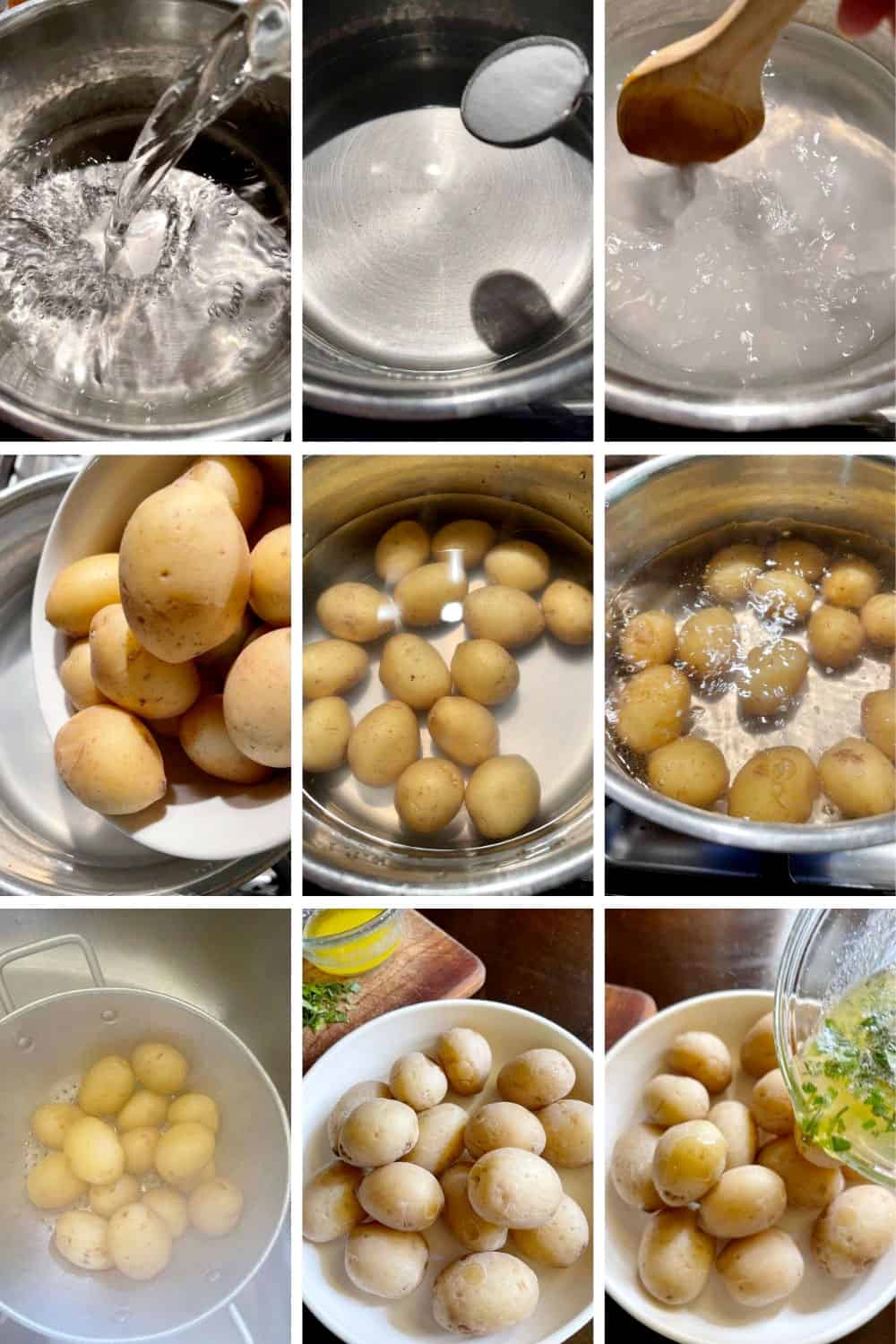 These easy potatoes don't really need step-by-step instructions, but I did want to show what the potatoes look like after being boiled. The effect isn't as easy to see on yellow potatoes, as it is on red potatoes, but they will have a matte glaze and small salt crystals on them once drained and dry. Toss with some melted butter and herbs, if you like and enjoy.

Can I use large potatoes and just cut them up? I'm afraid not. You must use whole potatoes for salt potatoes, so that the salt stays on the outside and doesn't transfer to the inside, where they would be too salty. That said, you can certainly boil whole larger potatoes if you like. You'll just need to boil them longer.

Can I double or triple the recipe? Sure! You can start with any amount of potatoes. Just measure the water you add to just cover the potatoes in the pot and then add 1 1/2 - 2 Tbsp of salt for every 1 cup of water used.

Can I make these in an Instant Pot? Apparently you can. Try about 2-3 minutes on high pressure for small potatoes, followed by a 15 minute natural release, then vent, drain and enjoy.

Do these taste really salty? No. As these are cooked whole, the salt only forms a thin film (and flavour) on the skin of the potatoes and doesn't transfer to the inside of the potatoes.

Other ways to enjoy Salt Potatoes

Traditionally, salt potatoes are served boiled in salt water, drained, allowed to dry, then tossed in melted butter. There are other ways to enjoy your salt potatoes though, which are especially good for left-over salt potatoes, with or without butter on them. 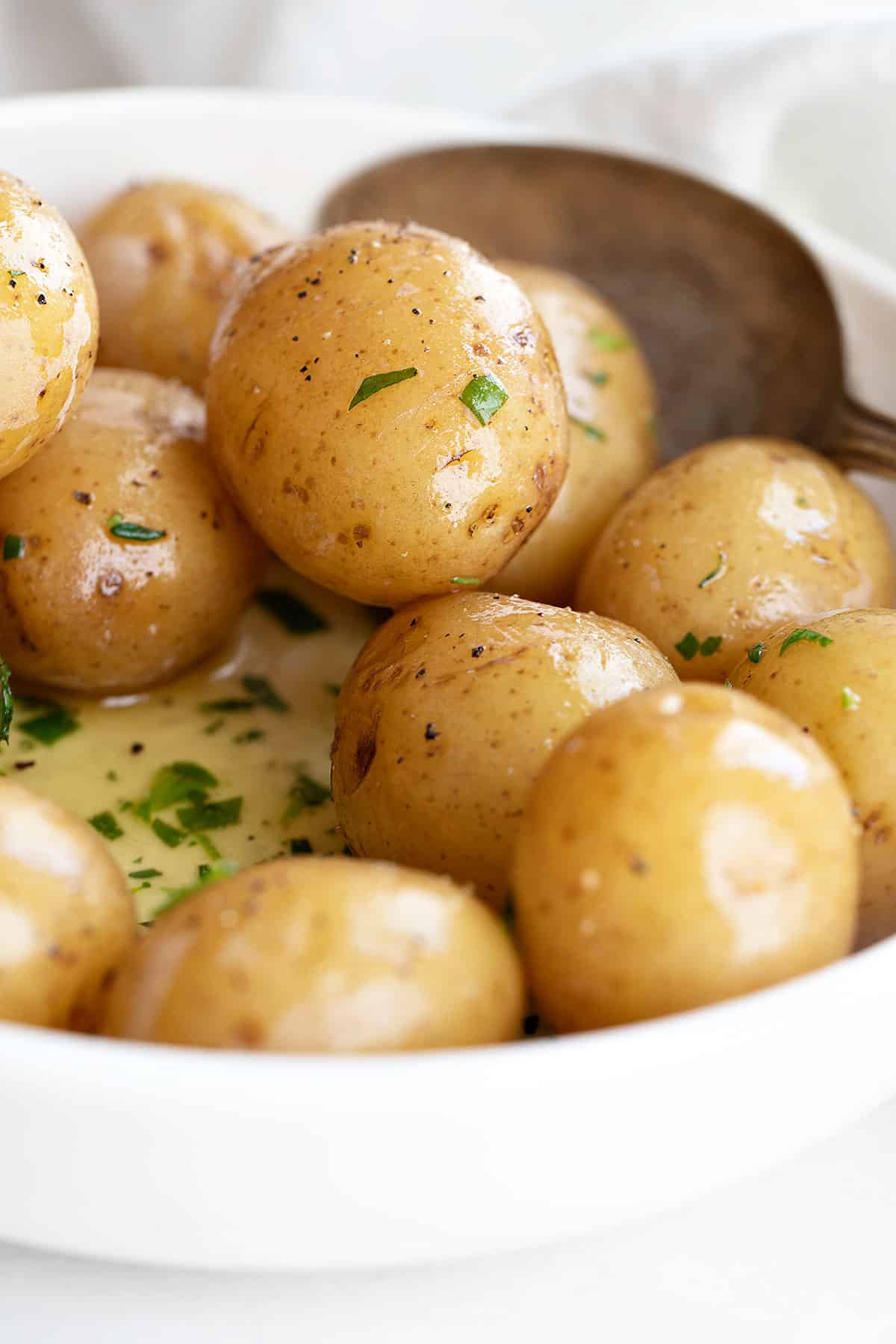 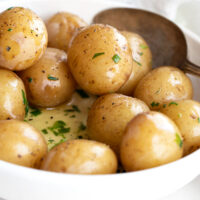 For topping after boiling:

1. Use anywhere from 1/3 cup to 1/2 cup of salt (or 1 1/2 - 2 Tbsp of salt for every cup of water used) to boil the potatoes, as you like. Experiment within this range. More salt will make a more salt-crusted finished potato. 2. You MUST use whole potatoes and whole mini potatoes are perfect for salt potatoes. That said, you can use larger potatoes, as long as they are boiled whole. Obviously, they will need to boil longer to become fork tender. NOTE: Nutritional Information may not reflect the exact amount of sodium, as it is impossible to calculate how much of the added salt transfers to the consumed potato. As mentioned above, you'll find the potatoes don't taste overly salty, so that is a good indication that it is a "normal" amount. That said, if you have health concerns around sodium consumption, you may wish to avoid, as the sodium content is difficult to quantify here. Be sure to read the notes above this recipe card, for more tips on making this recipe. 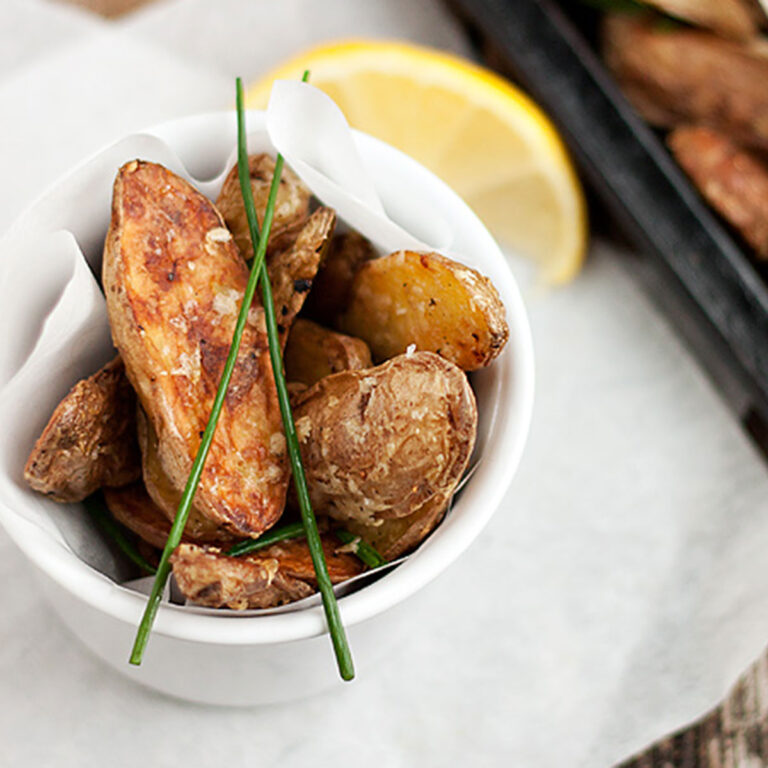 Parmesan Roasted Fingerling Potatoes
A simple, but delicious potato side dish, these crispy, oven roasted fingerling potatoes are topped with Parmesan and chives.
Get the Recipe
www.seasonsandsuppers.ca 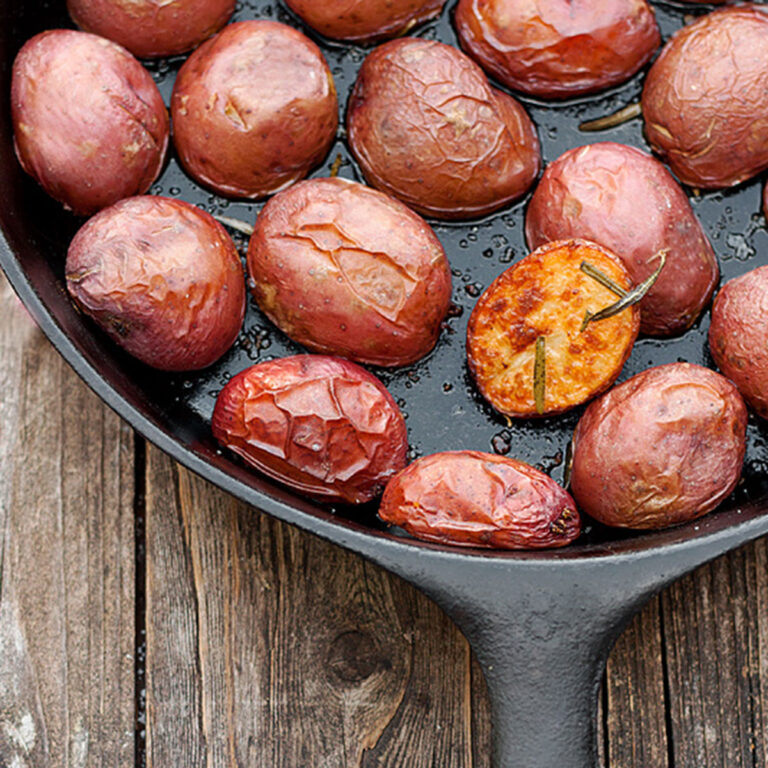 Crispy Skillet Roasted Mini Potatoes with Rosemary
Crispy potatoes, cooked in a cast-iron skillet with rosemary. A quick and easy side dish recipe for any time of year. Too hot to start the oven? Cook these on the BBQ.
Get the Recipe
www.seasonsandsuppers.ca