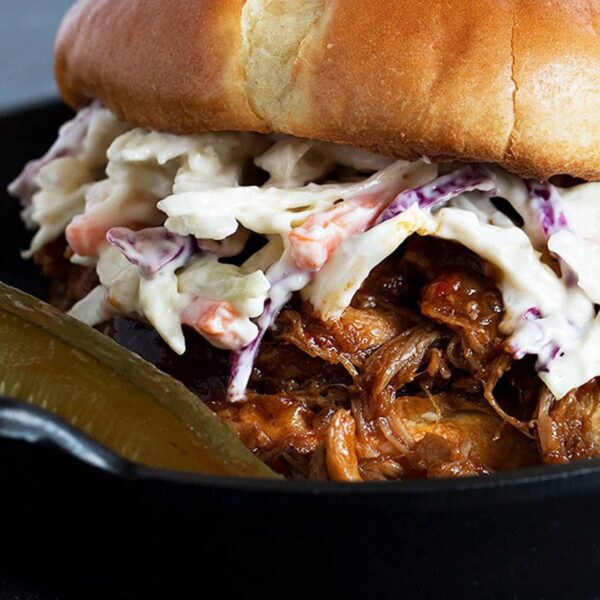 Easy and delicious slow cooker pulled pork. Can also be made on the stove-top or in the oven!
Jump to Recipe Pin Recipe
5 stars from 7 ratings

This easy and delicious slow cooker pulled pork, can also be cooked on the stove-top or in the oven! 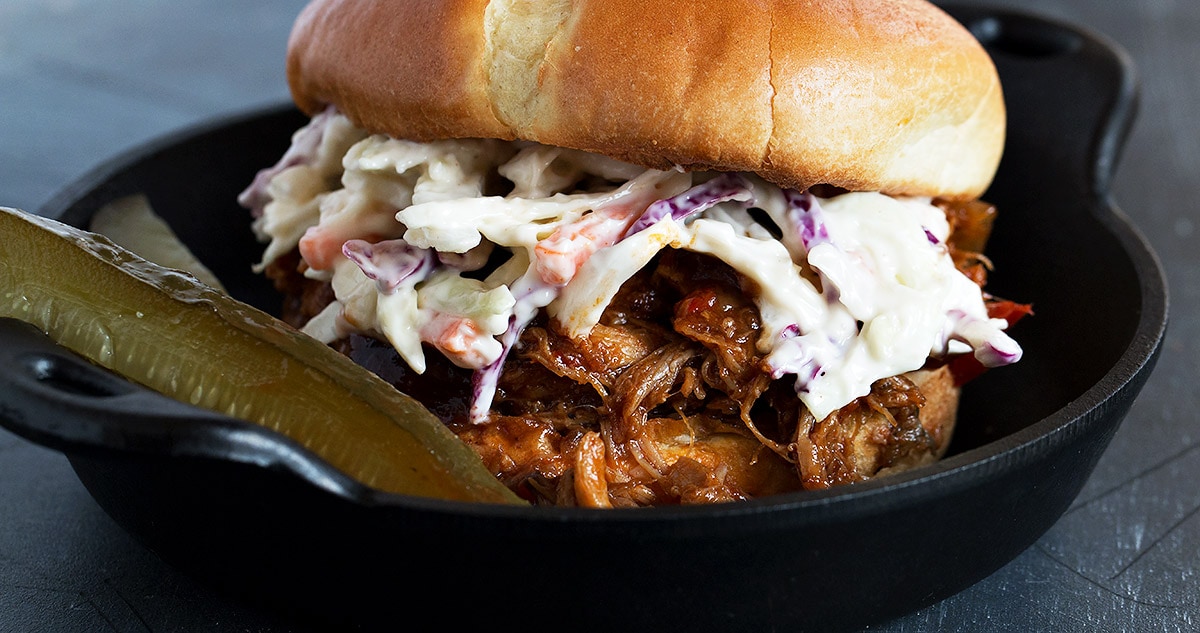 My favourite pulled pork recipe is both easy and delicious. I feel like it splits the middle of the pulled pork recipes I see around. It doesn’t feature any fancy rubs or require hours in a smoker. On the other hand, it doesn’t just rely on a “bottle of bbq sauce” either.

Despite the fact that I have called this “Slow Cooker Pulled Pork”, this dish can also be made on the stove-top or by popping into the oven to cook.

The slow cooker version is the absolute easiest, of course. Simply add all the ingredients and let it cook away. The stove-top and oven versions don’t require much more attention, but they do require the occasional peek. As a reward for your extra effort, the stove-top and oven versions will give a bit of extra flavour from the browning in the pan. Pick whichever method suits you at the time.

What is the best cut of pork to use for pulled pork?

The best pulled pork starts with a pork shoulder (also sometimes called pork butt or Boston butt). They are easily recognizable for the fat marbling between the meat. You can go with a bone-in pork shoulder or one that is wrapped in netting. (Be sure to remove the netting before you start cooking, though).

A boneless pork loin roast will technically work for pulled pork, though the pork will not shred as nicely, will not be as quite moist and you will miss the extra flavour of the fat of the pork shoulder.

Pork: As noted above, a pork shoulder roast (bone-in or boneless) is your best choice for the best pulled pork. If the pork roast is netted, remove the netting before cooking. I also like to cut off and discard any large pieces of fat or the skin, if present, from the roast, before cooking.

Tomato Paste: This is just the standard sized small can of tomato paste.

White Vinegar: If you don’t have white vinegar, cider vinegar is a good substitute here.

Chili Powder: This is just the common chili powder that you would use to make a pot of chili. If you’d like to add a bit of smokiness to your pulled pork, add a bit of chipotle chili powder.

Worcestershire Sauce: A nice addition to this dish, though not a deal-breaker if you don’t have any on hand. You can substitute about 1 1/2 tsp of soy sauce and a pinch of garlic powder.

For the slow cooker: I usually cook on High in the slow cooking, allowing it to cook, covered, for 4-5 hours. Check at 4 hours and test the meat. If it doesn’t shred easily, cook some more. If you need it to cook longer, simply reduce the heat to start and cook longer.

For the stove-top: Simply add all the ingredients to a large, heavy-bottomed pot, such as a Dutch oven. Cook covered over medium-low heat for 3-4 hours, or until the pork shreds easily. *I like to stir and flip the meat over every 30 minutes or so at first, to avoid any scorching on the bottom of the pan.

For the oven: Simply combine all ingredients in an oven-proof pot with a lid and cook in a preheated 325F oven for about 3 hours. *I like to stir and flip the meat over every 30 minutes for the first hour, to avoid any scorching on the bottom of the pan.

For all methods, once the pork is cooked to shreddable form, remove the large chunks of meat to a cutting board and shred with two forks, discarding any large chunks of fat and the bone, if you started with a bone-in roast. Return the shredded meat to the slow cooker or pot and cook, UNCOVERED, for a further 40-45 minutes, or until the sauce has reduced and thickened.

You Might Also Like! For a Fall twist to your pulled pork, try my Apple Pulled Pork.

For making ahead, allow pulled pork to cool slightly, then cover and refrigerate up to 4 days.

Making Pulled Pork in the Slow Cooker: In Pictures 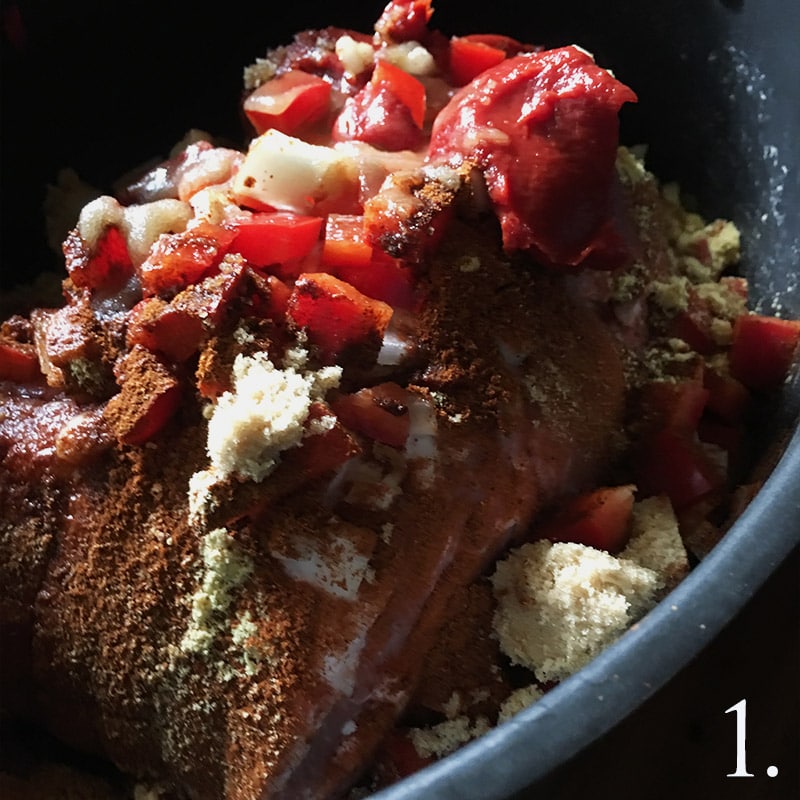 1. Simply add all the ingredients to your slow cooker. No need to brown the meat. If your piece of pork is too large to fit, cut into large chunks. Cover and cook on High for about 3-4 hours or on Low for 6-8 hours. 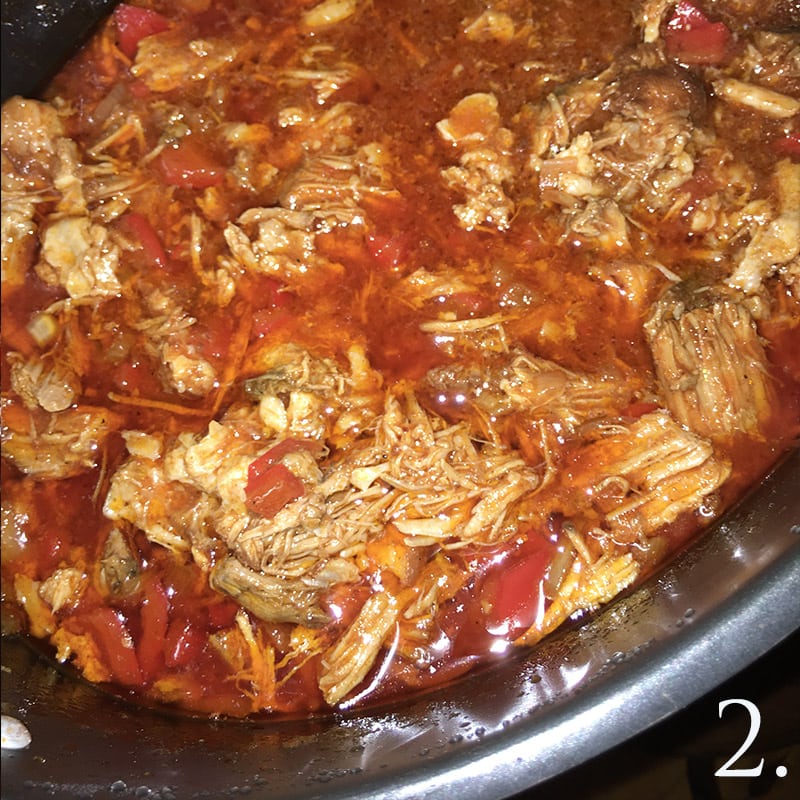 2. After cooking, remove the chunks of meat and shred them with two forks. This is how it will look when you return the shredded pork to the slow cooker. Continue cooking with the lid off, until the sauce cooks down and thickens, about 45 minutes more. 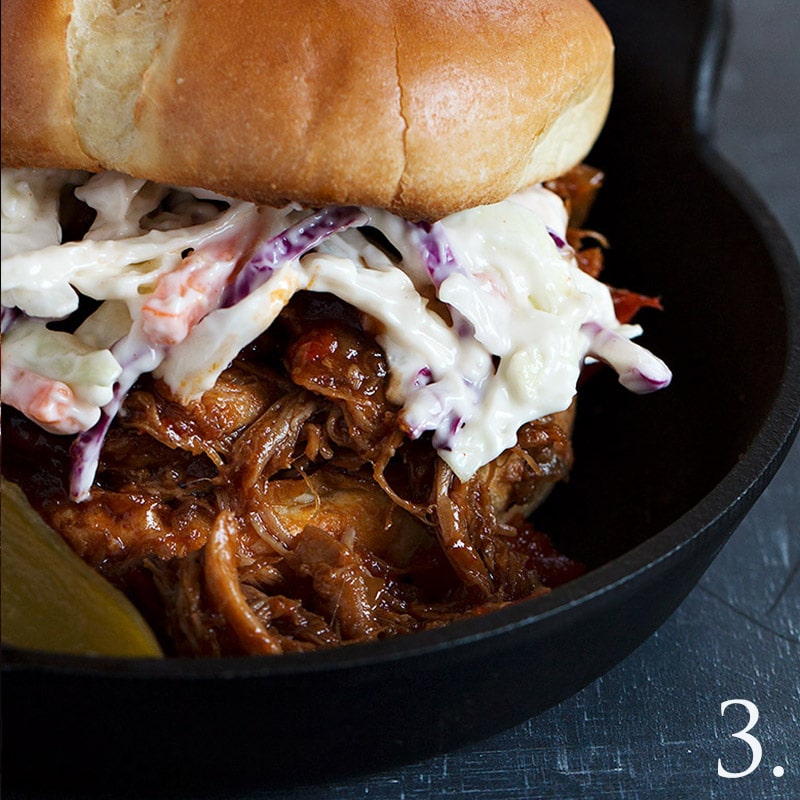 3. And this is how your luscious pulled pork will look after it cooks uncovered and thickens up. Then simply pile it in between a bun (coleslaw optional, but always a good idea :)

What to do with your pulled pork beyond sandwiches

Pulled pork is lovely on a bun, with coleslaw or enjoy it open-faced on toasted bread.

Try pulled pork on any of the following Mexican-style dishes: tacos, quesadillas, taquitos or tostadas.

And finally, Canadians have been known to top poutine with pulled pork now and then :) 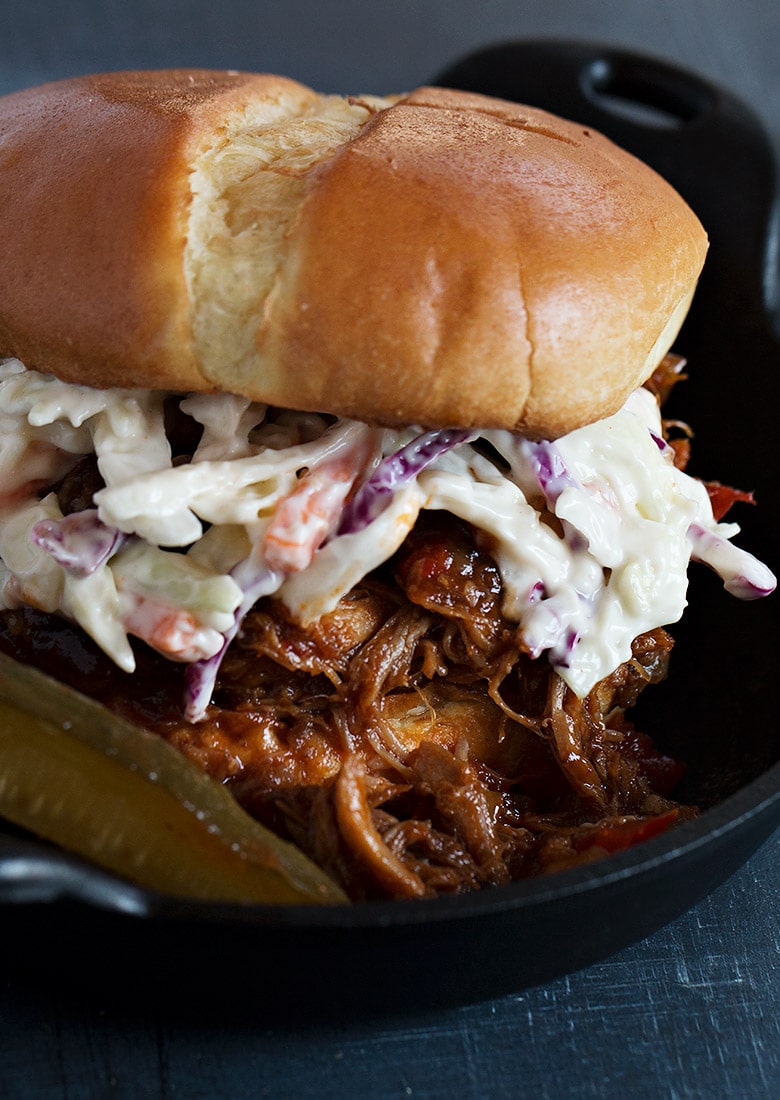 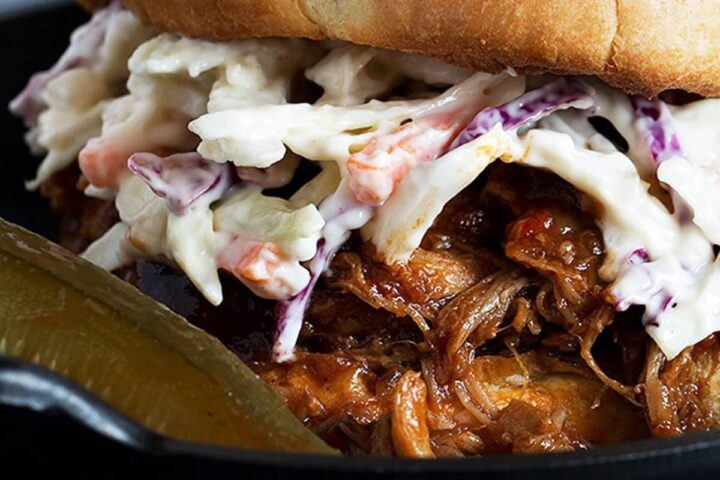